Tehran and its partners around the world are looking at a number of ways to get around the economic consequences of US sanctions which are expected to kick in later this year.

The Directorate for Scientific and Technological Affairs of the Presidential Office, a powerful Iranian agency charged with scientific matters, has plans to create a domestic digital currency, PressTV has reported, citing local media.

Alireza Daliri, the Directorate's deputy for management and investment affairs, said that a large number of Iranian knowledge-based companies working in cooperation with the Central Bank of Iran have the expertise to create a national cryptocurrency, but noted that some time would be necessary to remove any possible pre-launch bugs.

"We are trying to prepare the grounds to use a domestic digital currency in the country," Daliri said. "This currency would facilitate the transfer of money (to and from) anywhere in the world. Besides, it can help us at the time of sanctions," he added.

© AFP 2019 / BEHROUZ MEHRI
Iran Unlikely to 'Roll Over' in the Face of Trump's Threats – Analyst
Earlier this year, Iran's Ministry of Information and Communications announced that Iran had created an "experimental model" version of a state cryptocurrency. The announcement came after the Central Bank banned the use of Bitcoin and other cryptocurrencies in the Islamic Republic amid concerns that they were being used for money-laundering.

In April, Information and Communications Technology Minister Mohammad Javad Azari-Jahromi said that the Iranian cryptocurrency would help Iran circumvent sanctions if it went live. "All cryptocurrencies are capable of circumventing sanctions, because they are not under the supervision of the US financial regulatory body, and the national digital currencies are naturally capable of this," he said. 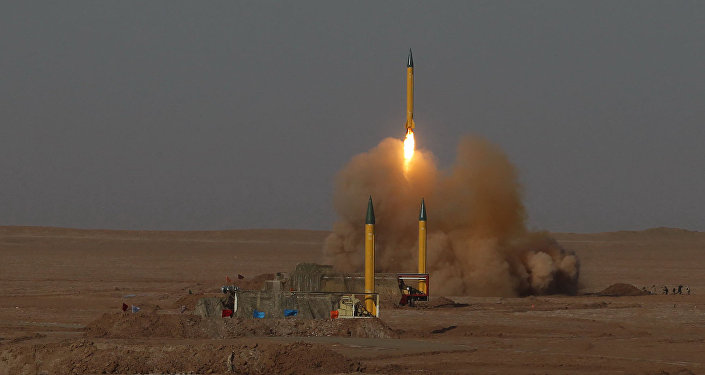 © AP Photo / Fars News Agency
Iran's Revolutionary Guards Vow 'Easy Response' to US Oil Threats
In May, President Trump withdrew the United States from the 2015 Joint Comprehensive Plan of Action (JCPOA) and promised to reimpose US sanctions which had been lifted as part of the nuclear deal. The sanctions include a ban on Iran's purchase of US dollars (a major currency used for world trade), set to come into force next month, as well as sanctions against countries or companies which purchase Iranian crude oil. The latter are expected to step into force in November.

Iran is one of several countries experimenting with digital currencies amid political and economic pressure from the United States. Earlier this month, Venezuela announced that it would issue 100 million units of an oil-backed digital coin dubbed the 'Petro' worth $6 billion to get around liquidity shortages caused by US sanctions.