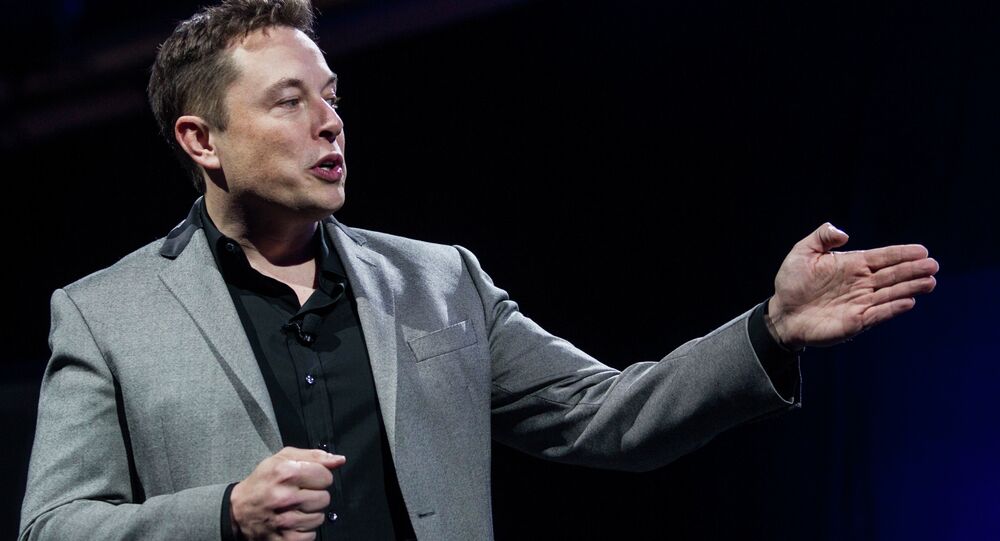 Tesla CEO Under ‘Firestorm’ Begs an Environmental Nonprofit for Support

Embattled Tesla chief executive officer Elon Musk attempts to divert attention from his “pedo” comments and controversial donations to the GOP by publishing his environment efforts.

Musk, facing a backlash over calling one of the divers from the Thai cave rescue a "pedo," dialed the head of an environmental group called the Sierra Club and asked them to help deflect the criticism by publishing his donations to the group.

As Sputnik reported earlier, Musk called Vernon Unsworth, a Thai diver of British origin, a "pedo" in a series of Twitter comments after the diver called Musk's child-sized rescue submarine a "PR Stunt." Musk later deleted the tweets and posted what Gizmodo called a "half-assed apology" in the form of a comment under another person's tweet. Musk's outburst has already cost Tesla a 3 percent plunge in its market shares, and the company's investors have demanded an apology.

© AP Photo / Ringo H.W. Chiu
‘Fault is Mine’: Elon Musk Apologizes for Calling British Diver ‘Pedo’
Apparently, the attempts to repair the damage haven't gone well, as Musk has turned to the Sierra Club in what appears to be an attempt to hastily mitigate the damage to his public image.

Musk also asked Sierra Club Executive Director Michael Brune to vouch for him on Twitter after news emerged of his $38,900 donation to the Republican Party PAC, which sparked a "firestorm," according to Bloomberg.

This information comes from an email Brune sent to his staff, as reported by Bloomberg. According to the email, in a call that took place Saturday, the Tesla CEO asked the Sierra Club to publish his donations, totaling some $6 million, which had previously been anonymous.

Musk "asked for some help via Twitter, not about the PAC donation but to buttress the criticism that his commitment to ending fossil fuels was fake," Brune wrote in the email. "I agreed."

Brune acted by publishing two tweets from his own personal account and one from the Sierra Club handle.

We're proud of Elon's support of our work. — and, we will continue vigorously fighting the climate deniers in the GOP. But Elon's innovation and leadership on climate cannot be denied.

​This backfired on him, as some of his own staff found Brune's action inappropriate.

There have got to be better topics of debate than whether @elonmusk is committed to climate action. He has dedicated his career to the mission of replacing fossil fuels with clean energy & has strongly backed the Sierra Club's advocacy work. We are proud to have his support.

​"Brune is now dealing with blow-back within his own organization for complying with Musk's requests. [The tweets] rankled some Sierra Club staff," Bloomberg writes. "They objected to Brune's defense of an executive who funds Republicans and has bashed the United Auto Workers."

© REUTERS / Joe Skipper
British Diver Considers Suing Musk for His 'Pedo Guy' Verbal Attack
In his letter to the staff, Brune argued it was Musk's right to ask to make his anonymous donations public, and that Brune would have granted the same wish to any donor.

"I appreciate the concerns that I've seen online and in email that the tweets may be at odds with our support for workers' rights and defeating the GOP agenda across the country," Brune wrote in an email to his staff on Tuesday. "I don't agree, but I see the risk and understand the concerns. Musk has made unhelpful anti-union statements and Tesla's labor practices are also cause for concern, so I take your comments seriously."

"As this well-written article suggests, my words were spoken in anger after Mr. Unsworth said several untruths & suggested I engage in a sexual act with the mini-sub, which had been built as an act of kindness & according to specifications from the dive team leader," he tweeted.

Nonetheless, his actions against me do not justify my actions against him, and for that I apologize to Mr. Unsworth and to the companies I represent as leader. The fault is mine and mine alone.

​Despite that clarification, Unsworth is still considering filing a lawsuit for unfounded claims, Gizmodo reports.