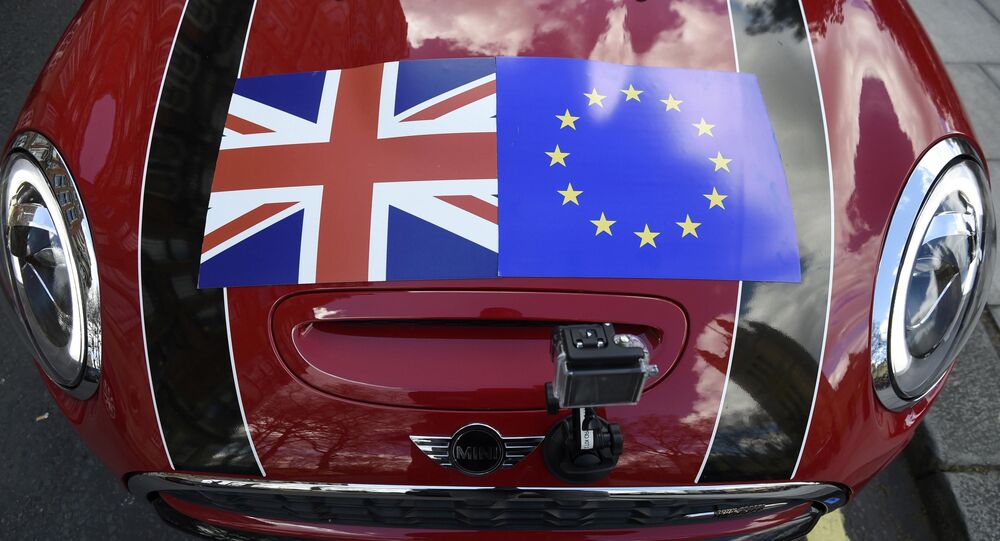 A British lobbying group representing auto manufacturers is urging the May cabinet to change its position on Brexit and remain in the EU’s customs union – but this bid has been deemed unrealistic.

Kristian Rouz – A new report from the UK’s automotive lobbying group has suggested that investments in the car sector have dramatically declined over the past two years due to Brexit uncertainty. The group is now calling on Prime Minister Theresa May to take urgent steps to reassure investors by remaining in the EU’s customs union.

According to the Society of Motor Manufacturers and Traders (SMMT), investments in British car production had dropped to 347.3 million pounds ($461.1 million) between January and June 21of 2018. This compared to a total investment of 647.4 million pounds in the first half of 2017.

These figures include investments into new facilities, equipment, tools, models and model development.

"There is growing frustration in global boardrooms at the slow pace of negotiations," said Mike Hawes of SMMT. "Government must rethink its position on the customs union."

This comes after the Conservative and Unionist cabinet unequivocally said the UK would leave the customs union as part of the Brexit process.

© CC BY 2.0 / muffinn / Brexit sailing apart - bon voyage
London 'Delighted With Excellent Progress' on Brexit - UK Minister
Such a stance is motivated by considerations of the broader UK manufacturing sector, which has greatly benefited from the pound sterling’s devaluation and the disruption of trade ties with the EU rendering British products more competitive on the international market.

Prime Minister May is still trying to unite members of her own party to come up with a single view of Brexit. As of now, the most avid Brexiteers – led by North East Somerset MP Jacob Rees Mogg – have accused PM May of "appeasing" the EU and betraying the spirit of Brexit, as the hardliners are demanding economic ties with the continent be restricted under a "no deal" scenario.

Other Conservatives, however, have suggested the UK could reach a compromise deal with the EU, allowing for the existing trade ties to remain intact.

"The current position, with conflicting messages and red lines goes directly against the interests of the UK automotive sector which has thrived on single market and customs union membership," SMMT’s Hawes said.

The EU’s customs union comprises 28 EU member states enjoying free and unrestricted trade within the bloc, but has common imports tariffs on non-EU goods. Hawes stressed that the May cabinet’s current plan to leave both the single market and the customs union would severely affect UK carmakers.

However, Brexit hardliners have said that struggling British industries will find new export opportunities after the UK leaves the EU in March 2019, as London will be free to negotiate new trade deals on its own behalf. Such deals are prohibited under EU rules, as all member states operate as part of the single market, administered by Brussels.

Hawes, however, challenges this premise.

"There is no credible ‘plan B’ for frictionless customs arrangements," he said. "Nor is it realistic to expect that new trade deals can be agreed with the rest of the world that will replicate the immense value of trade with the EU."

© REUTERS / Henry Nicholls
Ex-UK Cabinet Members to PM May: Brace Yourself for 'No Deal' Brexit
The UK’s exports totaled $1.1 trillion in 2017, with some 52 percent going to the EU. PM May is seeking a free trade deal with the bloc, which would allow the UK to maintain its privileges in bilateral trade without being a member of the single market or the customs union.

Some say the SMMT’s demands are unrealistic, as the UK would not be able to negotiate new trade deals independently if it remained in the EU’s customs union.

Trade deals with countries such as the US, members of the British Commonwealth and Asia-Pacific nations are a high priority for the May cabinet – with talks expected to commence in the immediate aftermath of Brexit next March.