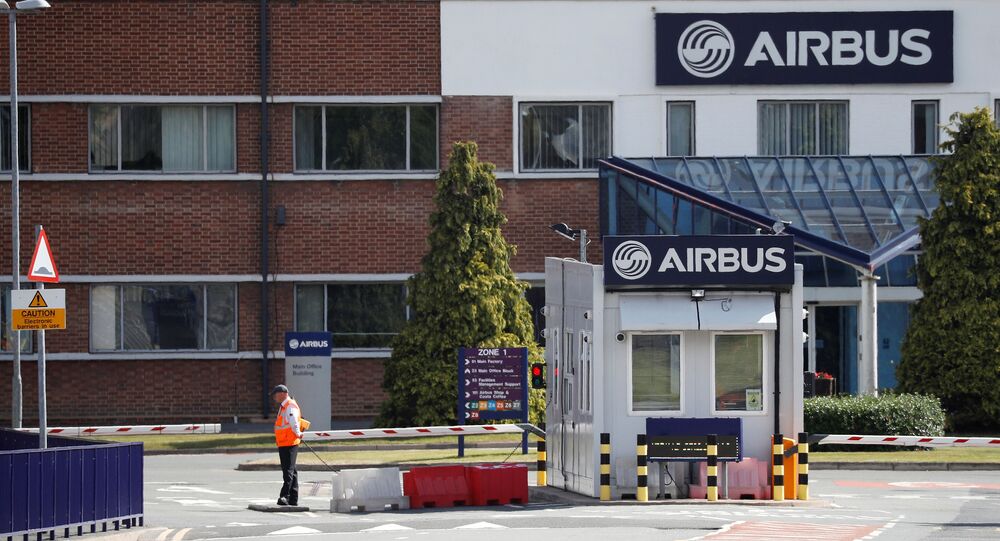 The multinational manufacturer of both commercial and military aircraft has piled additional pressure on the UK government, encouraging it to ensure Britain doesn’t leave the European Union (EU) without a transition agreement and comprehensive post-Brexit trade deal.

Airbus warned that it could relocate its UK facilities elsewhere, shedding thousands of jobs across the country, if Britain withdraws from the trading bloc’s customs union and single market without an alternative arrangement in place, The Independent reported on Friday.

"This scenario would force Airbus to reconsider its investments in the UK, and its long-term footprint in the country," the corporation said in its Brexit risk assessment, which was published on Thursday.

© AFP 2020 / Frederick Florin
Illegal EU Funding Persuaded Airbus to Threaten UK Over Brexit – Nigel Farage
They also warned that exiting the EU without a transition deal would “lead to severe disruption and interruption of UK production.”

It said that the warning is not an attempt to cause panic but is the “dawning reality.”

The chief operating officer (COO) of Airbus Commercial Aircraft, Tom Williams, also said Brexit will have “severe negative consequences” on the UK’s aerospace industry in any scenario, though he was most alarmed by the prospect of a hard Brexit.

"Put simply, a no-deal scenario directly threatens Airbus' future in the UK. We are seriously considering whether we should continue that development [next generation aircrafts in the UK] or whether we should find alternative solutions," he said.

Meanwhile, on Friday morning, a spokesperson for UK Prime Minister Theresa May said the government has had “good dialogue” with Airbus and the aviation industry as a whole, and will continue discussions with them.

The aerospace mammoth employs around 14,000 people at 25 manufacturing plants and other commercial facilities in Britain.

Furthermore, if Airbus opted to cease its UK operations, there would be wider adverse economic consequences, with some 110,000 potentially at risk in the supply chain as they rely on Airbus in some form, to varying degrees.

© AFP 2020 / JOHN D MCHUGH
CBI President Slams UK Government’s Brexit Strategy, Says Car Industry at Risk of ‘Extinction’
Earlier this month, the outgoing head of the Confederation of British Industry (CBI) said parts of the UK’s manufacturing industry could be damaged to the point of extinction by a no-deal scenario.

Britain is due to enter a transition period with the EU from March 2019 until the very end of 2020. This period is intended to allow businesses to get acclimated to the new trading environment and make necessary changes based on their individual circumstances and preferences.