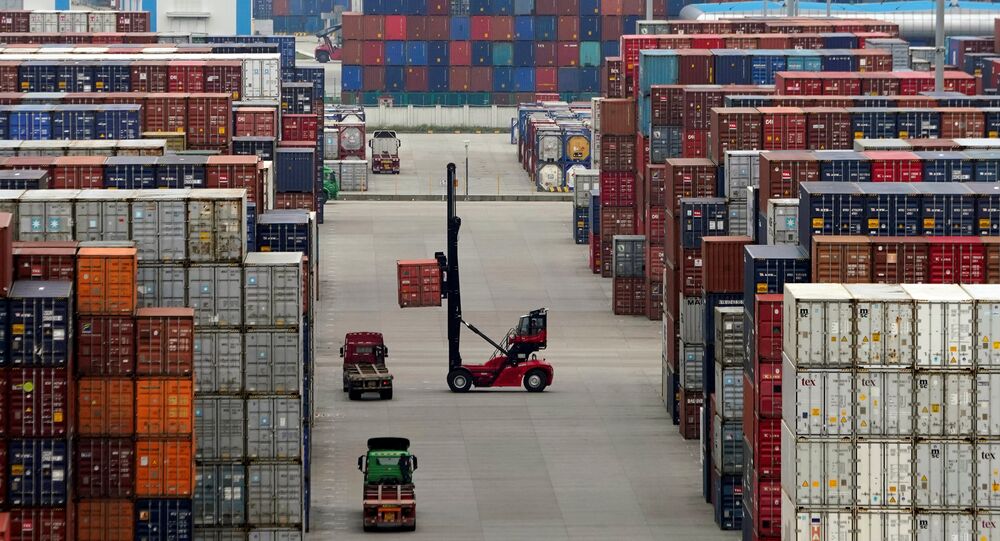 If Beijing decides not to escalate the tariff war with Washington, it still has a plenty of instruments to hit the US where it hurts, including boycotts and the long arm of state bureaucracy and regulation, experts warn.

The Chinese economy has plenty of ways to counter US President Donald Trump's import tariffs apart from simply imposing parallel measures, writes Politico's authors Adam Behsudi and Doug Palmer, that have been used in the past and proven to be very effective. Have extra tools should help China in its growing trade war with the US, as conventional responses like imposing new tariffs on US imports, are going to quickly run out.

Chinese nationals are keen to take cues from their government about boycotting foreign imports, so Beijing may discourage people from buying American products, Politico suggests. This happened last year when South Korea said it was going to deploy a US missile defense system: people in China eagerly boycotted Korean-made Hyundai cars, refrained from taking trips to South Korea, dropping the market by more than 60 percent, and ignored the Korean-owned Lotte supermarkets, forcing a temporary shutdown of some 55 stores.

© REUTERS / Kay Nietfeld, Pool
US Aims to Drive Foreign Investments Out of China Through Trade War - Analysts
With the US, there are also a plenty of options, such as US trademark fast food chains like McDonalds and Starbucks. With almost 1.4 billion consumers, the Chinese market is an enormous asset for any company, and for those companies already rooted in the People's Republic of China, the immediate loss of such a market is going to hit them pretty hard.

"It could get quite ugly," said Deborah Elms, founder of the Asian Trade Center, a trade consultancy based in Singapore. "The nightmare scenario for firms might not even involve the government. What happens if Chinese consumers start boycotting American products? Stop drinking Starbucks? Wanting iPhones?"

The government could simply signal that it would like consumers to "stop shopping at KFC or stop buying American products, whatever they might be," says Bill Reinsch, a senior adviser at the Center for Strategic and International Studies.

According to Politico, this simple action would ruin Starbucks' plans to double the 3,300 stores it already has in China. It would dent General Motors' 8 percent growth in the country last quarter as well as derail "any number" of business plans by smaller US companies.

Besides a consumer boycott, China could impose slight, but annoying changes to consumer-level banking systems, introducing small changes into how the bank accounts of US nationals are managed. On a higher level, China can make it harder for US companies to set up their accounts as well.

"When you walk into a bank as an employee of a foreign or US company, you could experience small regulatory changes, just in terms of how your own account is handled," said Karla Klingner, CEO of Palindromes, Inc, a holding company that does business in the agriculture and logistics sectors in China.

© AP Photo / Ju Peng
Balancing Act: N Korea's Kim Praises ‘Unity’ With China in Wake of Meeting Trump
And then there are customs, whose inspection protocols include a plethora of rules that are usually not applied on practice. If so inclined, the Chinese government could "ask" customs officials to apply them all rigorously.

"Between now and then, the government can easily ask for more careful customs inspections, look over documentation more slowly and enforce a myriad of rules on the books that are never used," Elms said.

Beijing can also claim that all US businesses are liable for taxes in China, suggests Hosuk Lee-Makiyama, director of the European Center for International Political Economy, a Brussels-based think tank.

And if that is not enough, the Chinese government can disrupt US companies' supply chains, CSIS' Reinsch says. In practice, that would mean an inspection at Foxconn's production facility that just so happens to find some "violations," shutting down all iPhones production for some three months. And iPhones are by far not the only electronic devices produced at Foxconn factories, either.

All US business operations in China combined, China is a $550 billion market for US companies, says Erin Ennis, senior vice president at the US-China Business Council — far more than the billions of dollars' worth of exports that lay on the surface.

"There are a variety of ways that China could escalate," Ennis says. "Licensing could begin to be slowed down. Companies could face higher levels of scrutiny for their products at ports coming in."

© AP Photo / Haven Daley
France in S China Sea Puts Own Interests Instead of Countering Beijing - Analyst
However, other experts say we should expect China to act as restrained as possible. It is in Beijing's interests to keep good publicity and make the US smear themselves as a trade aggressor.

"I think China still has an interest in trying to be seen here as playing by the rules," Politico quotes Edward Alden, a senior fellow at the Council on Foreign Relations, as saying. "Proportional responses make it easier for you to argue that you have been operating within the spirit of World Trade Organization rules."

The best part for Beijing here is that there are always other companies — from Japan, EU, Korea, Russia, you name it — who are eager to snatch the US' share of the Chinese market for themselves. If American companies suffer thanks to Washington's behavior, China can simply swap them with others and go on as before.

"What are the Chinese going to do when they retaliate? They're going to say, ‘we can easily take this US company out here because we've got a Japanese company, or a Korean company, or a European company ready to come in and do the same kind of business here,'" says Rufus Yerxa, a former US trade official who now serves as president of the National Foreign Trade Council. "I think that's a very credible scenario of how all of this plays out."