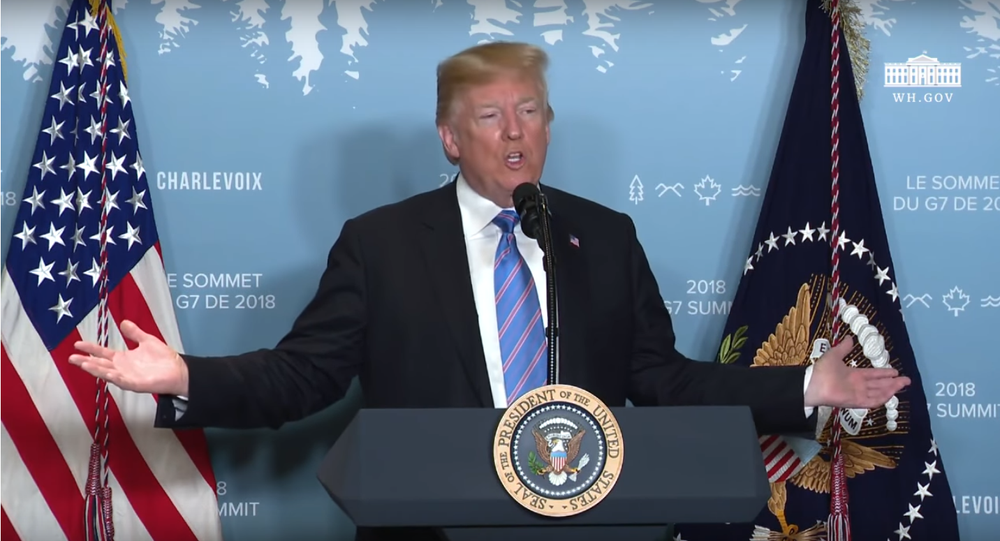 The proposal comes following two days of testy back-and-forth comments on trade between the US president and Washington's Canadian and European allies.

"No tariffs, no barriers – that's the way it should be. And no subsidies. …That would be the ultimate thing, whether or not it works, but I did suggest it," President Trump said in a press conference in Quebec on Saturday prior to his departure for Singapore.

"In other words, let's say Canada, where … the United States pays tremendous tariffs on dairy as an example — 270% — nobody knows that … we don't want to pay anything. Why should we pay? Ultimately that's what you want – you want a tariff-free [zone], you want no barriers, and you want no subsidies because you have some cases where countries are subsidizing industries and that's not fair."

Blaming past US leaders for "decades and decades" of bad trade deals with the US's G7 allies, which have led to hundreds of billions of dollars in trade deficits, Trump stressed that "those days are over" and promised to continue his hard-edged approach on trade to straighten out outstanding issues. "There is no reason we should have large trade deficits with virtually every country of the world," he said.

Trump also suggested that Friday and Saturday's summit had been "very, very successful," and dismissed claims of tensions between the US and other nations, describing their relationship "a 10."

The president traded barbs with Canadian Prime Minister Justin Trudeau, French President Emmanuel Macron and other leaders ahead of and during the summit, repeatedly accusing allies of putting "massive tariffs" on American goods. Macron asked whether Trump cared about the US "being isolated," and alluded to a possible "G6" without US participation. European Council President Donald Trump accused Trump of challenging the "rules-based international order," and suggested his policy "makes no sense at all."

© REUTERS / Leah Millis
G6+1: Rift Between Trump and His EU Allies, Canada Steadily Deepening
The summit comes amid the imposition of US steel and aluminum tariffs affecting all nations including Washington's NAFTA and EU partners.

The G7 summit of developed Western economies, namely the US, Germany, Japan, the UK, France, Italy and Canada wrapped up Saturday in the Quebec town of La Malbaie.