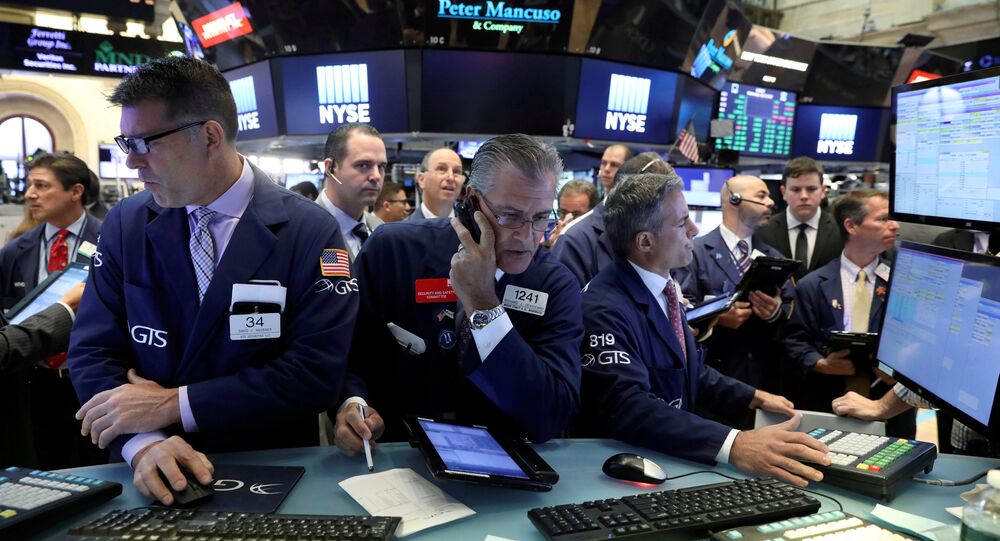 Following the slump of European stocks, US and Asian markets have sunk amid fears over the future of the euro fueled by political anxiety in Italy. The possibility of new elections in Europe’s fourth largest economy looms large after the Italian president rejected a list of potential ministers, proposed by the anti-establishment parties.

As the end of its  worst day since April 24 in terms of percentage, the Dow Jones index slipped nearly 400 points, or 1.6%, depressed over political uncertainty in Italy and a new round of trade tensions between the US and China.

The Standard & Poor’s 500-stock index dropped by 1.16% to 2,689.86, while the NASDAQ plunged 0.5% to close at 7,396.59. This followed the slump of European markets on May 29, when the Milan stock index fell by 3%, with Italian bonds seeing a decline reminiscent of the 2011 financial crisis.The major indexes in Frankfurt, London and Paris also fell, as the yields on 10-year British, French and German bonds plunged. The euro also hit its lowest mark against the dollar this year.

The plunge followed a failed attempt to form a government in Italy. Europe’s fourth-largest economy (the third one, using the euro) and a Eurozone founding member was sent into political uncertainty after the country’s president Sergio Mattarella rejected the Cabinet team proposed by the anti-establishment coalition of the euro-sceptic Lega party and the Five Star Movement (M5S). The list was cast aside due to the candidacy of Paolo Savona for the post of economy minister. According to the president, Savona's views on the EU’s monetary policy could "threaten Italy's membership of the Eurozone."

READ MORE: Interfering in Italy's Democracy… and It's Not Russia

Mattarella appointed former International Monetary Fund official, economist Carlo Cottarelli, as interim prime minister, giving him the mandate to form a new cabinet. Cottarelli stated that he would bring about a new election in Italy as early as this fall if he doesn't win a confidence vote in the parliament.

In the Italian parliamentary election, held on March 4, none of the parties obtained a majority of votes required to form a government. The Lega party, the center-right Forza Italia, led by former Italian PM Silvio Berlusconi, and the Brothers of Italy movement, who eventually built the center-right coalition, received 37 percent of the vote, which allowed them bring up their proposal for the future Cabinet.  The Democratic Party won some 20 percent of the vote.