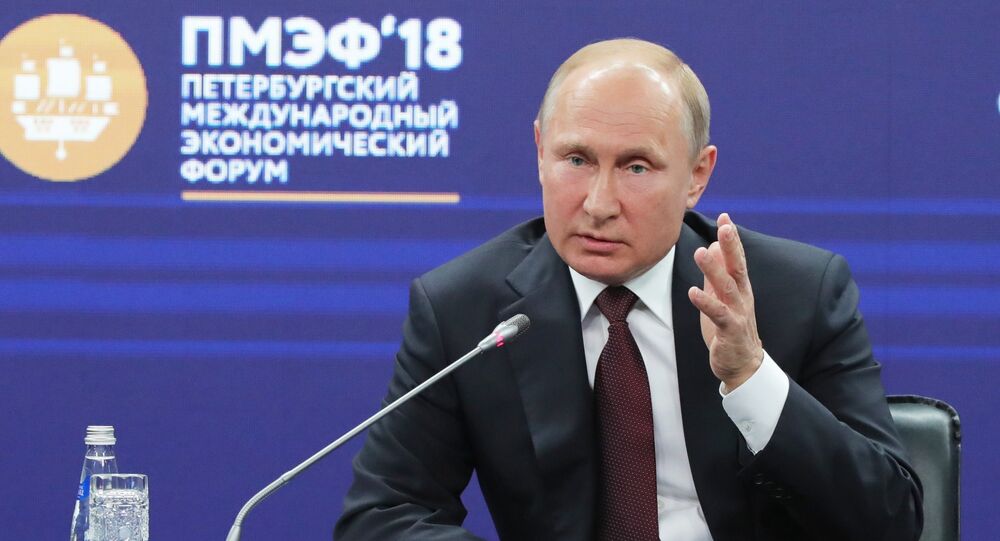 Counter-Sanctions Bill Will Not Affect Foreign Investors in Russia - Putin

Russian President Vladimir Putin assured foreign business representatives at a meeting on the sidelines of SPIEF on Friday that they should not be concerned about the draft law on responsibility for compliance with Western sanctions against Russia since the problem had been resolved, a participant of the meeting told reporters.

"Common issues [were discussed at the meeting]. Basically, it was about sanctions, about the law that was passed and the law which is now being fixed on the part of responsibility… The president told them about it, and [head of the Russian Union of Industrialists and Entrepreneurs Alexander] Shokhin later explained that the problem had been settled," the participant said.

The second thing that worried investors is the use of special interest contracts, he added.

US businessmen behaved in a very correct manner at the meeting with Putin and were interested in industry issues, the source added.

© Sputnik / Maksim Blinov
Russia to Continue Ensuring Economic Growth - Putin
One of the topics discussed at the meeting between Russian President Vladimir Putin and heads of foreign companies on Friday was the measures taken by Russian lawmakers in response to Western sanctions, First Deputy Prime Minister Anton Siluanov said.

"They discussed the development of special investment contracts, the implementation of the law on the consequences of the implementation of Western sanctions in Russia — everything that the business is worried about," Siluanov told reporters on the sidelines of the St. Petersburg International Economic Forum.

Siluanov also clarified that the issue concerns the framework law on Russia's counter-sanctions, which has already been passed by the State Duma, as well as the bill on the responsibility for implementing anti-Russian sanctions on the territory of the Russian Federation, which is being revised prior to the second reading in the lower house of the Russian parliament.

© Sputnik / Alexey Malgavko
Moscow's Counter-Sanctions May Turn Russia Into 'Agricultural Superpower'
Putin said last week the law on responsibility for compliance with Western sanctions in Russia should be balanced and not harmful for Russian companies or their foreign partners. On Monday, the lower house of the Russian parliament adopted the draft law in the first reading, but on Thursday, the lawmakers postponed the second reading of the bill. On Wednesday, the lawmaking council of the State Duma discussed experts' proposals that could be introduced to amend the bill.

SPIEF, held annually in Russia's second largest city of St. Petersburg, is a major global platform for communication between business representatives and the discussion of crucial economic issues. The event started on Thursday and will continue through Saturday.