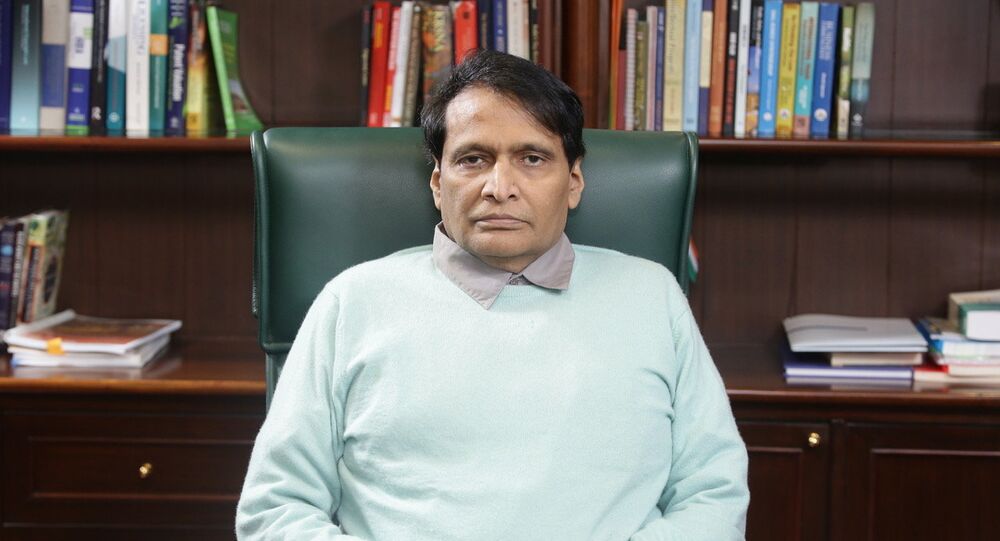 A number of topics affecting the world economy are expected to be addressed at the upcoming 2018 St. Petersburg International Economic Forum. Suresh Prabhu, Minister of Commerce & Industry, will be leading the Indian delegation to SPIEF. He spoke exclusively to Sputnik about India’s strategy to combat bilateral trade barriers amid US protectionism.

Sputnik: With the discourse on protectionism and politics of sanctions in the backdrop, how do you see India's role in the global economy?

© Sputnik / Alexei Maishev
Modi, Putin Agree on Economic Ties Between Indian Think Tank, Russian Ministry
Suresh Prabhu: I have reiterated on many occasions that protectionism is not good for the global economy. Similarly, sanctions directed against a country do not yield the desired results. These unilateral actions hurt most developing countries and LDCs as they undermine the multilateral trading system, especially the WTO that ensures fairness, equity, and justice to all its member countries. In reality, protectionism is a reaction to the deepening inequalities within and across nations. This calls for policy correction on the domestic front rather than shielding oneself from engaging in global trade.

In the long run, protectionism actually harms one's own country because input costs, if not sourced at competitive prices through well established global supply chains, will make that product expensive and, thus, uncompetitive on the global market.

READ MORE: China and Japan Make Breakthrough in Cooperation Amid Trade War With the US

India is the most open economy. Recent initiatives in India such as GST, demonetization, Aadhar, Make in India, Invest India, Digital India, Skill India, etc. are pushing the economic reforms to new levels and preparing the country for 21st-century challenges. Earlier this year, in the month of March, India hosted an informal WTO mini-ministerial meeting in New Delhi, in which trade ministers of countries participated. The forum gave an opportunity to discuss, amongst others, the need to tackle protectionism and revitalize WTO.

Sputnik: Russia has been pushing to cut the share of the US dollar in its trade with India. India is unaccustomed to using the Ruble-Rupee pair. Has India given serious thought in this direction?

© REUTERS / Dmitri Lovetsky/Pool
Sochi Summit to Unveil Next Chapter in Indo-Russian Relations -Indian Trade Body
Suresh Prabhu: There is considerable scope for trade using national currencies especially in areas such as pharmaceuticals, textile, agricultural commodities, and machinery exports from India to Russia and export of fertilizers, machinery, other natural resources and other engineering products from Russia to India.

We are very keen to explore the possibility of various options available for using the accumulated Indian currency to the tune of 12 billion rupees in the Russian government account in the RBI as a part of the interest repayment. We have proposed earlier that a separate expert group should meet and discuss available options. I welcome the response on this from the Russian side.

Sputnik: In what ways will the US sanctions on Russia affect India's trade relations with the country? How does your government plan to cope with this situation?

Suresh Prabhu: Any trade sanctions would have a ripple effect on others' trade with that country. India-Russia bilateral trade is close to $10 billion USD (India's imports are valued at $7 billion USD and exports at $3 billion USD). Besides, there are a large number of ongoing defense contracts which will be directly impacted by sanctions.

We will have to find innovative ways of dealing with the evolving unpleasant situation. One way out could be to explore the possibility of making payments in currencies other than  the dollar, such as the euro, pounds, etc. In addition, the Rupee-Ruble trade, barter trade, jointly execute civilian projects in third countries, etc. could be other options.

Perhaps, we could do a combination of all these options.

Sputnik: The year 2018 marks the 65th anniversary of the first trade agreement between India and Russia. In this context, how do you assess future prospects for bilateral trade and cooperation? What are the major sectors that are likely to witness a boom in bilateral trade engagement?

© AFP 2021 / Mark Schiefelbein / POOL
Russia, India, China Coming Together Against US – Indian Professor
Suresh Prabhu:  The prospect for bilateral trade between India and Russia is quite positive.  In 2017, there was a considerable increase in bilateral trade.  In 2017, it was 10.12 billion USD whereas in 2016 it was 6.597 billion USD showing an increase of 53.66%. In future, exports from Russia may be seen in products like crops, vegetable oils, food preparation products, vegetables, beverages, fertilizers, machinery and equipment, motor vehicles, turbojets, salt, steel products, chemical, rubber, plastic, including polyimides, wood products etc. The exports from India may be seen in products like crops, food processing, tea, miscellaneous edible preparations, pharmaceutical, textiles, clothing, chemicals, electrical equipment, and machinery.

Sputnik: Last year Russia and India succeeded in overcoming a decline in trade that lasted several years. The two countries expect to take it to 30 billion USD per annum by the year 2025. Do you think this is an achievable target?

Suresh Prabhu: Yes, in 2017 we have seen an increase of around 53% in bilateral trade and we are quite optimistic that we would be able to reach the target of 30 billion by 2025, particularly in the context of negotiations of Free Trade Agreement (FTA) with Eurasian Economic Forum in which Russia is the major trading partner.

Sputnik: Your Russian counterpart Maxim Oreshkin recently visited India. At that time, the two sides announced the intention to develop a joint action plan to step up trade, economic and investment cooperation. What could be the main outlines of this plan?

Sputnik: Will the operationalization of the International North South Transport Corridor play a significant role in achieving bilateral trade targets?

Suresh Prabhu: Yes, the operationalization of International North South Transport Corridor (INSTC) shall play a significant role in achieving the bilateral trade target since this route is likely to reduce the time and cost by 30% and 40%, respectively.

Presently the existing route through China and Europe is long, expensive and time-consuming. The existing route from Suez Canal takes 45 to 60 days whereas through INSTC it will take 14 to 20 days.

Sputnik: What are the prospects for Indo-Russia cooperation in the field of innovation?

© AP Photo / Evan Vucci
Trump's Decision Will Scuttle Global Peace, Denuclearization - Indian Analyst
Suresh Prabhu: In January 2016, Prime Minister Narendra Modi launched the "Technology Vision Document 2035" aimed at the development of science and technology and innovation sectors of India. India has a total of 25 innovation centers and ranked as the top innovation destination in Asia and second in the world for new innovation centers.

India accounts for 27% of Asia's new innovation centers. You may like to know that India has moved up to 60th position in the 10th edition of Global Innovation Index (GII) in 2017. Government is providing enhanced funding support for building national innovation ecosystem to harness science and technology in a strategic manner to address the challenges in key sectors. The Ministry of Commerce and Industry of India and Ministry of Economic Development of Russian Federation are planning to sign a MoU on cooperation in the field of innovations during our bilateral Summit, later this year.

The Confederation of Indian Industry (CII) and Skolkovo Foundation will be organizing the India-Russia StartUp Summit later this year. Thus, the year 2018 is promising to become a threshold to the new age of cooperation between our countries.

Sputnik: An Indian delegation will soon be departing from India to participate in the SPIEF 2018. What are your expectations from the forum?

Suresh Prabhu: I am heading the Indian delegation for SPIEF. During the forum, the Indian delegation will be participating in various panel sessions. Minister for Economic Development Mr. Maxim Oreshkin and myself will be co-chairing the Russia-India Business dialogue which will have representations of around 18 companies at the highest level. This year a few representatives from different Indian states will also be joining the official delegation. We plan to sign the Sister City agreement between the State of Assam and Sakhalin. National Small Industries Corporation (NSIC) will also be signing a MoU with Russia Small Business Corp (RSMB). I have also scheduled meetings with the Governors of a few regions and Ministries of the Russian Federation. I look forward to a fruitful outcome of this event.

US Vows to Cancel Sanctions Against Russia's GAZ Group: Deripaska Has to Leave