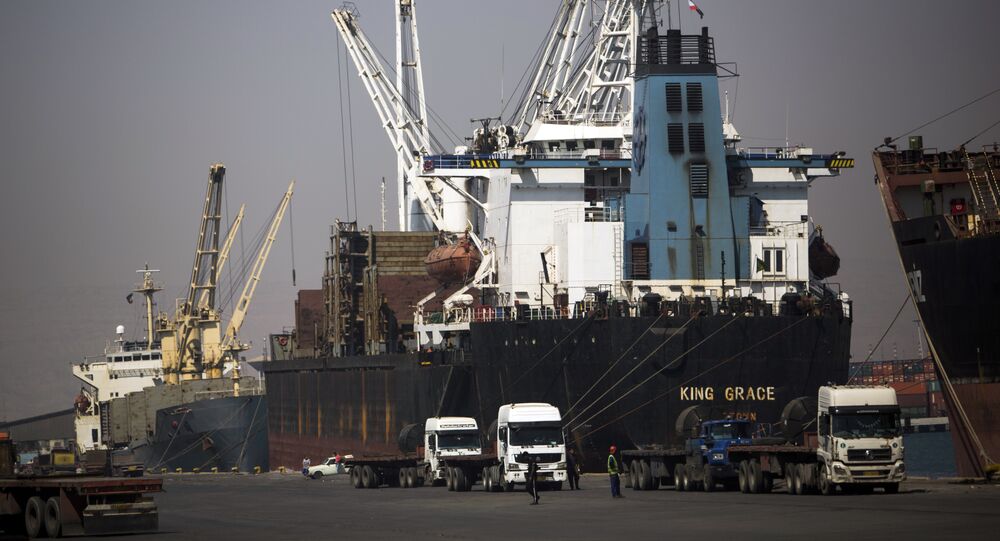 The remaining signatories are trying to save the Iran nuclear deal, as Tehran has given European companies 60 days to guarantee that business ties with Iran will continue following Washington's withdrawal from the agreement.

Some European corporations, including Danish shipping companies Maersk Tankers and Torm, have reportedly scrambled to scrap cooperation with their Iranian counterparts following the US's move to reinstate sanctions against Tehran after Washington's exit from the Iran nuclear deal, also known as the Joint Comprehensive Plan of Action (JCPOA).

"We follow the situation closely and always follow the rules. Therefore, we have also stopped taking new orders in Iran," Torn spokesman was quoted by Reuters as saying.

READ MORE: No Dollars, No Problem: Paris Finds a Way to Dodge US Anti-Iranian Sanctions

Maersk Tankers, in turn, confirmed that the company has already ceased offering its ships for new Iranian cargoes, but that it would adhere to agreements that were clinched before Washington's withdrawal from the JCPOA.

Siemens' chief executive Joe Kaeser, for his part, cited possible retaliatory steps from the US when explaining the company's decision not to do any new business in Iran.

At the same time, Kaeser noted Siemens continues the delivery of its gas turbines to Iran to be used at the Islamic Republic's 600-megawatt power station.

READ MORE: How US Anti-Iranian Sanctions Can Lead to 'Nuclear Race in MidEast'

In this vein, it is unclear whether Siemens will remain committed to a $1.6 dollar memorandum of understanding on Iran's rail infrastructure, which was signed in January 2016.

Airbus Vows to Analyze 'Impact of US Announcement'

Other European companies are keeping mum on their business ties with Iran, which has urged them to give clear-cut guarantees on whether they will deliver on their obligations if Tehran remains a signatory to the JCPOA.

According to Asghar Fakhrieh-Kashan, a senior adviser to Iran's Roads and Urban Development Minister Abbas Akhoundi, Tehran called on Airbus to announce its decision on a hefty deal to supply about 100 passenger planes to Iran.

Airbus, in turn, stated that it was analyzing the situation and "the impact of the [US] announcement" on all its contractual agreements.

"All steps will be consistent with our internal policies and in full compliance with sanctions and export control regulations," the statement added.

Late last week, US National Security Advisor John Bolton said in an interview with CNN that after the withdrawal from the Iran nuclear deal, the US would not exclude sanctions against EU companies cooperating with Tehran.

The US Treasury also signaled its readiness to slap "secondary sanctions" on Iran that are expected to affect both European and global companies.

The remarks came as Europe and France reportedly discussed  the possibility of further exemptions for European companies that could be affected by US economic sanctions on Tehran in order to "defend their economic interests," given that a number of French enterprises, including Total, Renault and Sanofi are operating in Iran.

While Washington has given European companies three to 18 months to leave Iran and cease all relations with the Islamic Republic, Tehran has said that the Europeans have 60 days to guarantee that business ties with Iran will continue.

© AP Photo / Thibault Camus
France Wants to Defend EU Firms From US Sanctions on Iran - French Minister
On May 8, US President Donald Trump announced his decision to withdraw the United States from JCPOA. He also promised to reinstate the sanctions against Iran that were lifted as a result of the agreement.

The European Union and the P5+1 group of countries, including China, Germany, France, Russia, the UK and the US, signed the JCPOA with Iran on June 14, 2015. The agreement stipulates a gradual lifting of anti-Iranian economic sanctions in exchange for Tehran curbing its nuclear program and allowing inspections to ensure that the nature of the program is purely peaceful.