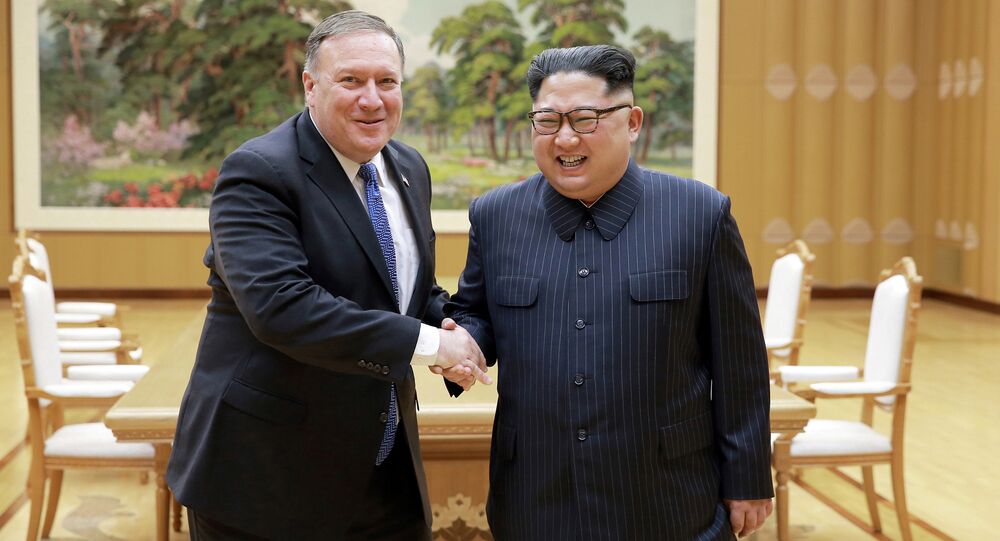 The US would allow American companies to invest in North Korean infrastructure and provide "sanctions relief" if the country dismantles its nuclear arsenal, the secretary of state told Fox News.

"This will be…private sector Americans…coming in to help build out the energy grid that needs enormous amounts of electricity in North Korea," Pompeo claimed in an interview on "Fox News Sunday," adding that the US would also help to bring investments in the agricultural sector in order to solve food issue of North Korea under the condition of the full denuclearization of the country.

He also added that the US would need "to provide security assurances" to North Korea's leader Kim Jong-un in order to reassure his aspiration for peace.

"We will have to provide security assurances to be sure. This has been the trade-off that has been pending for 25 years," Pompeo underlined.

© AP Photo / Airbus Defense & Space/38 North/Pleiades CNES/Spot Image
Seoul Hails Upcoming Closure of North Korean Nuclear Facility
This statement echoes the words of the White House National Security Adviser John Bolton, who claimed on Sunday, that North Korea might receive economic aid from the US, adding, however, that the country had to dismantle its chemical and biological weapons, as well as its nuclear arsenal in order to restore communication with the US. He said that under this condition peaceful coexistence is possible.

"I think what the prospect for North Korea is to become a normal nation, to behave and interact with the rest of the world the way that South Korea does," Bolton told CNN.

The US official noted that North Korean leader Kim Jong Un carries out talks is professional and he is able to handle complex situations, adding that he was "paying attention to things that the world is saying".

"I did get to spend a great deal of time with Chairman Kim. The conversations are professional. He knows – he knows his brief. He knows what the – what he is trying to achieve for the North Korean people. He is able to deal with complexity when the conversation requires it," Pompeo said in his interview with Fox News.

Trump is expected to hold a summit with North Korean leader Kim Jong-un in Singapore on June 12, in order to work out a deal to denuclearize the Korean Peninsula.

This major shift in the relations of the two countries became possible after South Korean President Moon Jae-in and North Korean leader Kim Jong-un held a historic summit on April 30, signing a joint declaration on denuclearization and reunification programs for separated Korean families.