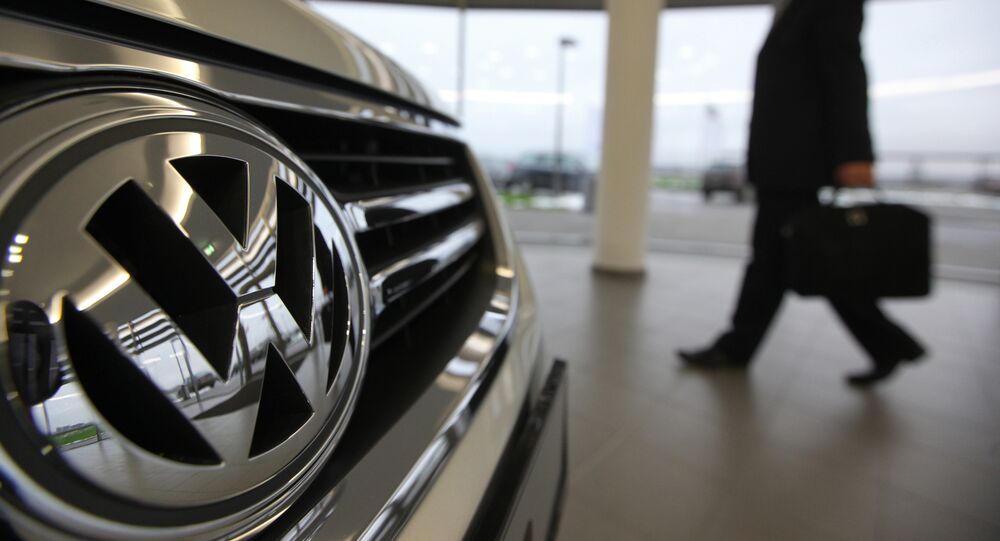 International Companies Evaluating Impact of US Sanctions on Iran

International companies are evaluating the US decision to withdraw from the Joint Comprehensive Plan of Action (JCPOA) and express readiness to comply with them.

On Tuesday, US President Donald Trump announced the United States would no longer remain part of the JCPOA, also known as the Iranian nuclear deal, and promised to re-impose the highest level of economic sanctions against Iran in response to Tehran's alleged development of nuclear program.

The German Volkswagen car manufacturer said that it was closely monitoring the situation and was ready to stick to the new restrictions.

© Sputnik / Mikhail Fomichev
Volkswagen Dismisses Top Executive Schmidt Over Dieselgate Scandal
"Volkswagen began exporting vehicles to Iran last year. We are therefore monitoring and reviewing political and economic developments in the region very closely. As a matter of principle, Volkswagen complies with all applicable national and international laws and export regulations," a company's spokesperson said in a statement obtained by Sputnik.

In July, Volkswagen announced its plans to return to the Iranian market selling two models — Tiguan and Passat — in the Islamic republic.

The French Groupe PSA car manufacturer said that its activities in Iran were compliant with the international regulations and the company awaited the EU official position on the issue.

"As all the economic players, we follow the evolution of this subject, including the official position of the European Union on this issue that we hope singular. The Groupe PSA reminds that its automotive activities are totally compliant with the international regulations," a company's spokesperson said in a written statement sent to Sputnik.

The Groupe PSA signed in June 2016 an agreement with the Iran Khodro car producer on creating a joint venture to produce modern vehicles in the country.

One more German car manufacturer Daimler said it was assessing the possible impact of the US decision to re-impose sanctions on Iran.

"We are closely monitoring the further developments after President Trump‘s announcement on the JCPOA and will then evaluate the potential impact on our business," a spokesperson said in a statement obtained by Sputnik.

Daimler's division Mercedes-Benz Trucks signed in September an agreement with Iran Khodro on creating a joint company that will provide sales and after-sales services in the Islamic Republic.

The UK-Dutch energy giant Royal Dutch Shell also said that the company was analyzing the US move.

"We are currently assessing the impact of yesterday’s executive order," the company's spokesperson said in a statement obtained by Sputnik.

In 2016, The Royal Dutch Shell signed a provisional agreement with Iran on assessing potential investments in three oil and gas fields in the country.

The Germany company of Siemens AG expressed its readiness to abide by the exports control regulations that will be issued after Trump's decision on Iran.

© Sputnik / Alexandr Kryazhev
Siemens and SPbPU Launch Supercomputer for Artificial Intelligence Systems
"We are aware of the announcement. While we are currently assessing the implications to our international business in Iran and the broader region, one thing is clear already: We will always comply with all relevant export control regulations. We look to Governments to set the rules and are waiting for further guidance from the international community," a spokesperson for Siemens AG said in a statement sent to Sputnik.

The company is involved in a number of projects in Iran in the sphere of highly efficient power generation, transmission and distribution; innovative mobility solutions for road and rail networks; digital automation for manufacturing and industry as well as technology for intelligent buildings and urban infrastructure.

The international community is not enthusiastic about the US move. EU foreign policy chief Federica Mogherini as well as leaders of the United Kingdom, Germany and France expressed their concern over the decision and expressed their commitment to the JCPOA.

The Russian reaction was even more negative with the Russian Foreign Ministry saying that there were no grounds for destroying the JCPOA and calling the US move a blatant violation of the international law.

At the same time, Trump's decision was welcomed by Israeli Prime Minister Benjamin Netanyahu, who said that Iran continued to develop nuclear weapons despite the JCPOA.