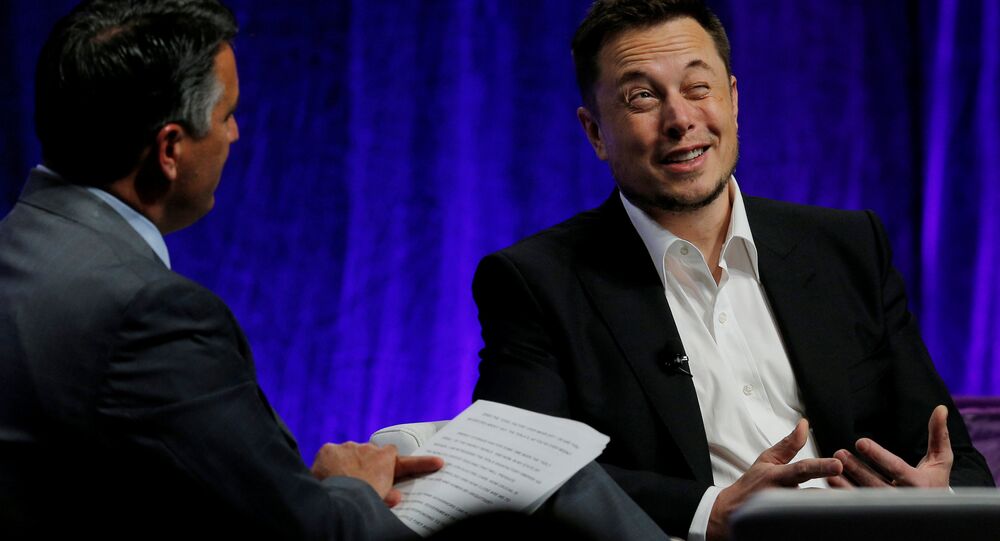 Days after Tesla CEO Elon Musk ignored questions from two analysts during a corporate earnings conference call on Wednesday, the South African tech innovator took to Twitter on Friday and admitted to having made a mistake.

© AP Photo / Ringo H.W. Chiu
"I'll Build My Own Mechagodzilla...:" Elon Musk Says He's Building Cyborg Dragon
Musk's grand apology came after Twitter user David Brady told the 46-year-old that he should've "just blocked them in the queue" rather than shutting down the critical questions they asked of Tesla during a live conference call.

"True. And once they were on the call, I should have answered their questions live," Musk responded. "It was foolish of me to ignore them."

Musk dove further into the discussion by explaining that the reason he opted to dismiss the questions was because the callers were "sell-side analysts who represent short seller thesis, not investors." Sell-side analysts work for brokerage firms and evaluate a company's future earnings growth.

​Continuing to offer his side of the story, Musk explained why he called the questions from Bernstein analyst Toni Sacconaghi and RBC Capital Markets analyst Joseph Spak "boring" and "dry."

​According to Market Watch, during the Wednesday call, Sacconaghi attempted to ask about Tesla's capital expenditure before getting cut off with a loud "next" from Musk. By the time Spak had the floor and inquired about the number of reservations for Tesla's Model 3 car, Musk shut it down by saying he simply didn't want to answer "dry" questions.

"We're going to YouTube. Sorry. These questions are so dry. They're killing me," he said on the call.

After offering his explanation on Twitter, Musk changed topics and tweeted instead that the next batch of the Boring Company's "Not a Flamethrower" flamethrower would be arriving just in time for the "short burn of the century." Critics have suggested that Musk's comment hints that the company's stock will be skyrocketing soon.

​Speaking to CNBC about the incident on Thursday, Sacconaghi suggested that Musk's behavior was a "worrisome sign."

"This is a financial analyst call, this is not a TED talk," the analyst said, adding that Musk's behavior was concerning because it shows he's not interested in the financial side of his "visionary" projects.

"I think, generally speaking, when CEOs are evasive around number questions, that is worrisome… when financial questions are asked, they should be addressed," he added.

CNBC reported that Musk's decision to ignore the questions pushed Tesla's stock down by 5.6 percent Thursday.