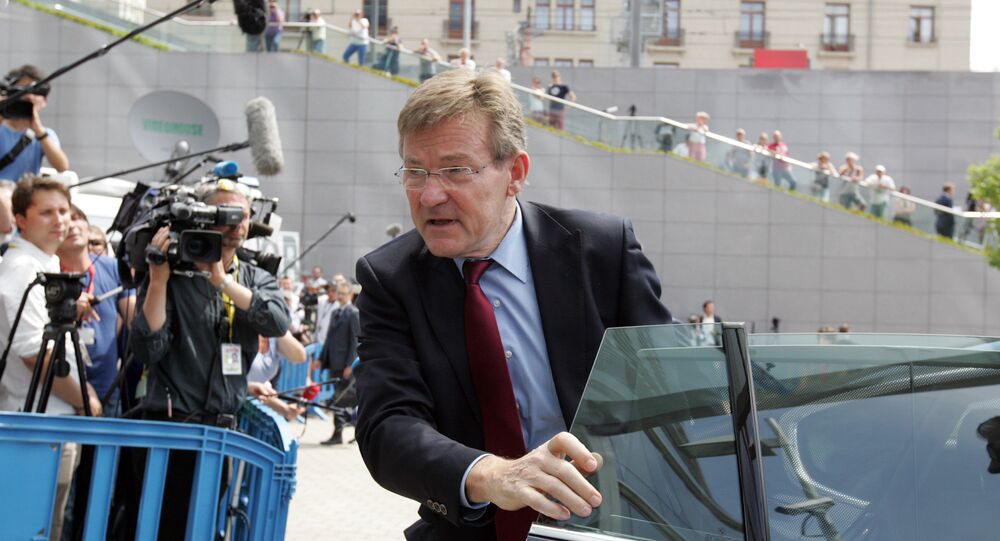 Grab the Popcorn: Trump Promises to ‘Take On’ EU in New Trade War

As the US president struggles at home with a legislature and judiciary increasingly unwilling to do his bidding, new bluster and threats of a trade war with other nations appear to have become Trump’s rallying cry to the faithful.

© AP Photo / Carlos Barria
Iran Deal: Trump 'Acts on Orders From Israeli Lobby in Washington' - Analyst
US President Donald Trump, at a meeting of his followers in Michigan on Saturday, suggested that his administration would do everything within its power to shift what the White House terms Washington DC's trade imbalance with the European Union, and hinted darkly that Americans must prepare for a bumpy and uncomfortable ride, according to RT.

In asserting that the EU was primarily formed to divert financial gains from the US, Trump promised that what he termed "disastrous trade deals" would stop, as he was going to personally "take on" the economic European powerhouse, as well as China, the largest economy in Asia and the second largest economy in the world.

At a carefully curated supporters-only promotional speaking event in Michigan, the strikingly unpopular US leader claimed that EU trade policies existed only "to take advantage of the United States," cited by RT.

The US president warned of tough economic times for residents of the wealthiest country on earth, declaring that, "In short term you may have to take some problems, long term — you're going to be so happy."

The former reality television producer and hotel magnate did not elaborate on the kind of problems Americans could expect to face.

In keeping with an ongoing talking point repeatedly used by the president, Trump blamed previous US administrations for the issues he describes as problems.

"I don't blame them," the US president declared — referring to those nations with which he seeks to engage in trade wars — adding, "I blame past presidents and past leaders of our country."

A May 1 deadline has been implemented for the March 1 Trump ultimatum to various nations — including China and the EU — to either curb aluminum and steel exports to the US or face sharply-increased import taxes.

The ultimatum triggered a speedy global backlash alongside threats of retaliation from China, the EU, and most other nations.

At a meeting of EU members in Sofia on Saturday, Belgian Finance Minister Johan Van Overtveldt noted that Trump's strong-arm tactics will backfire, adding that trade wars are a no-win scenario over the long term.

"A trade war is a losing game for everybody," Van Overtveldt observed.

Zero Sum Game: The US Rolls Out ‘Trade War’ Ultimatum for Europe