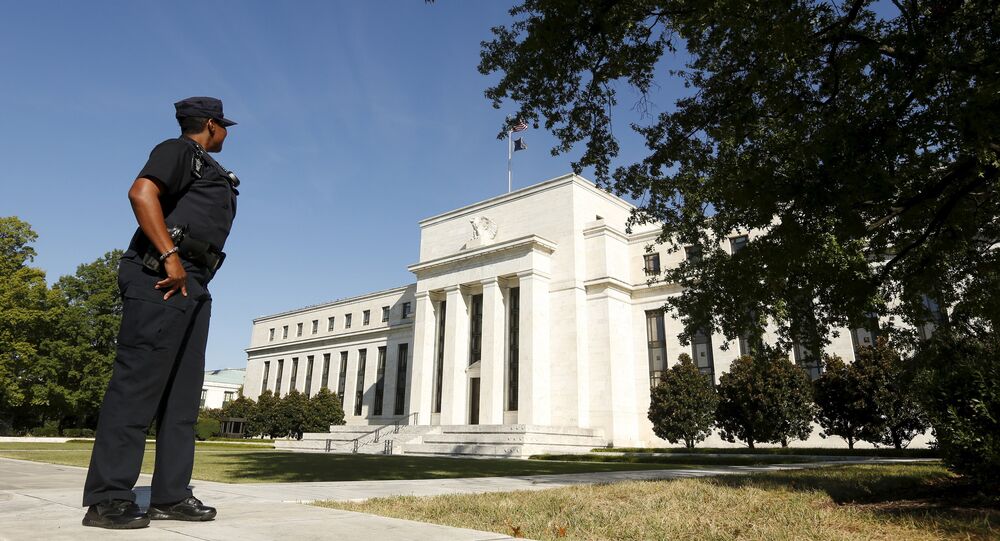 New Fed Chair Jerome Powell is expected to continue the current pace of policy adjustment by raising rates four times this year in 0.25 percent increments, but some market participants suggest the US central banking authority could speed up its pace of policy normalization.

Kristian Rouz — The Federal Reserve is set to undertake its first major policy move under its new Chairman, Jerome Powell, on Wednesday. The US central banking authority is widely expected to raise its base borrowing costs due to labor market strength and solid growth estimates for this quarter.

Powell became the new chairman of the Board of Governors of the US Federal Reserve System last month, succeeding Obama appointee Janet Yellen. While Powell pledged to continue the course of gradual, data-driven rate hikes, some market participants are concerned the new Fed Chair might take a more hawkish stance on policy than currently projected.

"Trying to guide the market to more hikes at the March meeting seems a little premature, given the fundamental perspective in growth and inflation," Subadra Rajappa of Societe Generale said.

According to the current Federal Open Market Committee's (FOMC) outlook, US base borrowing costs are projected to increase to 3-3.25 percent by 2020 from the current range of 1.25-1.5 percent. This suggests the central banking system could increase interest rates four times this year and at least three times in 2019.

Higher Fed borrowing costs would drive up the cost of credit products across a wide spectrum of industries, rendering consumer and business financing, as well as the re-financing of existing loans more expensive. At the same time, higher interest rates signal a normalization in monetary policies, making the broader economy more sustainable.
Additionally, higher base borrowing costs stave off the imbalances between various sectors of the economy by containing the discrepancies between the rapid increases in stock and real estate asset valuations, and tepid growth in manufacturing and agriculture.

Powell's Fed is also inclined to speed up its rate hikes in the light of the Trump administration's fiscal stimulus measures. The President's tax cuts, coupled with the expected omnibus infrastructure package, are expected to pour some $2.5-3 trln into the Main Street economy, making financing more accessible despite the higher debt servicing costs.

© Flickr / Scott Beale
US Stocks Plunge as Interest Rate Fears Grip Markets
Looser fiscal policies typically require a more hawkish response on the monetary side in order to avoid overheating the economy to the point where a ‘boom-bust' scenario becomes inevitable.
However, some fixed-income industry experts say Powell might take his time at the upcoming March FOMC meeting, waiting for the macro data for the outgoing quarter to arrive and bring more clarity regarding the overall economic situation.

"If I was sitting on the Fed board, I would certainly be saying let's wait a while before we get overly hawkish," Tom di Galoma of Seaport Global Holdings said. "The (Fed's) rhetoric might be a little more dovish than what was expected two to four weeks ago."

However, the majority of experts are expecting four rate increases this year.

They say fiscal stimulus measures will likely suppress jobless rate further — currently at 4.1 percent — pushing consumer spending higher. This, in turn, will heat up inflation, which might rapidly overshoot the Fed's 2-percent target. In this case, the central bank will have to pick up the pace and, more importantly, scope, of policy tightening.
This means the FOMC could raise rates by 0.5 percent at a time rather than by 0.25 percent — its standard practice since the beginning of the current tightening cycle back in December 2015.

"I'm not sure whether the tax cuts were necessary," David Leduc of BNY Mellon Asset Management said. "But people forget this expansion has been so anemic and unsatisfying."

Overall, experts say the US economy is on a robust course of expansion without significant signs of overheating, meaning Powell won't have to alter the existing policy framework significantly.

READ MORE: San Francisco's Williams Being Eyed for No. 2 Spot at Federal Reserve by Trump

The expected four interest rate hikes this year would lift base US borrowing costs to 2.25-2.50 percent, and the bond market is pricing in this figure already, with the 2-year Treasury yield standing at 2.295 percent — its highest since mid-2008. This means investors are selling near-term bonds, expecting higher returns on investment elsewhere.

Additionally, the expectations of a stronger dollar and heightened political risks, as well as possible disruptions in international trade, are all rendering investors increasingly focused on domestic US assets outside of stocks and bonds.

This creates a favorable environment for overall US GDP expansion gaining momentum in the near-to-medium-term.