President of the Dallas Federal Reserve Bank Robert Kaplan says US monetary policy is set to maintain its current trajectory, characterized by gradual rate increases, this year, given current macroeconomic fundamentals and the effects of the Trump administration’s fiscal stimulus measures.

Kristian Rouz – Dallas FRB President Robert Kaplan says the current policy of gradual rates hikes will continue throughout this year, pointing to the projected acceleration in inflation as justification for three increases in borrowing costs by the year-end.

His words come as US jobless claims have dropped to just above their 45-year-low, and the solid manufacturing and consumer sectors suggest that inflation is set to gain momentum. Fed officials expect an increase in the prominence of so-called ‘upside risks’ to the economy, which include the expensive stock and real estate markets. Rate hikes are poised to help contain these risks.

The US 10yr yield is currently at 2.86%. For the moment, a March 21st rate hike is still on. Ironically, if no hike, the market would be even more spooked than last week, especially the financials that are pricing in 3-4 hikes. Alarm bells if no March hike. pic.twitter.com/uisNt8wW5W

"The Fed is now seen to be more hawkish on inflation expectations, especially after the higher-than-expected January wage growth and CPI inflation recently," analysts from United Overseas Bank Ltd. in Singapore wrote.

As macroeconomic fundamentals are becoming stronger in the face of the Trump administration’s fiscal stimulus and accelerated business activity, the ongoing normalization of monetary policy is appropriate, according to FRB officials.

"It is wise then to take back some of this accommodation, some of this stimulus," Kaplan said. He added that the GOP tax cuts and President Trump’s expected infrastructure package could be "too much of a good thing" for the already-buoyant economy, exacerbating the "upside risks."

Additionally, while Kaplan stressed that three interest rate hikes would be the most appropriate scenario, stronger-than-expected macro data could change this outlook. If inflation, consumer sentiment, or manufacturing output overshoot the current expectations, there could be four rate increases this year.

"Where I settle out right now is, I think three probably is appropriate," Kaplan said. "If I saw a greater overshoot of full employment, if I saw even greater evidence than I expect of rising inflation, those would affect my view."

The Dallas Federal Reserve Board President also addressed the recent spikes in volatility in the financial markets – particularly, in stocks. He said he is looking for clues if the stricter bank underwriting standards and higher commercial interest rates have helped curb market volatility, but so far he hasn’t seen any.

As inflation followed by rate hike, US bonds still selling together with Fed Bond selling. TLT… the support line will be very scary if broken. pic.twitter.com/AmhGGq50mJ

That said, the Fed might react to market swings, should they continue, by implementing rate hikes as well.

US Federal Reserve officials are also looking at the effects of President Trump’s fiscal measures on the bond market, where the recent fiscal developments could push neutral interest rates higher, prompting the Fed to raise its rates appropriately. 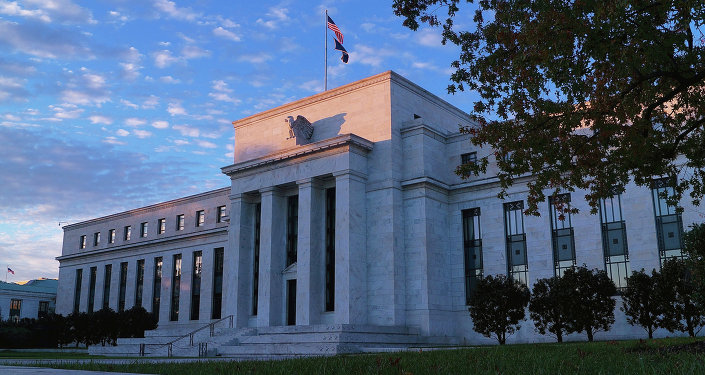 © Flickr / Tyler Merbler
US Federal Reserve to Decrease Balance Sheet, Eyes 3 Rate Hikes This Year
As the US government increases its borrowing, the Fed will have to tighten monetary conditions at a relevant pace in order to avoid the discrepancies between neutral, base, and commercial interest rates.

Kaplan also pointed out that the simulative effects of tax cuts on the economy will start to fade as soon as next year. Meanwhile, the positive effects of the infrastructure package – if implemented – could last a bit longer.

This as the US economy is at the end of its 10-year business cycle, meaning the labor market situation and inflation are still the primary factors to watch out for when making longer-term GDP and policy projections.