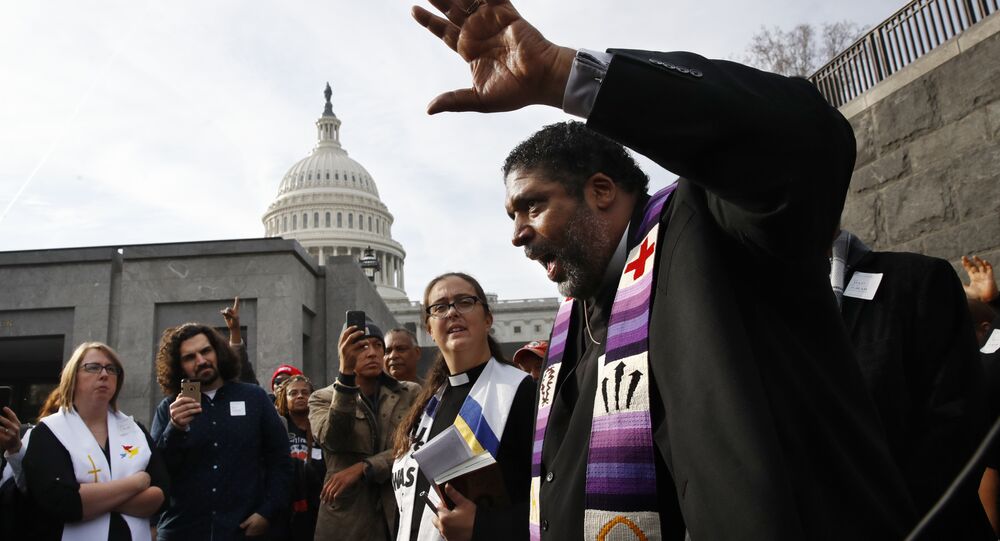 A campaign in the United States to address economic inequality beyond racial barriers has called for a Monday strike by low-wage earners working in restaurants.

Dubbed the ‘Poor People's Campaign' — from the mid-1960s movement created by American human rights icon Reverend Dr. Martin Luther King — organizers will stage rallies across the US to renew attention to an issue that many Americans already live with daily, the plight of the nation's poor across lines of race.

In calling for the hundreds of thousands of cooks, dishwashers, waitstaff and cashiers who work at popular chain restaurants in America to walk off their jobs on Monday, organizers are seeking to remind US citizens that the root cause of poverty is not race, but endemic economic inequality.

In a country that now sees over 40 percent of its wealth controlled by just 1 percent of the population according to the Washington Post, many of those in power continue to drive a false narrative suggesting to a poor white majority of Americans that social benefits for people of color are why poor whites have no healthcare and are suffering, according to Abc15.com.

Bolstered by a recent Democratic upset in a North Carolina governor's election, Poor People's Campaign spokesman Reverend William Barber is helping to detail for Americans what has previously been a confusing and divisive issue: economic inequality in the US is not about race, it's about changing laws that support the accumulation of wealth into the hands of the very few.

Echoing the mid-20th century explanation described by Reverend Dr. Martin Luther King, Barber is actively working to assist Americans to see through what is referred to as ‘the Trick.'

The Trick, as described by King and echoed by Barber, is the promotion by white, predominantly male, politicians and others in positions of influence — including the press — of a false idea that the source of the problems facing poor, white, working-class Americans is people of color, immigrants and other scapegoats, according to Abcnews.com.

"The majority of people in this country who are poor are white people," detailed Barber, who explained that to get Americans to understand how their opinions are being manipulated "you have to show them the Trick."

"‘You're upset that you don't have healthcare,'" Barber added, "‘Guess what, black and Latino people aren't your problems. It's the people who are voting against health care.'"

Referring to the new poor people's movement as a civil rights campaign is incorrect, according to Barber, however.

"That language is too puny — it's designed to divide," he noted.

"We didn't build a white movement or a black movement [in North Carolina]," the group's spokesman explained, referring to the election upset over a deeply conservative Republican governor in the state, "We built a moral movement."

Labor unions, including one of the nation's largest, have caught on to the idea, and support the walkout.

Service Employees International Union (SEIU) head Mary Kay Henry asserted that the union is committed to the new Poor People's Campaign, adding that it will mobilize voters for the next presidential election in 2020.

Henry, in acknowledging how the Trick works, suggested that unions help to inoculate white workers from the racist appeals of white politicians because they foster relationships between people across racial lines.

"White working people, when they are in relationship in union organizations, understand that we all have to join together to lift things up," she observed.

Organizers of the Monday walkout also intend to begin six weeks of ‘direct action and nonviolent civil disobedience' on May 13, Mother's Day, according to the Poor People's Campaign and the Fight for $15 organizations.