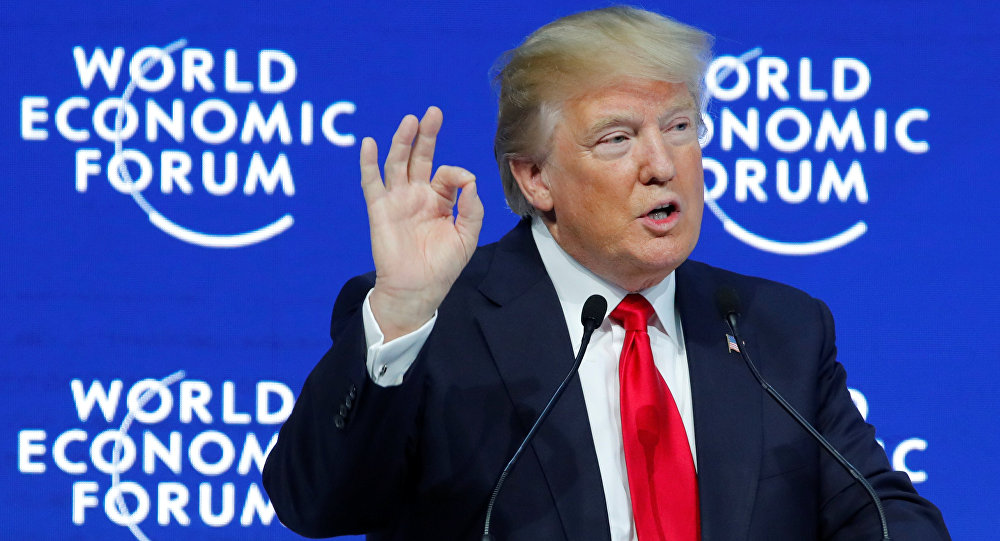 The US President has addressed the participants of the 2018 World Economic Forum, explaining how America's friendship and partnership will promote to build a better world.

US President Donald Trump said in a speech at the World Economic Forum in Davos that he aimed to represent the interest of the American people and affirm US partnerships to create a better world.

US President Donald Trump said he would always put Americans first and the leaders of other countries should put their countries first as well.

"As President of the United States, I will always put America First. Just like the leaders of other countries should put their countries first," Trump during his speech.

However, the president reassured the audience that his "America first" strategy doesn't mean "America alone."

"When the United States grows, so does the world," Trump said, adding that "American prosperity has created countless jobs around the globe and the drive for excellence, creativity and innovation in the United States has led to important discoveries that help people everywhere live more prosperous and healthier lives."

Trump noted that an unemployment rate in the US, especially among afro-Americans was the lowest in recent 50 years, thus making the country once again open for business and competition.

"There has never been a better time to hire, to build, to invest and to grow in the United States. America is open for business and we are competitive once again," Trump said.

The US president also touched upon the immigration issue, calling for securing borders, stricter immigration policies and enhanced national sovereignty, saying that each nation should put its own economic interests ahead of the larger multi-national partnerships. 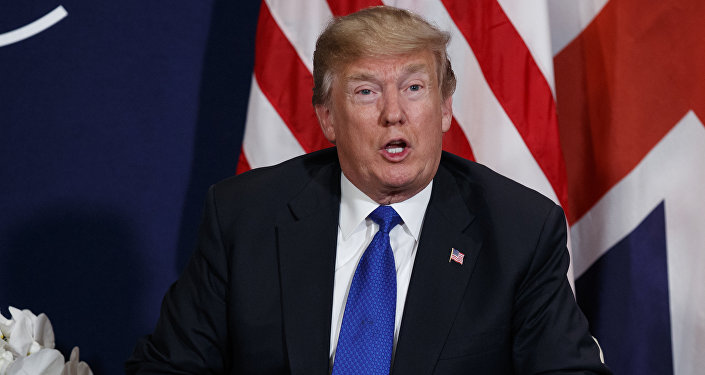 © AP Photo / Evan Vucci
Trump Calls Reports on Ordering Mueller's Firing 'Fake News'
"We support free trade but it needs to be fair and it needs to be reciprocal," Trump said, adding he was willing to negotiate trade deals individually or as a group with the countries that remain in a trans-Pacific trade deal, which the US left a year ago.

Trump continued by saying that the US would restore integrity to the global trading system by enforcing current trade law. According to the US leader, the world can't have free, open trade if some countries exploit system at the expense of others.

"We cannot have free and open trade if some countries exploit the system at the expense of others," Trump said.

During the speech, Donald Trump noted that he wanted all nations to unite in maximum pressure campaign to denuclearize North Korea.

"My administration is proud to have lead historic efforts at the United Nations Security Council and all around the world to unite all civilized nations in our campaign of maximum pressure to denuke the Korean Peninsula," Trump said.

© AP Photo / Cliff Owen
Trump Seeks to Repair Ties With African Leaders, While Some Boycott His Speech
Trump added that the US would do whatever was necessary to protect Americans from terrorism, adding that nearly 100 percent of territories formerly controlled by Daesh in Iraq and Syria had been liberated.

On Media and Fake News

According to Donald Trump, media used to depict him positively, when he was a businessman. However, everything changed since Trump became a politician as he realized how nasty and fake the press can be.

"As a businessman, I was always treated really well by the press… it wasn't until I became a politician that I realised how nasty, how mean, how vicious and how fake the press can be," Trump said.

The comment by the US leader was met with boos from the part of media representatives in the audience.

The WEF Annual Meeting in Davos, Switzerland, started on Tuesday and is set to last through Friday, with over 340 political leaders, including some 70 heads of state and government, expected to attend the event. The event takes place on an annual basis and is aimed at shaping global and industry agenda by the political, business, and academic leaders.