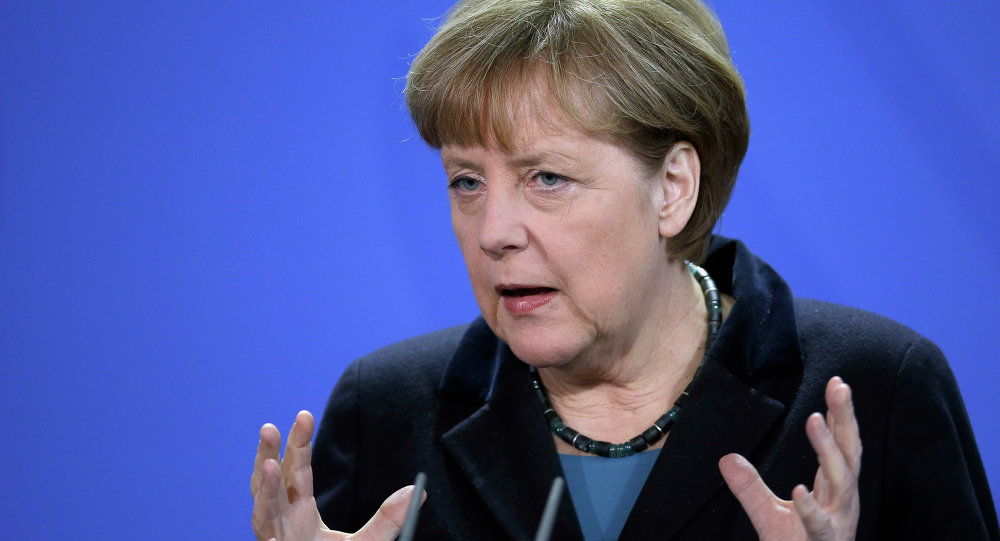 German Chancellor Angela Merkel has sent a special address to the 2018 World Economic Forum in Davos.

Speaking at the World Economic Forum in Davos, German Chancellor Angela Merkel reminded the delegates that 2018 marks the 100th anniversary of the end of the First World war, the conflict in which its participants engaged into without fully understanding the implications of their actions. Therefore, nowadays politicians have to respond to modern challenges taking into consideration the lessons of history. In her speech the chancellor touched upon such burning issues of modern politics as a worldwide surge of nationalism and strive for isolationism, populist sentiments and Brexit.

© AFP 2019 / Armin Weigel / dpa
Merkel's Government Increased Arms Exports to Countries Beyond EU, NATO
As right-wing parties are on the rise in Germany and across Europe, Merkel addressed the issue of populism in her speech noting that for the first time in decades Germany's population is polarised in the wake of the economic crisis in the eurozone as well as the migration crisis, problems which made people amenable to populist promises. She called right-wing populism in Europe a "poison" which the government tries to bring under control.

However, according to the chancellor, in spite of the global nature of economic and social problems in Europe isolationism and protectionism cannot be a proper solution. She stressed that only multilateral approach to global problems will take the world forward, adding that there is too much "national egoism" at the moment.

Merkel also assured that despite the difficulties in the process of government formation, Germany will continue to contribute to the solution of problems world is facing nowadays.

© AP Photo / Geert Vanden Wijngaert
Taking a Stand Against Trump: Merkel Likely to Join Macron at Davos
Turning to the UK's withdrawal from the European Union, Merkel expressed regret over Britain's decision. However, the chancellor pointed out that the UK move has shown Europe that it has "to move forwards." She added that Macron's rise to the French presidency also offered a new impetus for European reforms.

Speaking about future of the EU-UK relations, the chansellor said that she open-minded about what kind of partnership the Bloc and London would develop after Brexit, but added that there could not be compromise on the EU's core principles.

The World Economic Forum is set to be held on January 23-26, and some 70 heads of state as well as 340 ministers are expected to attend the event.