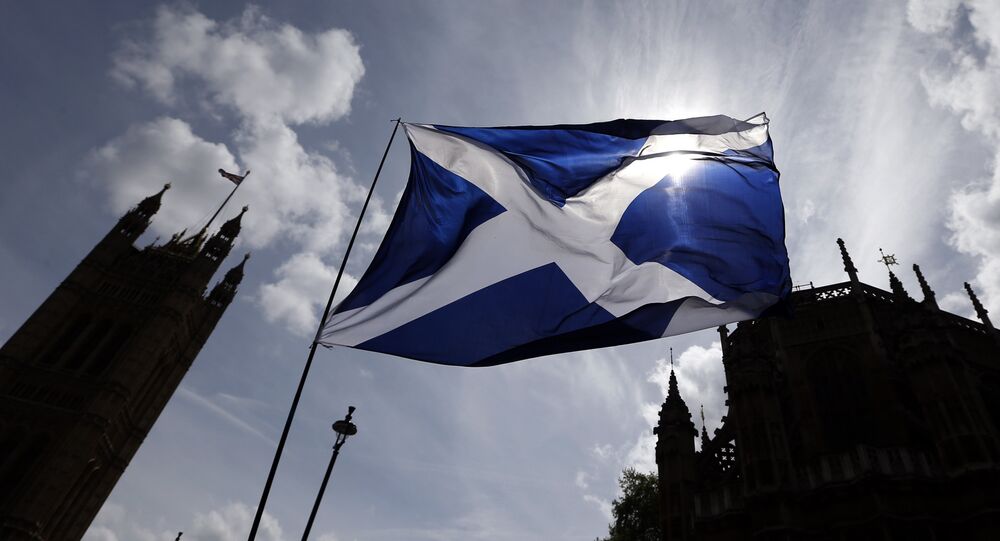 UK Prime Minister Theresa May has blasted the Scottish National Party and the SNP government, as economic data suggests a significant economic deterioration north of the border since the SNP took power in 2007.

Kristian Rouz – The UK’s economy has defied most of the downward pressures and risks associated with the tumultuous Brexit process, but the Scottish economy continues to consistently fall behind, expanding at half the rate of the rest of Britain.

PM May was attacked in Parliament by SNP MP Ian Blackford over the perceived negative impacts of Brexit to Scotland’s economy. The SNP tend to blame the Tory cabinet in London and its policies for most of the economic tumult north of the border – despite the Scottish economy being heavily subsidized by the UK government.

“The Honorable Gentleman asked me for economic analysis. Well I’ll give him some economic analysis,” PM May said. We saw the figures this morning for GDP growth in Scotland. In the third quarter GDP in Scotland grew by 0.2 percent in the rest of the United Kingdom, it grew by 0.4 percent.”

PM May also pointed out over the past year, the Scottish economy grew by only 0.6 percent compared to the UK’s solid 1.7-percent growth rate.

“My economic analysis – 1.7 percent is higher than 0.6 percent, you’re better off with a Conservative government than an SNP one,” PM May said.

The Tory minority fraction in the Scottish parliament welcomed PM May’s criticism of the SNP.

“This is Nicola Sturgeon's (Scottish First Minister) mess but her only answer is to blame Brexit and raise taxes. Sturgeon’s policy of making Scotland the highest-taxed part of the UK will only make matters worse,” Dean Lockhart, Scotland’s Shadow Finance Minister.

© AP Photo / Jane Barlow
'The Harder the Worse': Scotland's First Minister Warns of Brexit Implications
Given the demographic changes in Scotland in 2017, its economy grew by zero percent.  While the SNP blames Brexit for the dismal performance of the Scottish economy, PM May disagrees. She said Scotland would be much better off under a Tory cabinet in Edinburgh.

Since the Brexit vote in June 2016, the Conservative and Unionist cabinet in London has taken solid action to minimize the risks of both higher market volatility and lower business and investor confidence, whilst also stimulating  expansion in manufacturing, lending, services sector, and exports.

Prime Minister May urged the SNP to re-think its policies, blasting its plans to hike income taxes for medium- and high-income earners – a sentiment shared among economists.

“As expected growth remains fragile and below trend. Prior to the financial crisis, average yearly growth had typically been greater than 2 percent,” Graeme Roy, director of the Fraser of Allander Institute, said.

READ MORE: Nicola Sturgeon: Scotland Should Have the Right to Choose Its Future (VIDEO)

PM May’s party supports her viewpoint. The Tories emphasizes that since the SNP took power in Scotland and became  de-facto the only political force north of the border back in 2007, the Scottish economy started to underperform and lag behind the rest of the UK. Tories say the “growth gap” between Scotland and the rest of the country  has cost the nation up to £16.5 billion.

Scottish business leaders are concerned the SNP might hike taxes in its 2018/19 budget, currently under consideration in Holyrood. The private sector argues additional tax increases will further impair  economic growth.

“In particular, with family finances facing the likelihood of higher council tax bills, it’s important consumers don’t face a further hit to their wallet or purse through further hikes in income tax rates over and above those already planned,” David Lonsdale, director of the Scottish Retail Consortium, said.

© AP Photo / Tim Ireland
Up to 1 Mln EU Migrants Could Settle in UK After Brexit, Report Warns
Scottish manufacturing fell by 2.5 percent over the past two years, compared to a 4-percent growth across the UK. Scotland’s construction has decreased by a whopping 12 percent over the same period, whilst retail and wholesale rose by 0.7 percent.

Previously, Scottish First Minister Nicola Sturgeon had said the economic statistics would prove the UK is better off as part of the EU. However, the numbers appear to have proven otherwise.

Additionally, the dismal Scottish GDP statistics are now poised to affect Edinburgh policymaking, as the current projections for  next fiscal year’s budget are being deemed increasingly unsustainable due to the faltering growth. Economists say Holyrood might want to consider elements of fiscal stimulus, with either higher spending, or lower taxes.