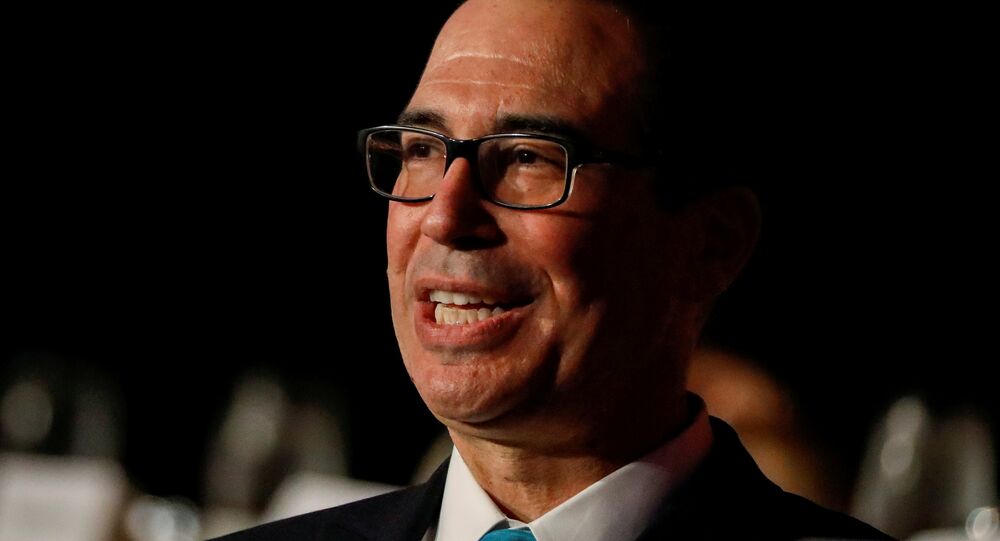 Treasury Secretary Steven Mnuchin is confident the GOP tax reform law will pay for itself due to the projected expansion in tax base, quicker economic growth, and improved investment climate.

Kristian Rouz – US Treasury Secretary says he expects a massive increase in tax revenues after Congress passed and President Trump signed the GOP tax reform last month. In accordance with the Laffer curve, Secretary Mnuchin expects an expansion in the taxable base due to both an accelerated pace of hiring, and a projected rise in taxable corporate profits.

This will make the presumably costly tax reform pay for itself, the Treasury Secretary said.

Secretary Mnuchin made his comments at an event hosted by the Economic Club of Washington in DC on Friday. He said the expansion in tax base will produce an additional $1 trln in revenues, while the costs of the tax reform are expected at $1.1 — $1.5 trln over the next 10 years.

This makes the GOP tax plan revenue neutral, easing the concerns of the fiscally-conservative Republican lawmakers, such as Sen. Bob Corker. The Treasury Department will also ask Congress for additional funding to ensure implementation of the reform – but a quicker expected economic growth might produce an additional boost to budget revenues.

Secretary Mnuchin said his colleagues’ economic model assumed US GDP growth will average at 2.9 percent in the near-to-medium term to produce the additional $1 trln in revenues. If economic growth overshoots this projection, budget revenues will be higher – and President Trump is confident his administration can spur the US economy to a 4-5 percent annualised expansion.

The Secretary, however, was more modest in his observations, only saying “we do think we can get to three percent or higher.”
Secretary Mnuchin also urged Congress to pass the budget by 19 January in order to avoid either a government shutdown or passing another provisional budget – as both these scenarios would hamper GDP expansion in the near term by scaring off investors.

The Treasury Secretary also addressed other heatedly-debated topics, including cryptocurrencies – which became a media sensation last year. He said the Treasury has established a working group to observe digital assets such as Bitcoin and Monero, subject to the Financial Stability Oversight Council.

READ MORE: From 'the American People': US Treasury Secretary Mnuchin Gets Package of Manure

Secretary Mnuchin expressed the concern of many investors of cryptocurrencies’ possible damaging effects to conventional markets. This comes after the Chicago Board Options Exchange (CBOE) and CME Group started to trade bitcoin futures.

These are the securities which could be used as conventional financial instruments. For example, these bitcoin futures can be deposited in a bank – something that digital currencies cannot.

Fluctuations in cryptocurrency value in recent weeks have put into question the sustainability of bitcoin futures. Secretary Mnuchin addressed the issue, saying his Department will prevent terrorists and criminals from using digital assets “to do bad things”, whereas everybody else could use bitcoin for any purpose at their own risk.

“The Fed and we don’t think there’s any need for that at this point,” the Secretary said when asked whether the government and the Federal Reserve would use bitcoin themselves.

Secretary Mnuchin previously reiterated that American workers will get an increase to their pay check by mid-February due to the tax reform. He also urged high-tax states to review their fiscal policies in order to stave off potential negative effects to state taxpayers, and adopt President Trump’s fiscal agenda.