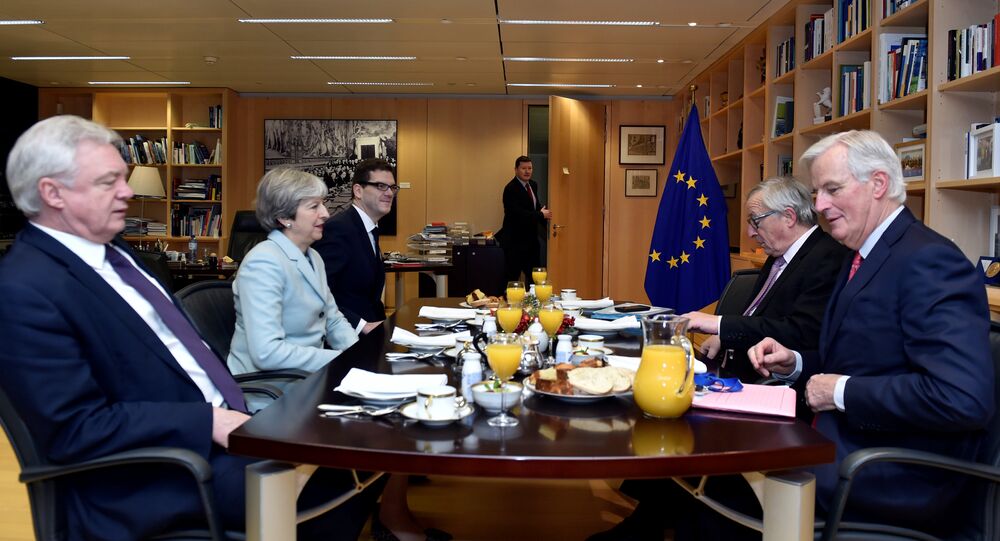 Last week, Theresa May arrived in Brussels to meet with European Commission President Jean-Claude Juncker and Commission's chief Brexit negotiator Michel Barnier for a final round of negotiations within the first phase of Brexit talks.

MOSCOW (Sputnik) — The United Kingdom may lose 10,500 jobs on the first day of Brexit due to their relocation from the country, while the Irish capital of Dublin and the German city of Frankfurt may benefit as financial centers from London's withdrawal from the bloc, the Ernst and Young (EY) accountancy firm said Monday.

In 2016, a total of 12 financial services firms estimated that 12,500 jobs would move out of the United Kingdom as a consequence of Brexit, EY noted.

Last week, London and Brussels announced the long-anticipated breakthrough in Brexit talks, paving the way for the negotiators to move to the second phase of talks, dedicated to the future trade relations.

Omar Ali, EY’s UK financial services leader, said that the announcement was a "relief" to the businesses across London.

"It signaled an intention to agree a transitional period as early as possible next year and the starting point for negotiations on future trade deals, both of which are fundamental to avoid adding any additional risks to the system and for the future strength of the UK financial services industry," Ali pointed out.

Last month, the Bank of England warned that around 10,000 jobs could leave London after the UK departure from the bloc.

The bank has also addressed UK companies, demanding them to submit contingency plans for various Brexit options, including withdrawal without an agreement with the European Union, the so-called hard Brexit.

During the last week's talks within the final round of the first phase of Brexit, Theresa May, European Commission President Jean-Claude Juncker and Commission's chief Brexit negotiator Michel Barnier had to agree on the basic terms of Brexit, including the question of borders, Britain's financial payments to its European partners and the rights of EU citizens in Britain after Brexit.