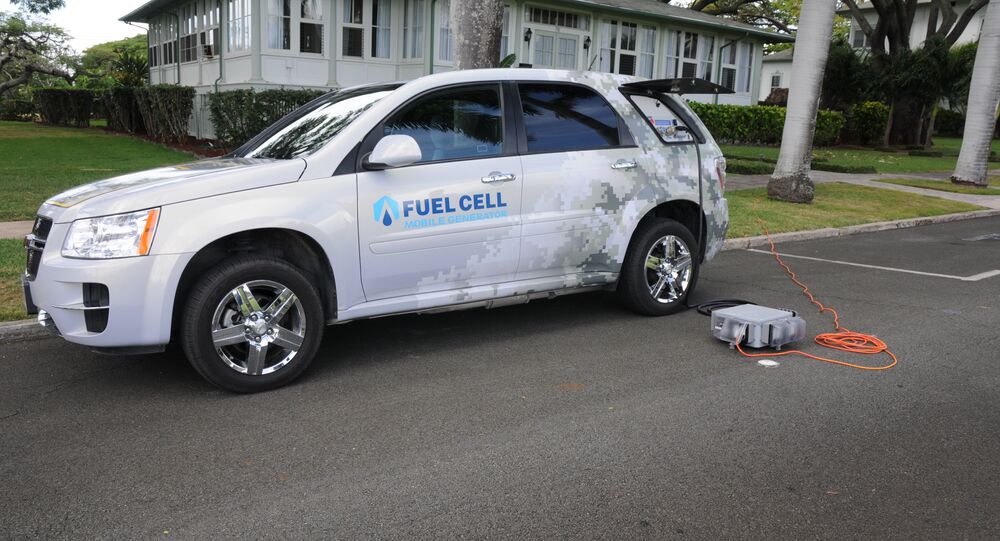 Special guest on a panel at the Energy Summit in London, Toyota Europe's General Manager, Business Strategy Dr. Stephan Herbst believes that by 2030 the total market will be 10-15 million hydrogen cars on the road globally.

He pointed out Hyundai, Audi and BMW were also investing in hydrogen fuel cell technology.

Hydrogen-powered vehicles are also meant to create 30 million jobs, generate US$2.5 trillion of sales and reduce annual carbon dioxide emissions by six gigatons by the year 2050, according to a report from consultants McKinsey, which was commissioned by the Hydrogen Council and came out earlier this month.

© RIA Novosti . Chris Summers
Dr Stephan Herbst (pictured above, and second from the right) at an energy summit in London on Wednesday

However, one of the biggest drawbacks with hydrogen vehicles is their cost.

The Toyota Mirai, which has a hydrogen fuel cell, currently costs US$57,500 compared with a hybrid Prius which is just US$23,475 and an electric Nissan Leaf which is US$30,680.

"We need to make the fuel cells more compact and we need to replace some materials like platinum, which will help to bring down the cost significantly," Dr. Herbst admitted to Sputnik.

Japanese car companies are divided about whether to go down the hydrogen or electric route. Nissan have opted for electric vehicles while Toyota and Hyundai are choosing hydrogen and Honda recently introduced its own hydrogen fuel cell model, the Clarity.

Hydrogen Fuel Cars Are Getting One Step Closer To Reality https://t.co/hRg9gGn1M8 pic.twitter.com/8ppCcXkYTT

Both hydrogen and electric cars produce zero emissions but critics of electric cars say that in a country like China, where most of the electricity is produced by burning coal, an electric vehicle is basically a "coal-burning car", which is not doing anything to tackle climate change or air pollution.

"We are in touch with a lot of mayors of cities. They want their cities to become a lot cleaner. It may not be just because of cars but there is a perception that cars are a major driver. If you go to China when you walk you feel it, you breathe it," said Mr. Lorber, chief operations officer at StoreDot, while sitting on the Energy Summit panel.

StoreDot is an Israeli company developing a new type of lithium battery which would fully charge an electric vehicle within 10 minutes.

Dr. Herbst has made a distinction between applications for the electric and hydrogen-fuel vehicles.

"We believe at the moment that pure electric vehicles are suitable for city mobility, for more short-term drives. The most flexible options are hybrids because you can drive short-term or long-distance. Hydrogen fuel cells we see mainly for long-distance applications and for trucks and buses."

Toyota believes that hydrogen vehicles could prove to be successful outside of Japan, where there is a niche market and 100 hydrogen fueling stations around the country.

If anyone tries to tell you that the UK is asleep at the wheel when it comes to auto innovation, be sure to tell them it's because the car is self driving.

"We will adjust our strategy according to the market. Now we see a strong push in China towards electric vehicles, which is why we are introducing EVs into the market but in Japan it's clearly (hydrogen) fuel cells that is dominating," Dr. Herbst told Sputnik.

Toyota currently produces 1.5 million hybrid vehicles — 40 percent of their sales — and in August, Toyota and Mazda agreed a US$1.6 billion joint venture to produce electric vehicles in the United States.

​The Indian Space Research Organisation recently produced its own hydrogen vehicle and Tata Motors has produced a hydrogen-power bus.

But the ISRO's former chief, G. Madhavan Nair, admitted they were not currently cost-efficient and more research needed to be done on the fuel cell technology.

Last year a company in Wales produced a prototype hydrogen car, the Rasa, which did 0-60 miles per hour in 10 seconds.