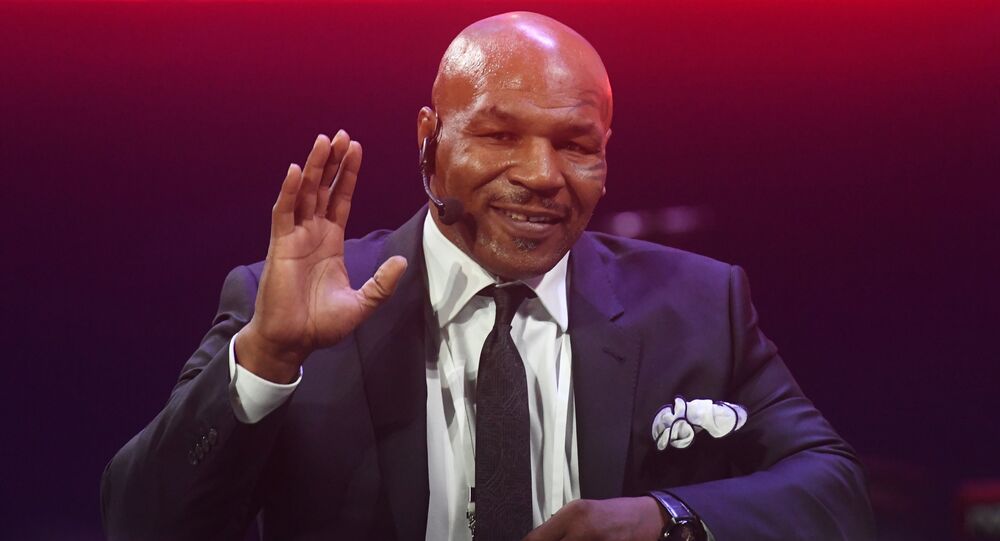 Speaking at the Synergy Global Forum in Moscow on Tuesday, former heavyweight boxing champion Mike Tyson shared his origin story, gave his impressions of Russia and Russians, and offered some advice on how to become the best at whatever it is you do.

Tyson, the former undisputed world heavyweight champ with 50 wins (44 by knockout) under his belt, remains one of most famous boxers in history. The boxer claimed the World Boxing Council title in 1986 at the age of 20, becoming the youngest heavyweight champion in history.

Speaking to guests at Synergy Global Forum, a major business forum held in the Russian capital November 27-28, Tyson admitted that his childhood was not an easy one.

"I grew up in the poorest section of America, in New York. I really had a hard life. I had a mother that was an alcoholic, I had a father that was a pimp; so I really didn't have a regular upbringing. Eventually I got in trouble with the law, and then I met this gentleman named Cus D'Amato, and he was the one that taught me how to box, and then my life changed," Tyson said.

© AP Photo / Nick Potts/PA
Evander Holyfield Takes Shot at Klitschko Brothers for 'Hugging, Not Fighting'
The future boxing legend clarified that he met D'Amato when he was 13 years old. Tyson's mother died when he was 16, and D'Amato became his legal guardian.

Tyson wasn't always a fighter. "I used to get bullied a lot," the ex-boxer recalled. "I had pigeons as pets. In one incident, some bigger boys went up to my pigeon coup and stole my pigeons; one guy killed my pigeon and threw the blood on me, and that was the first time I ever got into a fight."

Addressing the theme of the business forum – the pursuit of one's dream, and what he dreamed about before becoming a boxer, Tyson admitted that for as far back as he could remember, all he wanted to do "was be the champion of the world. I never had a dream before that." It was at the age of 15 that Tyson realized there was something special about him that would allow him to go places in the boxing world.

Speaking about D'Amato, and what it was in him as a trainer that allowed him to achieve such results in his boxing career, Tyson admitted that it was a matter of discipline.

© REUTERS / Andrew Couldridge
Will the World Ever Get an Undisputed Heavyweight Boxing Champion Again?
According to Tyson, the main advice he could offer forumgoers, both from his experiences in the ring and about life in general, is not to get too upset, not to feel sorry for yourself and to try and try again. Discipline, he said, is the main component of success. Having a mentor, a person who believes in you, encourages you and directs you also helps tremendously, he added.

Speaking to reporters in a press conference for the event, Tyson expressed his affinity for Russia and Russians.

"I decided to come here because I like Moscow…[The forum] seems pretty interesting; I saw my friend Oliver Stone here, so I figured this is a pretty good place," he said.

© Sputnik / Grigoriy Sisoev
Oliver Stone Holds Press Conference in Moscow (VIDEO)
Sticking with the forum's business subject matter, Tyson quipped that Russians are "great businessmen. It's proved by looking at Red Square and everything around here; it's beautiful!", he said, making a waving gesture. Russians are "cool" he added, but also "very intense" in the psychological sense.

The boxer noted that he would be glad to come to Russia again if he were invited.