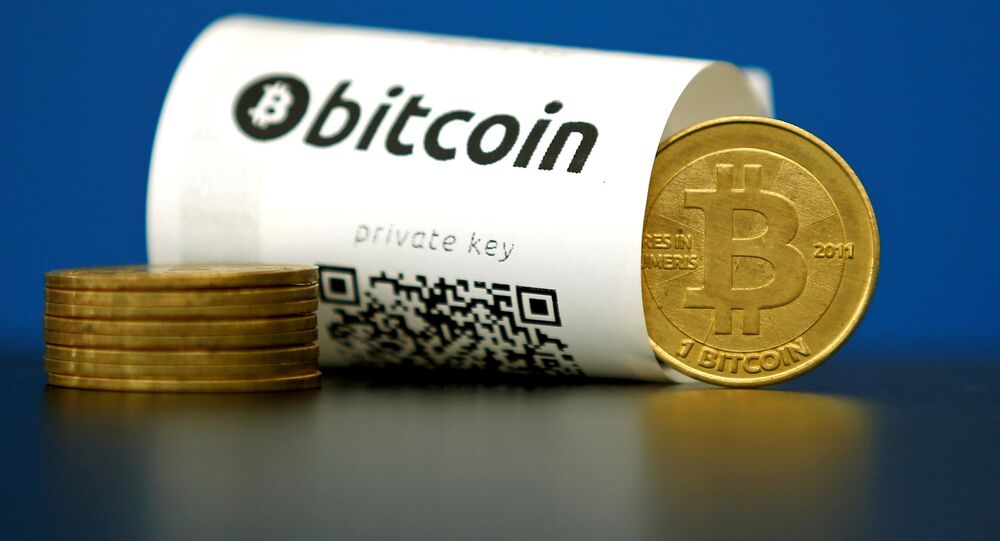 The world’s biggest cryptocurrency topped $9,000 in early trading Sunday and is expected to hit $10,000 within weeks – unless the bubble pops sooner.

Kristian Rouz – Cryptocurrency traders say the recent rise in the value of Bitcoin is driven by increasing demand from investors who previously were skeptical of blockchain technology as a financial tool. Now, however, as volatility in global stocks remains rife despite the massive equity gains in the US, Bitcoin is gradually becoming a legitimate safe-haven asset – on par with gold and US Treasuries.

In less than 24 hours, Bitcoin surged from $8,300 to $9,040 as of Sunday morning, with many traders eyeing a new psychological threshold of $10,000. Whether the most popular cryptocurrency will surpass this mark remains to be seen, but traders have observed a surge in demand for Bitcoin from stock, fixed-income and real estate investors.

Bitcoin’s market cap has now exceeded $150 billion, making it more expensive than several prominent multinational corporations or even the annual budgets of some countries.

The biggest Bitcoin exchange in the US, Coinbase, added about 100,000 new accounts during the Thanksgiving holiday, to a total of 13.1 million accounts as of Friday evening.

Indeed, the massive increase in consumer spending in the e-commerce segment of US retail did not match the tepid sales in the brick-and-mortar segment, meaning some of the e-commerce transactions might have had a connection with Bitcoin or Bitcoin mining. This as Thanksgiving sales were dominated by the sale of electronics.

© CC BY 2.0 / BTC Keychain / Bitcoin
Blockchain Specialist: 'Bitcoin Gold' Aims to Break the Dominance of Large Companies
According to data from CoinTelegraph, Coinbase now has more accounts than brokerage company Charles Schwab, reflecting the strengthening approval of the cryptocurrency amongst wider audiences of investors and traders.

The increase in Bitcoin’s value also comes as the world’s largest exchange, the CME, is poised to open in the second week of December.
This might suggest the world’s most popular cryptocurrency is in for a massive rally ahead of Christmas.

"Anecdotally, everyone I have talked to in the cryptocurrency community has said that Thanksgiving table discussion was all about Bitcoin, and that inspired many family members to buy Bitcoin," Kelly said. "I suspect that pattern was repeated across tables everywhere."

However, buying Bitcoin might not necessarily be the most prudent strategy, as further gains in the value of the cryptocurrency are questionable. Further Bitcoin moves are heavily dependent on regulation in mainland China, where, should the authorities opt to tighten their grip on Bitcoin, major bourses would not be able to operate.

READ MORE: Bitcoin Could Be Temporary Bubble, But People Aren't Betting on That — Analyst

This would most certainly impair the cryptocurrency’s value, and it’s reputation as being independent of governmental regulation and oversight.
Besides, simple market factors could also contribute to Bitcoin’s demise.

© Sputnik / Vladimir Astapkovich
Bitcoin is a 'Fraud' That 'Won't End Well', JPMorgan CEO Claims
This means Bitcoin mining is still quite an appealing industry, despite its huge energy consumption. Yet bitcoin traders and investors should be cautious.

Bitcoin is traded mostly in the Japanese yen, representing 59 percent of all transactions, trailed by the US dollar at 24 percent and the South Korean won comes in third, at 10 percent, according to CryptoCompare.

The market capitalization of all existing cryptocurrencies is twice the volume of the Bitcoin market and stands at $300 billion.
Some say Bitcoin might surpass the $10,000 threshold within a week. However, there’s little certainty, as Bitcoin’s year-to-date gains stand at some 900 percent, and the rally might be wearing out, as new ways of mining have emerged over the past several months.

Analyst: Bitcoin Could Be Temporary Bubble, But People Aren't Betting on That