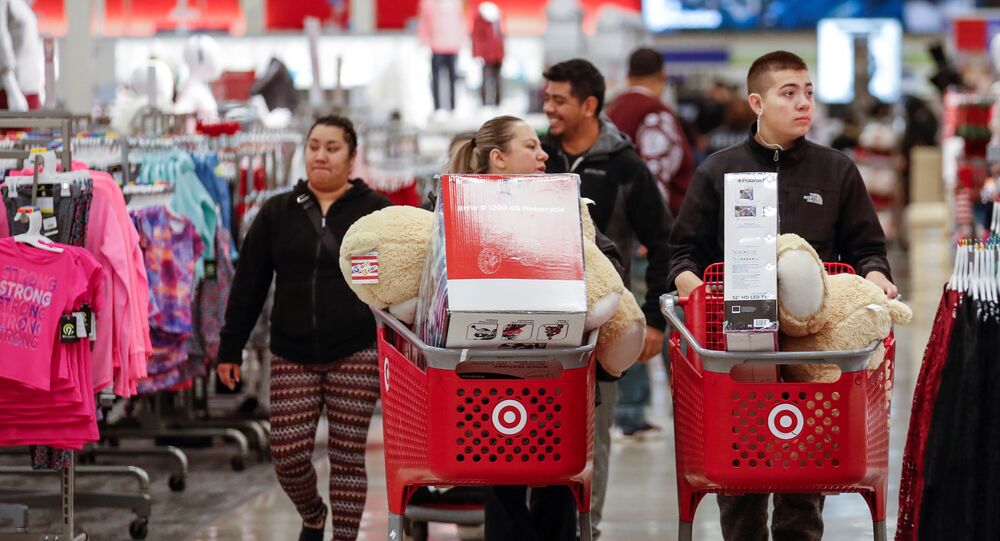 Debt-driven expansion in US retail continues, with e-commerce being the main beneficiary of the Thanksgiving weekend shopping frenzy, while the performance of brick-and-mortar retailers remains lackluster.

Kristian Rouz – Thanksgiving holiday sales in the US hit their highest  record, led by a solid demand for electronics and an accelerated expansion of consumer credit. The ongoing rise of e-commerce contributed to the robust retail sales as well and this weekend’s surge in consumer confidence stirs up optimism for the overall performance of the retail sector in the upcoming Christmas season.

According to a report from Adobe Analytics, US retailers posted total earnings of $7.9 billion in online sales alone on Thanksgiving and Black Friday, an increase of 17.9 percent compared to a year ago.

This as US household debt hit a record $13 trillion in the third quarter, and continued its expansion, according to the Federal Reserve Bank of New York. Auto loan and credit card debt are the most at-risk categories, as the share of delinquencies in both segments has surpassed the 4-percent mark.

Nonetheless, investors are still optimistic, and expect a further expansion in consumer demand as the year draws to a close. The shopping season traditionally culminates just ahead of Christmas, ad retailers are hoping to rake in additional revenues.

The Thanksgiving shopping hysteria supported the stocks of the largest US retailers, including Amazon, Kohl’s, and Macy’s – despite the latter two  struggling amidst the decline of  brick-and-mortar retail and high leverage.

According to Adobe, the upcoming Cyber Monday will bring an additional $6.6 billion in online sales revenue, and it is poised to become the biggest shopping day on record.

On the other hand, brick-and-mortar sales data for the Thanksgiving weekend is not yet available. Observers point out shopper activity in malls was somewhat subdued, as shopping centers featured half-empty parking lots, and shoppers were often spotted leaving retail locations empty-handed.

“The turnout this (Friday) morning has been relatively slow but it is still the best we have seen in three years,” Burt Flickinger of Strategic Resources Group said. “We expect it to pick up as the day progresses.”

However, it did not.

According to a separate report from marketing company Criteo, this Thanksgiving’s shopping spree was predominantly driven by online purchases of mobile phones, with many retailers offering good deals on some in-demand models. This year, 40 percent of online shopping accounted for mobile phone purchases, up from 29 percent last year.

© Photo : Youtube/Sputnik
Spit Spot! When Black Friday Has Finally Come
TVs, personal computers, gaming consoles (the PS4 and Xbox One, in particular), as well as toys were all in high demand due to significant discounts, and/or gift card bonuses.

Analysts report many brick-and-mortar shops served as window displays this weekend. Despite some shoppers making it out to the mall, most of them were noted to be window-shopping, allegedly reserving their money for on-line purchases.

This is debatable; however, as purchasing power of a US consumer has been declining steadily over the past few years due to the increase in personal indebtedness and stagnant wages.

“Customers today want to go to a store – the sights, the smells, the sounds,” Jeff Gennette, CO at Macy’s said. “How you can create that in a department store is a unique opportunity that we have.”

According to retail research company ShopperTrak, brick-and-mortar retail foot traffic fell by 1 percent on Black Friday. This is a preliminary estimate, and sales figures are poised to bring more clarity into the matter.

Meanwhile, National Retail Federation said some 164 million consumers have participated in the holiday weekend shopping, either online or in-store. The report also notes consumers paradoxically are more inclined to spend more ahead of after the Thanksgiving holiday, as consumer trust in promotions and discounts was badly shaken amidst the allegations prices could be mark-up ahead of a massive sale.