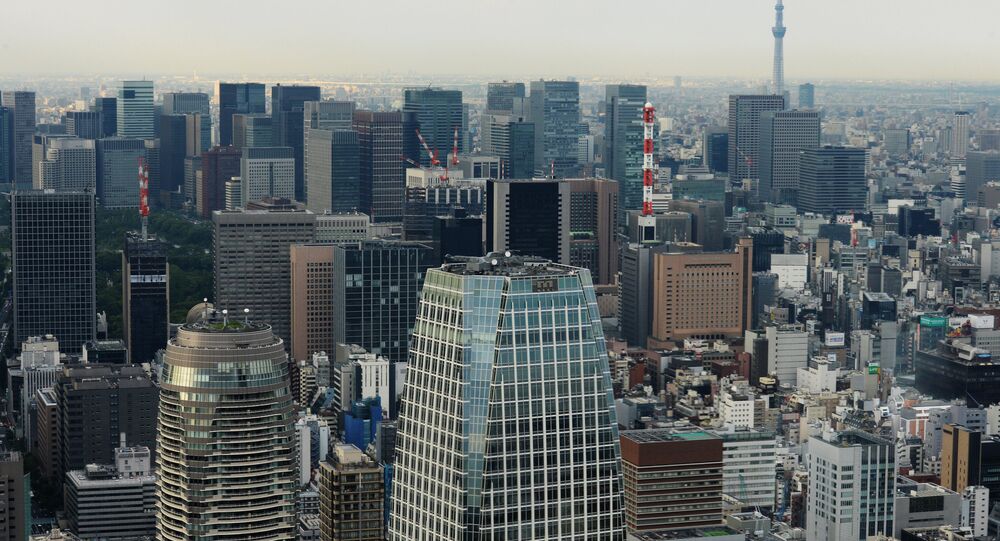 Bank of Japan (BOJ) Governor Haruhiko Kuroda is poised to be re-appointed as the central bank’s chief after his current term expires in April, as PM Shinzo Abe – after winning the election in a landslide – plans a very cautious economic policy rebalancing, and seeks to avoid personnel risks.

Kristian Rouz – Bank of Japan (BOJ) Governor Haruhiko Kuroda is reportedly poised to win a second five-year term after his current tenure with the regulator expires in April 2018. His reappointment would signal another extended period of the ultra-loose monetary policy but recently re-elected Prime Minister Shinzo Abe might have a different plan for Japan’s economy.

© AP Photo / Craig Ruttle
What New Game is Japan Plotting Against China?
The Nikkei newspaper says PM Abe, who enjoyed a convincing victory in last week’s general election, has started considering candidates for the top central bank role. Stocks rallied after Abe’s victory, meaning the markets are betting on the cabinet’s ability to deliver economic stimulus on the fiscal side.

However, with the debt-to-GDP ratio at over 400 percent, the Japanese government can hardly afford a costly accommodation for the economic activity, meaning the BOJ monetary easing would still remain a very important instrument of supporting the sluggish growth.

Whilst Kuroda is the 'leading candidate,' according to Nikkei, the cabinet is seeking someone who has ‘an appreciation for the current system.’

This means PM Abe is unlikely to implement an across-the-board fiscal stimulus anytime soon without raising taxes, which would impair the export-reliant Japanese economy’s growth potential.

In September alone, Japanese exports rose a stunning 18 percent year-on-year, which means it is crucial for Japan to have a weaker currency – the yen – and work towards discouraging investors from allocating capital in the yen-denominated assets as safe havens. A weaker currency helps national exports by making them more competitive overseas.

Loose monetary policy is also important for Japan as the nation hopes to take advantage of the global pivot to normaliяation in monetary policies, from the US to the UK to the EU.

PM Abe, however, has been struggling to implement his tax reform for several years. The government is planning to increase its consumption tax (VAT) from 8 percent to 10 percent by 2019. This would boost budget revenues, and fiscal policy adjustment could allow the BOJ to slightly trim its monetary accommodation by possibly abandoning the negative interest-rate regime (NIRP).

"There's been no major fiscal policy changes over the past years," Atul Lele of Deltec International Group says. "But now there's more certainty that the consumption tax will go through."

Japan’s economy has been underperforming due to the weak inflation, stagnant wages, and excessive reliance on exports. With global economic growth expected at 2.7 percent this year, Japan’s economy 2.5 percent year-on-year in Q2, which is below expectations of 4-percent growth.

BOJ’s monetary policy combines negative interest rates and zero base borrowing costs, with deposit rates at —0.1 percent since 2016, whilst the regulator is also buying $790 billion in bonds in the domestic market per year in order to contain bond yield gains, as well as market volatility.

© AP Photo / Wong Maye-E
US, South Korea, Japan Military Drills a ‘Message to the North Koreans’
Japanese stocks have been outperforming the national economy’s growth, having risen 14 percent year-to-date. It is poised to add an extra 10 percent over the next 12 months. Japan’s stock market has risen 141 percent over the past five years, not least due to the ultra-accommodative BOJ policies.

This means Japan is essentially in an asset bubble situation, meaning any minor adjustment in its monetary policies could send shockwaves across the financial sector, which would immediately be passed on to manufacturing and other export-reliant industries. Let alone drastic changes to the monetary course.

© AP Photo / Shizuo Kambayashi
Abe Takes Advantage of 'Fractured, Weak' Opposition in Japan by Calling Snap Election
In this light, Kuroda is well-positioned to stay in the office for another five years, however, unless the non-financial sector of the economy gains momentum, the stock asset bubble will become an increasingly acute concern.

On the other hand, Japan’s stock market is currently one of the cheapest in the world because of the nation’s exposure to the increasingly unpredictable foreign trade. Japan’s equities are roughly 13 times the corporate earnings, which is below its historical average of 15 times.

Ahead of the election, investors pulled some $4.4 bln out of Japan-equity funds. They subsequently reinvested more than that after PM Abe was triumphantly re-elected, but investor behaviour gives a clue of the state of affairs in the Japanese economy.

Meanwhile, Japan’s Chief Cabinet Secretary Yoshihide Suga said the government’s re-appointment of Kuroda as BOJ governor ‘will not be a problem’, as PM Abe appears to be satisfied with their cooperation and interaction on broader monetary policy.