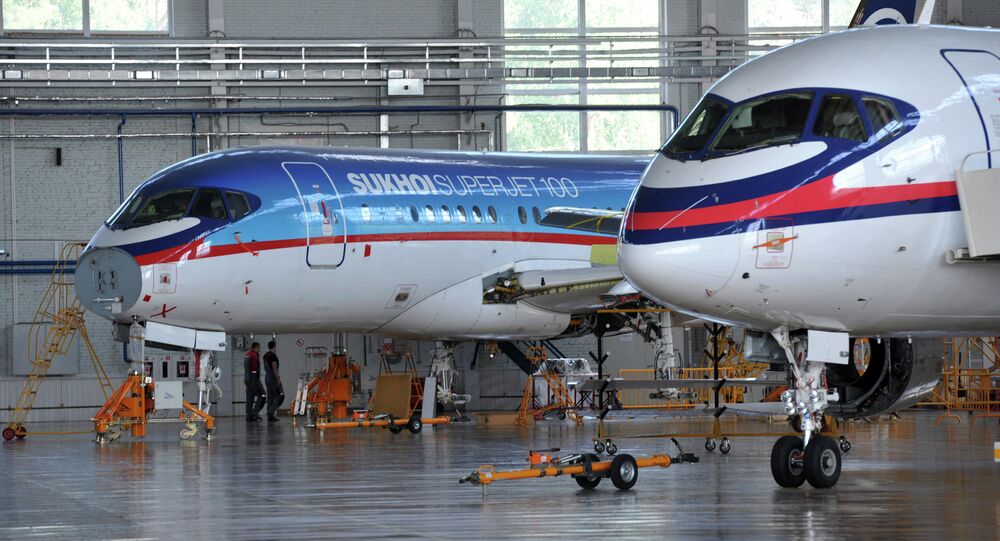 The second largest operator of Russia's SSJ100 airliners has expressed hope for a joint venture with the plane's manufacturer after signing a document on further development cooperation between the two companies.

SAN LUIS POTOSI (Mexico) (Sputnik) — Mexican Interjet, which is the second largest operator of Russia's SSJ100 passenger planes after Aeroflot, is seeking to establish a joint venture with the Russian Sukhoi Civil Aircraft Company to produce spare parts for the aircraft, the company’s Management Board President Miguel Aleman Velasco told Sputnik on Sunday.

"It is about establishment of an enterprise, a company to manufacture spare parts, which can be produced in Mexico or in another country jointly with Russians. There is one enterprise in Miami and Mexico is a partner there," Aleman Velasco said after his meeting with Russian Industry and Trade Minister Denis Manturov.

© Sputnik / Mikhail Voskresenskiy
Russia’s United Aircraft Corporation to Produce 38 SSJ100 Planes in 2017
During the meeting, a document was signed on further development of cooperation between Interjet and Sukhoi Civil Aircraft Company. The agreement was signed within the framework of participation of the Russian business delegation in a business forum in Mexican San Luis Potosi.

Interjet currently runs a fleet of 22 SSJ100 planes, which have been performing flights since 2013. In March 2016, it placed an order for additional ten aircraft, bringing their number up to 30.

Velasco also said the company is interested in purchasing Russian MS-21 airplanes. "We are very interested in the MS-21, because the components from which it is built make it lighter, it needs less fuel. Its engines are US-produced, but we hope that Russia will have its own engine, a lighter one," he said.

The MS-21 is a Russian twin-engine jet airliner with an expected capacity of 150-211 passengers, set to be introduced in 2019 with Russian Aeroflot airlines. No specific date has been set for the deal yet, but Interjet hopes to start purchasing the MS-21 in 2018, Velasco added.