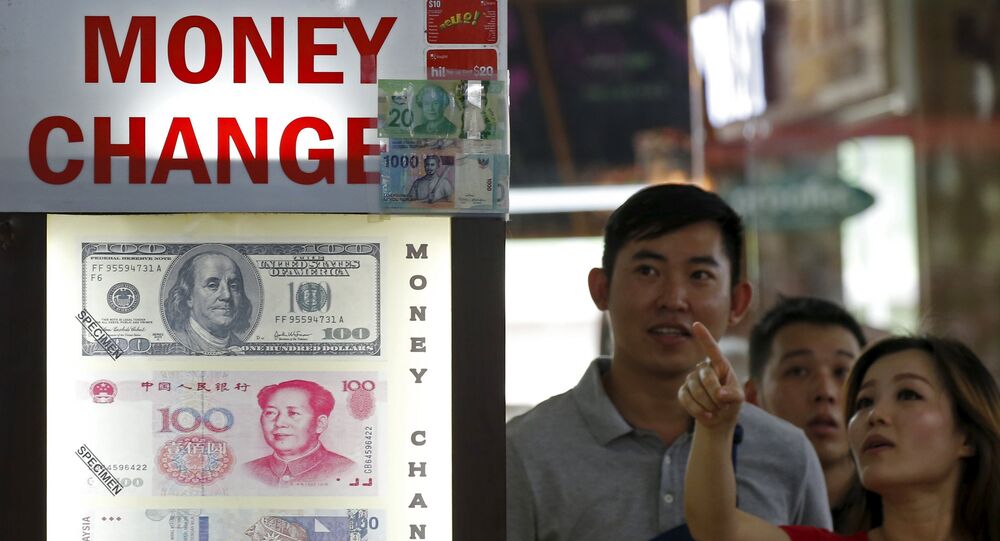 Yuan's Growing International Status 'Not Under Threat' From Dip in Transactions

According to SWIFT, the Chinese yuan has experienced a slight fall in international payments, despite Beijing's stated intention to internationalize the currency; Alexander Larin, senior analyst at the Russian Academy of Sciences' Institute of Far East Studies, told Sputnik that this is a just a short-term trend.

The Chinese yuan's share of global payments has decreased for two straight months, according to the latest report by transaction service provider SWIFT. In August, the yuan was in fifth place in the global table and used for 1.94% of global transactions, which decreased to 1.85% in September.

The yuan's market share peaked in August 2015 near 2.80%, but it has failed to break the 2% barrier since Beijing took measures to stem capital outflows last year, including increased scrutiny of large outbound investments, overseas money transfers and foreign currency purchases.

Alexander Larin, senior analyst at the Russian Academy of Sciences' Institute of Far East Studies, told Sputnik that the dip in the yuan's global popularity was largely predictable as a result of policies to contain capital outflows and ongoing concerns over currency depreciation.

"China has entered a period of 'new normalization,' to tackle issues of economic development and the Chinese leadership is seriously engaged in restructuring the economy," he explained.

© REUTERS / Tyrone Siu
A man walks past an advertisement promoting China's renminbi (RMB) or yuan, U.S. dollar and Euro exchange services at foreign exchange store in Hong Kong, China, August 13, 2015
Chinese President Xi Jinping addressed China's 19th Party Congress opened on Wednesday, where he reiterated his intention to lead China away from an economy based on construction, mining and manufacturing to one which is consumer-led.

"Judging by Xi Jinping's report to the congress, there is a very decisive reorientation of the economy from exports to domestic consumption, as well as to reduce excess production and overloading the market. Problems in these areas have indirectly affected the decline in the renminbi's turnover on the international market."

© REUTERS / Isaac Urrutia/File Photo
Venezuela Seeks Dollar Freedom by Pricing Oil in Yuan
Despite this short-term drop in the renminbi's global use, it is unlikely that the Chinese government will back away from its long-term intention of increasing international trade in yuan, which was given a boost by last year's inclusion in the IMF's basket of reserve currencies.

"SWIFT figures could show a slightly higher or lower place [in the world ranking] than today, but it isn't threatened by a significant drop. China will continue to make serious efforts to consolidate the position of the renminbi as an international currency," Larin predicted.