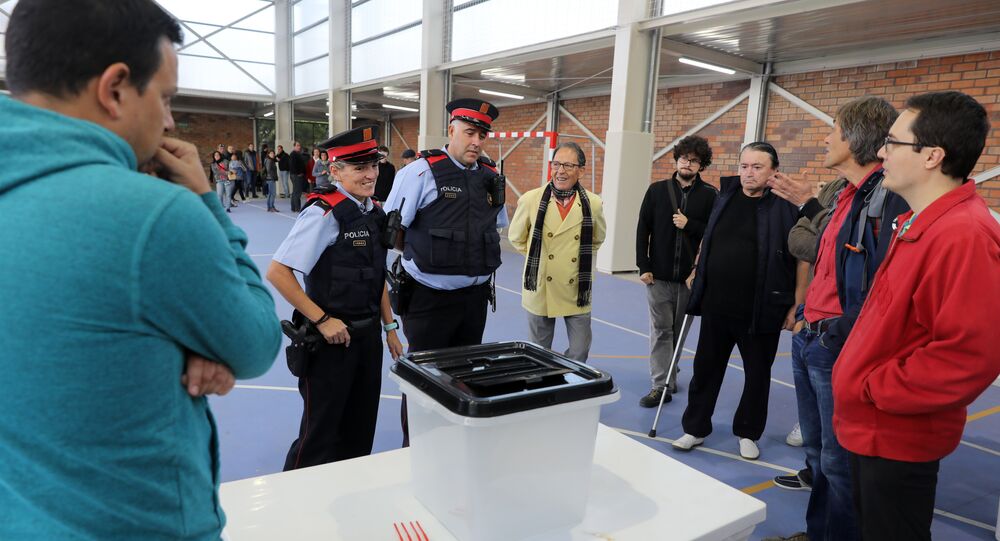 The Spanish government is still waiting for Catalonia's leader to clarify the status of the region. At the same time, the independence referendum has put a strain on the region’s economy, hitting local businesses hard and affecting daily operations.

MADRID (Sputnik) – El Mundo newspaper reported, citing the director of the Spanish Trade Registration Office Ana del Valle, that just over the past week, 92 companies had left Catalonia, while the overall number of companies moving to other regions in the country had reached 691. The newspaper added that October 9 and October 10 were the busiest days, as 212 and 175 companies left Catalonia, respectively.

This move followed the October 6 decree by the Spanish government, aimed at facilitating the procedures for changing the companies' legal addresses from Catalonia to other regions.

The newly released figures from the country's registry office show a significant decline in the newly registered organizations in Catalonia in the third quarter of 2017. Their total number fell by 26.8 percent, while in Spain as a whole this decrease amounted to 11 percent. Also, the number of operations to increase market capitalization has dropped in Catalonia by 12.2 percent over the same period, while in Spain the total fell by only 1.7 percent.

© REUTERS / Susana Vera
Spain's Constitutional Court Rules Catalonia Independence Referendum Law Illegal
The situation around the Catalonia region has been significantly aggravated after the independence referendum, held on October 1. About 2.26 million Catalans took part in the vote, around 90 percent of them supported the region's secession from Spain. Despite this, Madrid has repeatedly called the vote illegal.

On October 10, Catalan leader Carles Puigdemont said that the vote results had shown that the region had received the right to become an independent state in the form of a republic. However, Puigdemont urged the regional parliament to suspend the declaration of the region's independence and instead push for talks with the central authorities.

In response, Madrid set Monday as a deadline for Puigdemont to clarify the status of Catalonia. Puigdemont, in turn, called for a dialogue between the Catalan and Spanish authorities on the independence issue.

The Spanish government has vowed to invoke Article 155 of the Spanish Constitution, which would limit Catalonia's self-governance, in the event it receives an unsatisfactory response, or no response, from Puigdemont.