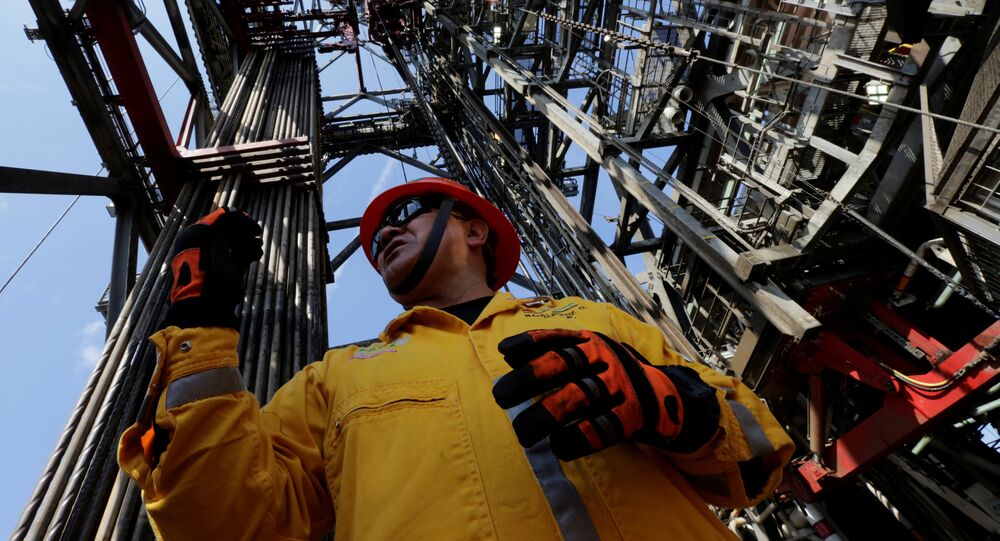 Hurricane Nate is disrupting most of the US Gulf Coast crude oil output, while hardly affecting the refineries, which are poised to lift global oil prices, along with such factors as a possible OPEC-Russian oil cap extension, and structural disinvestment in the industry.

Kristian Rouz – Hurricane Nate, originating from Central America as a tropical depression, bore down on the Gulf Coast, home to multiple offshore oil rigs. While some US oil production was curtailed ahead of the hurricane’s landfall, global oil prices are experiencing moderate upward pressure, as traders are factoring in the risks of disruption.

Hurricane Nate has so far affected some 92 percent of the US Gulf of Mexico oil output and up to 3 percent of oil refining capacity in the region. This might potentially lift US gasoline and other fuel prices, in a similar scenario to the hurricane Harvey’s aftereffects.

"The major difference between Harvey and Nate is that the trajectory of Nate brings it right through the heart of the US Gulf of Mexico oil and gas producing region," Andy Lipow of Lipow Oil Associates says.

Up to 300 offshore oil platforms were evacuated ahead of the storm, which is a significantly larger amount than that affected by Harvey only six weeks ago. BP and Chevron say they are closing their offshore platforms, which produce a combined 1.2 million barrels per day, or 71 percent of total output in the region. Closures by other companies, including Anadarko, Royal Dutch Shell, and ExxonMobil have resulted in an almost total disruption of crude production, whilst the vast majority of refineries are still running full-steam.

© REUTERS / Carlos Barria
In Irma's Footsteps: Life-Threatening Hurricane Nate Heads Toward US Gulf Coast
This means oil prices are poised to increase in Nate’s aftermath as current projections say only 15 percent of the US refining capacity could be affected, whilst up to 30 percent of US crude production is offline.

Meanwhile, Harvey primarily affected the oil refining regions, knocking out up to 25 percent of  US refining capacity. This was not supposed to provide a boost to the crude prices, but it did, meaning the aftereffects of Nate could drive oil above $60/barrel.

"High water is already a problem in many southeast Louisiana parishes," Jim Waskom of the Office of Homeland Security and Emergency Preparedness in Louisiana says. "High tides and easterly winds in recent days are impacting some areas ahead of the storm. Those conditions may worsen over the weekend."

© AP Photo / Eric Gay
Fuel Prices Rise as Harvey Disrupts Gulf Coast Oil Infrastructure
Besides, the storm has already resulted is a shutdown of the Southwest Pass, an oil and gasoline shipment route from Louisiana to Florida, Latin America, and Europe.

US weather conditions and oil output disruptions are not the only factor the crude traders are looking at. In light of the recent visit by the Saudi King to Russia, the probability of another extension of OPEC and Russian oil production caps beyond March 2018 seems increasingly likely.

This could drive oil prices up in the longer-term.

"We have to keep all options open. President Putin agreed with us on this and expressed his readiness to extend until the end of 2018 if this is agreed," Saudi energy minister Khalid Al Falih said.

Another problem the global oil industry faces is of a structural nature. Most oil giants have been issuing debt at the fastest pace since 2014, when oil prices were above $100/barrel. Oil producers are seeking to refinance amidst the still-subdued global oil prices, meaning a significant share of their operation is still facing disinvestment pressures.

"There’s a growing confidence, but there’s still a fair amount of skepticism on the market on whether or not this (recent crude rally) is truly a sustainable move in oil," Jim Brilliant of Century Management Investment Advisors. "There’s a big push now by not only lenders, but by investors to live within cash flows."

That all being said and despite Nate perhaps increasing oil prices in the near-term, the structural issues the global energy industry is facing, will keep the upward pressure on for the medium to long-term future.