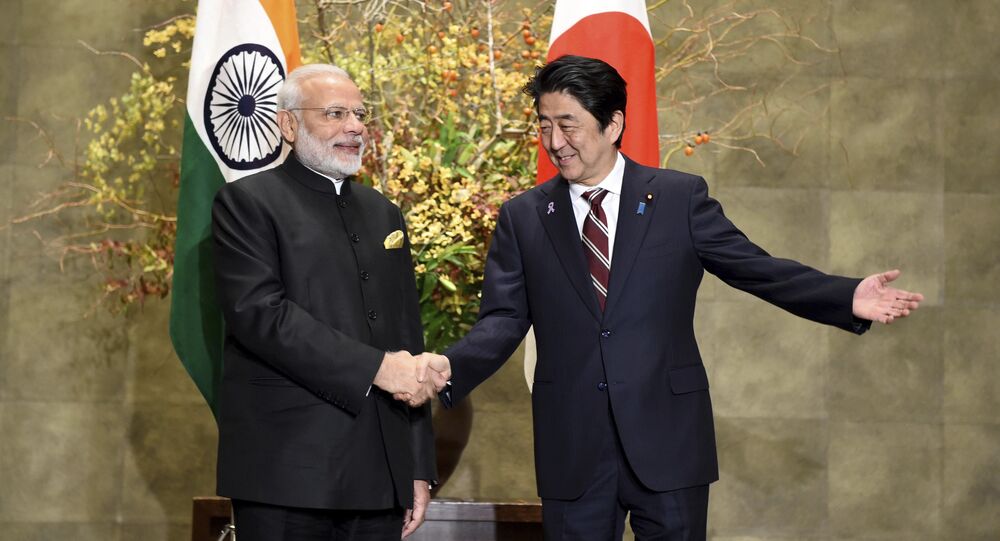 India and Japan are expected to commit about $40 billion initially to the proposed growth corridor with their strategic partnership and maritime cooperation playing a key role in the development of the corridor.

New Delhi (Sputnik) — Japanese Prime Minister Shinzo Abe's two-day visit to India is expected to witness the launch of the Asia Africa Growth Corridor (AAGC), a project that is regarded as a counter to China's One Belt, One Road Initiative. Abe arrived in Ahmedabad, Gujarat, on Wednesday and was received by Indian Prime Minister Narendra Modi at the airport, a break from traditional diplomatic protocols; regarded as a gesture that is reserved for very few foreign dignitaries.

"Japan is ready to commit $ 30 billion for the AAGC while India is expected to commit about $ 10 billion in the proposed corridor. An announcement on this is expected in next few days. These investments will be supplemented by other institutions. The actual investment may go much higher as $ 40 billion is the initial commitment for launching AAGR," Mint quoted Sachin Chaturvedi, director general of Research and Information System for Developing Countries (RIS), a New Delhi-based think tank.

© AP Photo / Manish Swarup
India, China Struggle to Complete OBOR-Like Project in Southeast Asia
The idea of AAGC emerged in the joint declaration issued by Prime Ministers Narendra Modi and Abe in November 2016. This year in May, THE Research and Information System for Developing Countries (RIS) along with the Economic Research Institute for ASEAN and East Asia and Institute of Developing Economies, Japan External Trade Organization (JETRO) released a vision document on the corridor on the sidelines of the annual general board meeting of African Development Bank (AfDB) in Gandhinagar, Gujrat.

Prime Minister Modi, in his inaugural speech at the African Development Bank event, had said that India was working with the US and Japan to support development in Africa. Experts say India and Japan have common strategic and maritime goals and the two countries would like to maintain the balance of power, particularly with China's rise.

"The synergy between the two nations has been rising since 2014 and PM Modi and Japanese PM Abe share a personal rapport. There exists common strategic understanding between India and Japan on multiple aspects in the region, especially when it comes to China and its rise. Owing to China's expanding maritime presence from the Sea of Japan to the Indian Ocean rim, Japan has become equally keen in building a maritime partnership with New Delhi. Even in the latest Doklam standoff, Japan not just supported India but also criticized China for its expansionist policies," Dr. Swaran Singh, Professor of International Relations, at the Jawaharlal Nehru University told Sputnik.

On the Asia Africa Growth Corridor, Singh says "it is and will be seen as India's counter to the China-Pakistan Economic Corridor or Maritime Silk Road. We are keen on working with Japan in promoting connectivity, infrastructure, and capacity-building across the ‘Indo-Pacific community' which has been a pet project of Abe."

India not only declined a Chinese invitation to join OBOR but has objected to the trillion dollar infrastructure initiative on the grounds that it violates the country's sovereignty given that the CPEC, a major strand of it, runs through disputed Kashmir. New Delhi had also drawn attention to the debt trap countries like Sri Lanka had fallen into by accepting Chinese loans for infrastructure projects, in addition to humongous environmental costs.