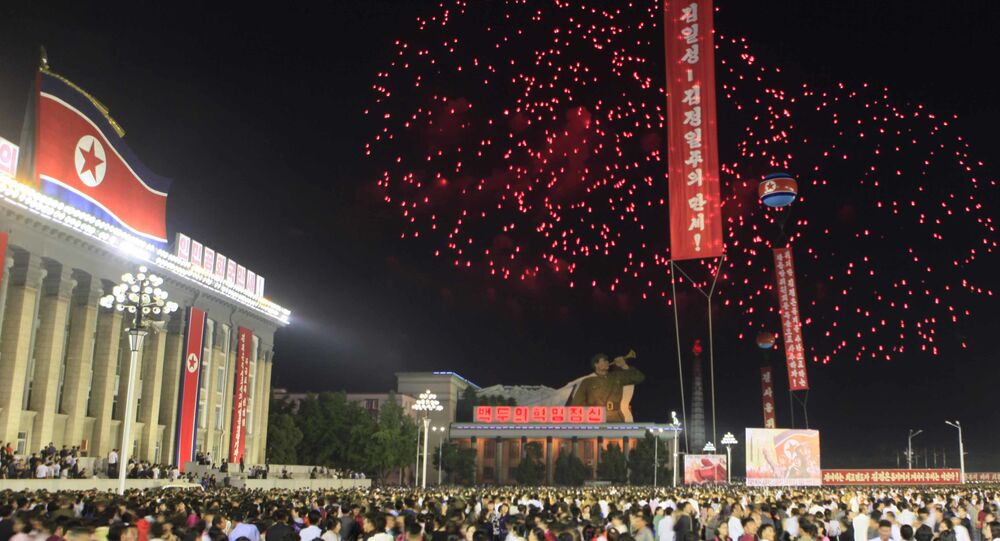 Experts told Sputnik that joint projects of Russia, North Korean and South Korea in the Russian Far East could help defuse tensions on the Korean Peninsula.

MOSCOW (Sputnik) — Russia’s initiative to involve North Korea in economic cooperation in the region by developing trilateral projects with both Seoul and Pyongyang could help defuse tensions on the Korean Peninsula, experts told Sputnik.

"It is necessary to gradually involve North Korea in cooperation in the region, and Russia has specific proposals, everyone knows about this — a joint road linking the Trans-Siberian Railway and the Korean railways through North Korea, pipeline transport, development of North Korean ports," Putin said at a plenary session of the Eastern Economic Forum (EEF).

Following his negotiations with South Korean President Moon Jae-in on the sidelines of the EEF on Wednesday, Putin reaffirmed Russia is ready to implement trilateral projects with the participation of the Democratic People's Republic of Korea.

The latest efforts from Russia to help defuse escalating tensions on the Korean peninsula, especially after Pyongyang’s successful nuclear test over the weekend, could actually work, experts told Sputnik.

"This [Russia’s] plan is very advantageous from different perspectives – from geo-economical point of view as well as geopolitical point of view. It [the initiative of the trilateral talks] could make it possible to stabilize the Korean peninsula, it also could give North Korea resources to develop its economic system and maybe even make its economic system more open," Georgy Toloraya, a former Russian diplomat and the director of the Center for Asian Strategy at the Institute of Economics under the Russian Academy of Sciences told Sputnik.

The Russian expert added that this initiative needs participation from both countries on the Korean Peninsula to work.

"It’s important to realize that this initiative can’t be fulfilled unless South and North Korea start dialogue in some form. North Korea needs to at least start moving toward normalizing relations with other countries as well," Toloraya said.

The expert believes the initiative is a long-term plan that cannot be realized in the short-term.

© Sputnik / Iliya Pitalev
N Korea Supports Economic Cooperation With Russia, S Korea, But Time Not Ripe
North Korean Minister for External Economic Affairs Kim Yong Jae told Sputnik on Thursday that Pyongyang is not against trilateral economic cooperation with Russia and South Korea, but the situation is still not ripe for that.

"We are not opposed to trilateral cooperation [with Russia and South Korea], but this is not an appropriate situation for this to be implemented," Kim said on the sidelines of the EEF.

Russia’s recent foreign policy regarding issues on the Korean Peninsula fits a pattern in which Moscow seeks to re-establish its status as a "great global power," Chinese experts told Sputnik.

"Currently, it’s obvious that Russia started to pay more attention to the issues on the Korean Peninsula and in Northeast Asia. It’s not because of economic reasons for Russia. It’s because Russia wants to reestablish its status as a ‘great global power’ by asserting influence on important regional issues," Shi Yinhong, a professor of international relations at the Renmin University in Beijing, told Sputnik.

The Beijing-based expert argued that the trilateral projects are unlikely to resolve the ongoing crisis related to North Korea’s nuclear program.

"The trilateral projects only help boost Russia’s economic existence in the Far East. It does not have a lot to do with the urgent ongoing crisis on the Korean peninsula," Shi said.

"To be honest, Russia is the only nation among the five permanent members of the United Nations Security Council (UNSC), which has reservations on new rounds of tougher sanctions against North Korea. Because Russia has always tried to follow an independent foreign policy, it’s possible for some part of the trilateral projects to be violating recent UNSC sanctions against North Korea," Shi said.

He noted that, under existing UNSC sanctions, Russia’s economic cooperation with North Korea will be very limited.

Russia’s position at the UNSC could also change when it comes to the voting on the next round of sanctions against North Korea, the expert pointed out.

"Just like other nations, Russia sometimes is self-contradictory on different international stages. It remains to be seen whether Russia will follow the same position as Putin expressed that sanctions would not help resolve the crisis on the Korean Peninsula, during upcoming UNSC sessions on North Korea. I believe Russia may not follow the exact same position and could make some concessions in the upcoming UNSC voting," Shi said.

Despite joint statements issued by China and Russia expressing common ground regarding to the crisis on the Korean peninsula, the two countries may still have different positions when it comes to UNSC voting on resolutions against North Korea, the Chinese expert suggested.

"We hope North Korea can have a clear view of the situation and make the correct choice, instead of being insisting on its own path and challenging the consensus and the bottom-line of the international community," the minister told a press conference.

US experts told Sputnik that Russia’s initiative on trilateral projects with both Seoul and Pyongyang could cause concerns from the United States.

"This initiative will likely be viewed warily by the American government and media. The suspicion probably will focus in part on recent Russian and Chinese joint efforts criticizing US military moves and diplomatic pressures on the Korean peninsula and calling upon the United States to resume talks with North Korea on terms that are unacceptable to the US government," Bob Sutter, the principal Investigator for the National Bureau of Asian Research’s study on Russia-China cooperation and a professor at George Washington University, told Sputnik.

Sutter explained that this is because opinion in Washington DC is generally very negative about the Russian government and its intentions towards the United States, as Russian-US relations are at their lowest point since the Cold War.

However, the US expert added that the Russian initiative would appear more promising if it leads to North Korea reducing its truculence and showing willingness to freeze and end its nuclear weapons development.

Why German Companies Interested in Investing in Russia's Far East