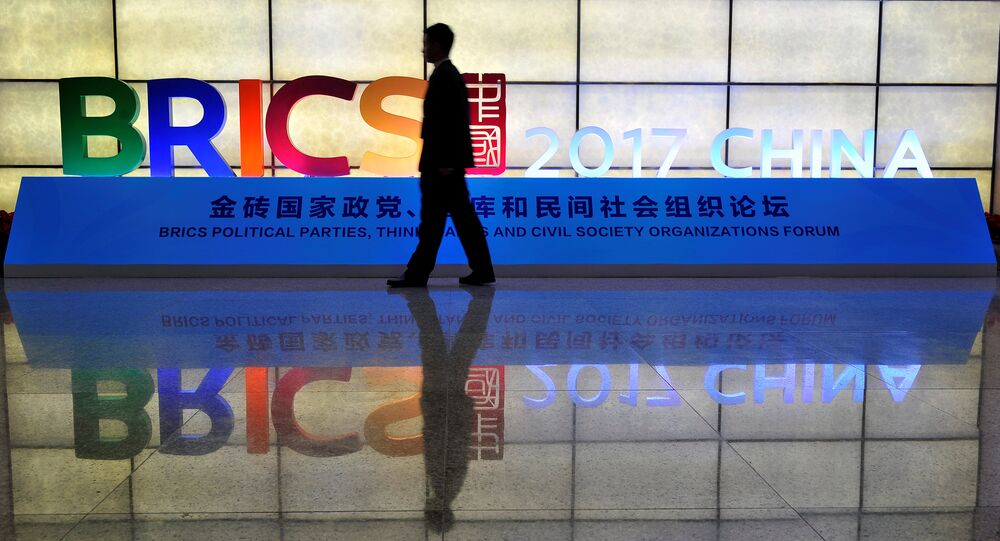 XIAMEN (Sputnik) — The New Development Bank (NDB) run under the aegis of BRICS should give priority to funding multinational projects, which bring together more than two countries of the bloc, President of the Russian Chamber of Commerce and Industry (CCI) Sergey Katyrin told Sputnik on Sunday.

"Sure, each country has its own projects, but we want the bank to focus on the projects that bring together several [BRICS] countries," Katyrin said on the sidelines of BRICS Business Forum.

© AP Photo / Mark Schiefelbein
Working Group on Aviation Meets Needs of BRICS Nations - Russian CCI Chief
The Russian CCI president added that Russia was participating in numerous bilateral projects in cooperation with each of the BRICS countries, but the number of projects, which involve three or more BRICS nations, was rather low.

"If I'm not mistaken, the only project which involves all five [BRICS] nations is the Klyuchevskoye gold deposit project in [Russia's] Zabaikalsky Territory," Katyrin said.

The official added that at least three BRICS nations were also working together on a railroad project in Brazil.

© REUTERS / Stringer
BRICS Countries in Talks on Establishing Joint Credit Rating Agency - Official
Katyrin said that the Russian CCI had asked the NDB to provide more detailed information on the projects that the bank had examined as potential investment targets.

He explained that Russian businesses needed this information to take part in potentially beneficial projects funded by the NDB.

Katyrin chairs the Russian part at the BRICS Business Forum, a major side event of the bloc's summit, scheduled for September 3-5. The Business Forum brings together CEOs and business leaders of the BRICS nations, Russia, China, Brazil, South Africa and India.