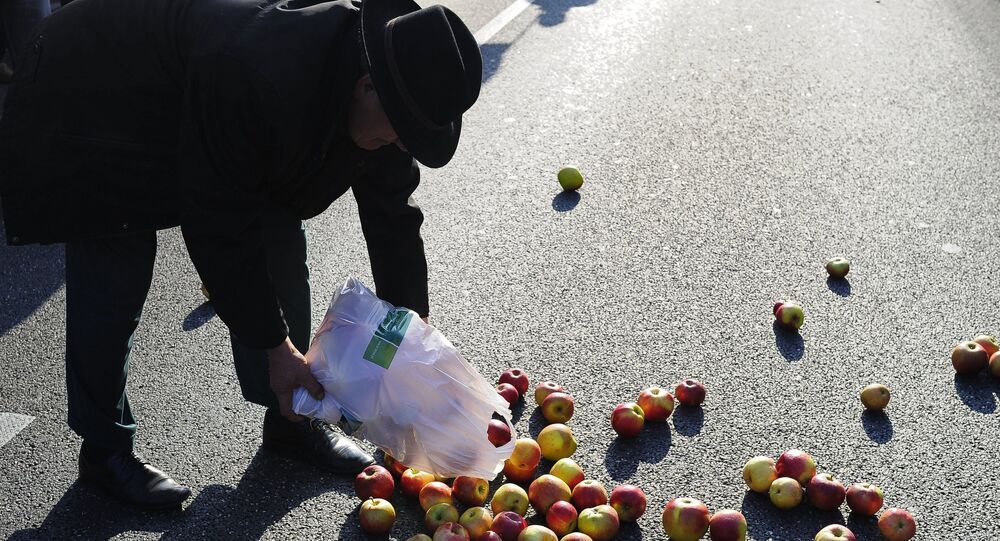 Three years ago, Polish agricultural producers lost access to their biggest market in Russia after Moscow declared a food embargo against the European Union in response to Western sanctions imposed over the Ukrainian crisis.

WARSAW (Sputnik) — The current situation shows that Poland has failed to recover from the losses it incurred after failing to completely reroute its apple consignments, previously delivered to Russia, to other countries.

According to the Russian trade mission to Poland, Warsaw has been losing $1.4 billion annually due to Russia’s countermeasures when compared with 2013.

Polish farmer Slawomir Luszak specializes in growing apples. These are the so-called Polish apples that were mentioned by all Russian media outlets in 2014, when Russia responded to Western sanctions. Luszak was among those affected.

Luszak’s farm is located south of Warsaw, where apple trees account for 90 percent of his orchard.

"Well, what can you say? Of course, gardeners could be much worse off. It has become much harder to sell our produce, and prices have plummeted," he said.

The consequences of the Russian countermeasures can be seen even today, although Polish producers had enough time to find alternative markets. They have failed to cope with the problem properly, even after rerouting export flows to other countries.

"It is mostly Europe, mainly South Europe and all counties of former Yugoslavia, as well as some countries of Western Europe and North Europe. We also sell some goods to our eastern neighbors, such as Belarus and Ukraine. We also send some apples to the three Baltic states, to China, Vietnam, India, Egypt, Canada and the United Arab Emirates. In all, we trade with about 50 countries, but all this does not compensate for Russia," Luszak said.

As a member of the board of the Association of Polish Fruit Growers, he is able to offer insightful comments on the issue of apple exports.

So far this year, the situation with prices remains unclear because the apple season is only beginning. However, given what has happened in recent years, farmers are not very optimistic in their outlook.

© AP Photo / Michael Probst
Siemens Scandal: US Firms 'Will Shamelessly Occupy New Niche' in Russian Market Amid EU Sanctions
"Everything depends on apple varieties and their quality, but prices have plunged in every category," Luszak said.

Last year, premium fruit prices were 20 percent less than they were 3-5 years ago, the farmer added. High-quality apples cost 30 percent less than in the "pre-sanctions" period, while the prices for so-called satisfactory apples fell by up to 40 percent.

"The food processing industry is well aware of the situation with apples and uses it to push the prices further down. The supply is abundant and the buyers are seizing the moment to scale down purchasing prices," the farmer added.

No choice but to grow apples

Despite plunging apple prices, market forces did not not apply to this situation, and Poland even saw an increased apple output.

"Theoretically, it is possible to assume that, if we are getting low prices, then we will produce fewer apples. This may seem illogical, but Poland is now witnessing the diametrically opposite situation," Luszak said.

According to the farmer, many farms that used to grow potatoes and grain had converted to horticulture later on. Apple orchards were the most profitable horticulture sector, therefore attracting many new producers.

He added that such farmers now own specialized machinery and equipment, such as orchard sprinklers that could not be used for potatoes or grain, and it was impossible to sell this equipment overnight and start some other business.

"There is one more aspect. Horticulturists were able to take advantage of the European Union’s farmer support programs for a while. These programs also benefited farmers, who converted their land plots to horticulture. If they bought new equipment, built new buildings and planted trees, they are unable to curtail their business overnight. Against the backdrop of all these issues, and due to the fact that modern agricultural machinery has already been purchased using EU funding, Poland continues to expand apple output, also growing more cherries, pears and plums," Luszak added.

Expanded production and low prices put the country’s farmers in a difficult situation. "Some farms will go bankrupt. Everything will be all right if the weather is fine. But a farm may become bankrupt if there is a hail storm or untimely subzero temperatures. Profits are so low that we are no longer able to restore the orchard," the farmer said.

© Photo : Coop
Mouthwatering Balls: Swiss Supermarket First to Offer Insect-Based Food
According to Luszak, while apple trees make up 90 percent of his orchard, he is already considering growing some other fruits.

"Today, I have some pears and cherries [in the orchard]. I would now like to change the situation a bit and to start growing more cherries. This is now on my mind," the farmer said.

Luszak added that cherries require much more manual work, but they allowed a producer to be independent of weather conditions that could affect apples during the season.

The dollar is to blame for everything

Martin Struk, a Polish food market analyst, believes that Polish food producers and exporters have achieved some positive results over the past three years after the introduction of Russian countermeasures.

"Only three years have passed since Russia banned the imports of Polish foods, but it has already become possible to reroute over two-thirds of available volumes to other markets. This is a very good indicator, and Polish producers are gaining a foothold on previously unfamiliar markets despite lower prices," Struk told Sputnik.

The official added that Polish producers had been exploring new markets, such as China.

According to the expert, price reductions have been mostly caused by the market situation.

© Sputnik / Sergey Guneev
US Using Anti-Russia Sanctions Bill to 'Push Russia Out' of European Energy Market
"One should not think that Russian sanctions have influenced us so much. The current market situation resulted in decrease of the prices. But our goods will already be on the market when prices skyrocket again," he said.

The official explained the price fluctuations by citing the volatility of the exchange rate between the US and Polish currencies.

"The US dollar is now fluctuating sharply against the Polish zloty. First, the dollar cost three zlotys, then went down and cost over four zlotys. Then it grew to 3.5 zlotys. Now the dollar is rebounding once again. Of course, all these issues have impacted prices," he said.

Soon after Russia’s decision to ban import of Polish apples among other food products, Minsk decided to export its own apples to Moscow, replacing them at a domestic market with apples from Poland. In addition, the relevant Russian agencies regularly expose contraband re-export schemes in violation of the food embargo.

"At first, there were attempts to re-export the crop production via other countries, including Belarus, which became the main importer of Polish apples. It should be noted that not all apples that have been rerouted from Poland to the Belarusian market have later been smuggled into Russia. This rerouting process often assumed other, legal forms," a source with the trade mission said.

For example, Poland sells its apples to Belarus, and then these fruit replace Belarusian apples being exported to Russia. Minsk has also converted many more apples into apple juice and apple concentrates and therefore exported more of this produce to the Russian market. Today, Belarus accounts for over 40 percent of Polish apple exports.

© AP Photo / Emilio Morenatti
'We Just Eat More': Kiev Explains Why Half Ukrainians' Budget Goes on Food
Although Poland has managed to reroute some volumes of its crop output, including through expanded consumption within the country and by converting more apples into apple juice and apple concentrates, profitability has plunged considerably.

The Russian Federal Service for Veterinary and Phytosanitary Surveillance (Rosselkhoznadzor) regularly uncovers Polish apples being smuggled into Russia. Such production is destroyed. According to Rosselkhoznadzor’s sources, such apples are imported through Belarus, which receives them under fake documents. Another smuggling option is importing apples into Belarus under the pretext of using them in that country. However these apples are later smuggled into Russia, Rosselkhoznadzor’s sources told Sputnik.

Polish producers who are suffering losses continue to protest from time to time. In 2016, the Association of Polish Fruit Growers staged protests in Warsaw, demanding that sanctions policy against Russia be changed.

"However these voices of protest and demands are drowning in the entire chorus of anti-Russia rhetoric. Polish politicians are effectively neglecting the interests of Polish producers," a source from the trade mission said.

The situation with rerouting Polish meat and dairy goods is even more complicated.

The situation of meat and dairy producers has been aggravated by Russian counter-sanctions and by the overall market situation. For example, Polish pork exports have declined and continue to do so because of the restrictions introduced following the discovery of African swine fever virus (ASFV) outbreaks. These restrictions were introduced by several Asian countries with large markets.

Regarding the dairy market, Poland, formerly a major dairy goods supplier, has now downsized exports primarily due to falling global market prices for powdered milk and the products made of such milk.

Sputnik has contacted officials at the Polish Ministry of Agriculture and Rural Development, as well as at the national Customs Service, asking them to comment on the agricultural output and export volumes. No response has been given yet.

US Expands Market Access for Rice Exports to Columbia

When PR and Marketing Get Gory: Paid Rioting Gains Momentum in US Politics