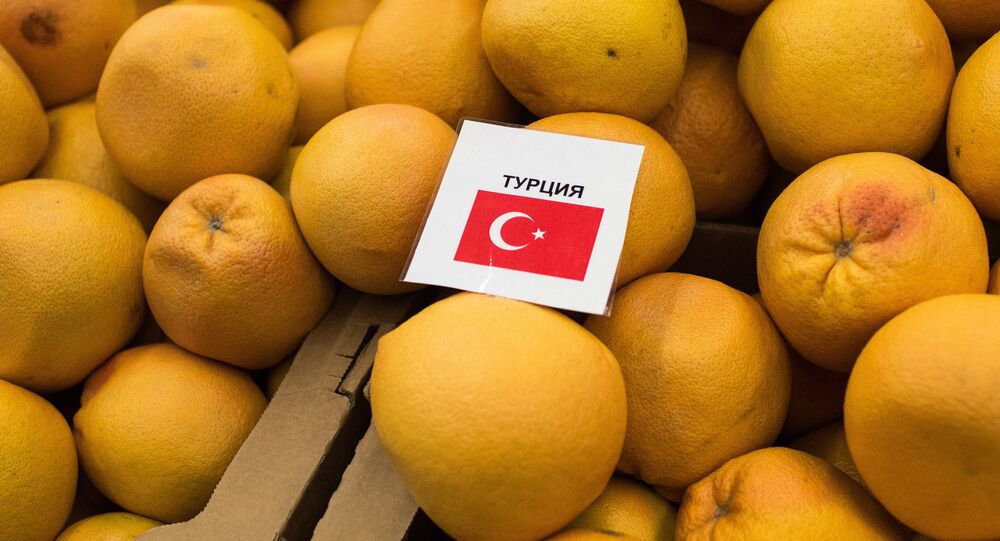 Ankara will have to take retaliatory measures if Moscow does not lift the trade restrictions on the delivery of a number of agricultural products, Turkish Economic Minister Nihat Zeybekci said Wednesday.

ANKARA (Sputnik) — Zeybekci said that the Turkish government is experiencing heavy pressure from exporters because of the remaining trade restrictions on some vegetables.

"We will be forced to take retaliatory measures, since we can not ignore it anymore," Zeybekci said, addressing entrepreneurs in Ankara.

According to the minister, Ankara pins special hope on the upcoming negotiations with the Russian side in Izmir on August 17-19.

"We do not want bans on the export of tomatoes, other vegetables, milk and meat. For some products, customs duties may be raised in certain seasons, we understand it, but we need to find a solution," the Turkish minister added.

As Russian Deputy Prime Minister Arkady Dvorkovich announced that Russia and Turkey will hold its first full-fledged consultations on limited export of Turkish tomatoes to Russia on August 18 in Izmir.

© AP Photo / Thanassis Stavrakis
Russia's Turkish Imports Rise Over 40% in 2017 After Lifting of Food Embargo
Russia imposed an embargo on the supply of a number of products from Turkey on January 1, 2016 in response to the attack of the Turkish Air Force on the Russian Su-24 aircraft in Syria. Later, the restrictions were partially lifted.

By early June, the ban was in force for frozen meat, chicken and turkey by-products, tomatoes, cucumbers and gherkins, fresh grapes, apples, pears and strawberries. In addition, the Rosselkhoznadzor in 2016 introduced a ban on the supply of Turkish tomatoes, peppers, pomegranates, eggplants, lettuce and iceberg lettuce, zucchini and pumpkins to Russia.

In early June, the government lifted the embargo on the import of Turkish products, excluding tomatoes. Other restrictions of the Rosselkhoznadzor are still in place.

Russia May Lift Embargo on Some Turkish Agricultural Imports in 2016