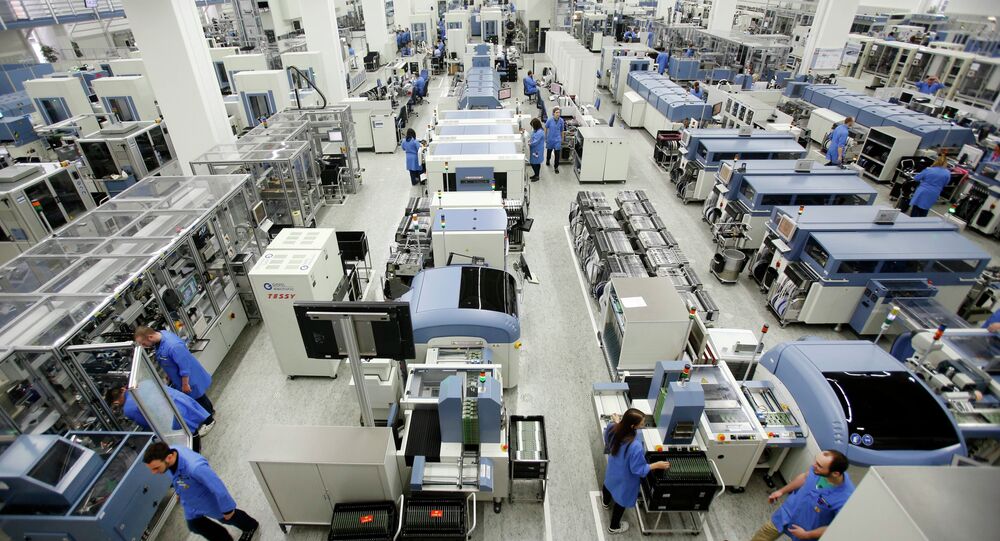 US companies are likely to take advantage of the EU's decision to introduce anti-Russian sanctions over the Siemens scandal, political expert Alexei Mukhin argued. According to him, Siemens could easily be replaced by American companies, "which will shamelessly occupy the new niche" in the Russian market.

© REUTERS / Lukas Barth
EU Sanctions on Russia Over Siemens Scandal 'Nothing Else But PR'
On Friday, the EU imposed additional sanctions on Moscow over a scandal surrounding the transfer of turbines supplied by German company Siemens to the Russian peninsula of Crimea in violation of previous EU sanctions. The EU added three Russian nationals, including two Russian Energy Ministry officials and three companies to its sanctions list over the issue.

According to Mukhin, Siemens doesn't want to leave the Russian market, as the niche can be easily occupied by someone else.

"Siemens has been making harsh statements in different directions, trying to soften the blows from all sides. […] In my opinion, it doesn't want to lose the Russian market. This is a very important market for the company and here, I'm afraid, it could be replaced by US firms. They would shamelessly occupy the new niche which the Europeans could leave amid sanctions," Mukhin stated.

The expert also noted that Russian and US companies are discussing possible cooperation in the area.

"They [the US] already cooperate with us. The paradox is that in some unimaginable way the American Themis's punishment for the US companies cooperating with the ‘aggressive' Russia is not very tough," he said.

In early July, Siemens created a task force team to investigate reports about the alleged transfer of turbines produced by Siemens Gas Turbines Technologies, a joint venture with the Russian Power Machines company, to the Crimean peninsula.

On Friday, the company said that all four of its turbines intended for a project in Taman were illegally delivered to Crimea in an alleged violation of sanctions.

The Russian Foreign Ministry also stated that Moscow considers the EU responsible for the "unfriendly and unjustified" decision of the sanctions' extension and added that the Russian government reserves the right to respond.

© Sputnik / Ramil Sitdikov
Moscow Reserves Right to Respond to EU Sanctions Extension Over Siemens Scandal
On Saturday, the Russian Energy Ministry said that new EU sanctions are interference in the dispute of Siemens and Russian Technopromexport company, emphasizing that it is a direct violation of international legal norms.

Commenting on the issue, Russia's Technopromexport company, which is part of Rostec, said it purchased turbines for Crimean power plants in the secondary market, with Russian engineering companies modernizing them.