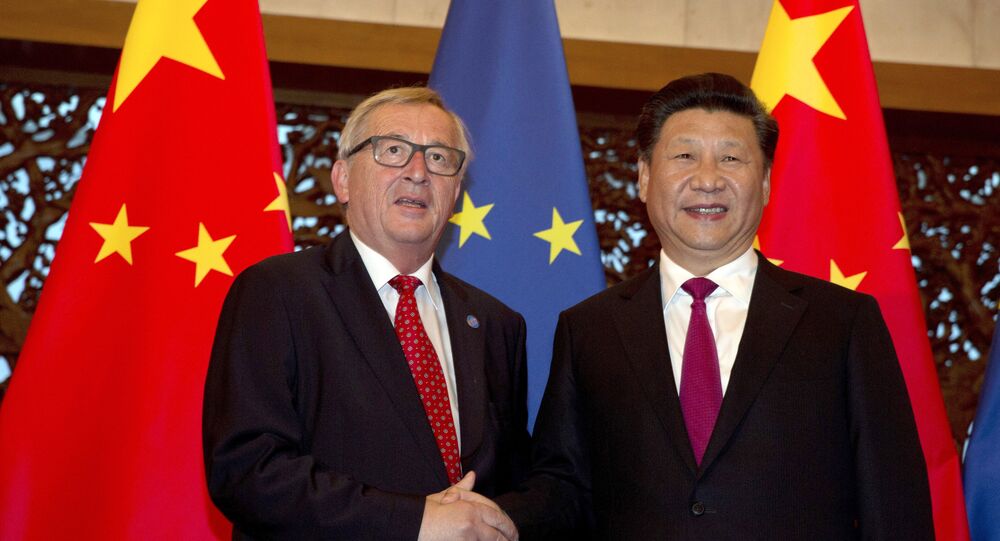 Last year the German firm Kuka, which manufactures robots, was sold to Midea, a Chinese company which makes washing machines and rice cookers.

Mr. Juncker is reportedly planning a change in the European Union rulebook which would ensure strategically important companies could not be fall into the hands of companies or individuals from non-EU nations.

He is expected to lay out some of his ideas in a State of the European Union speech on September 13.

A survey by the Ernst & Young consultancy firm said the Chinese made acquisitions or investments in Europe last year totaling 75 billion euros (US$87 billion).

German Economy Minister Matthias Machnig said the plan would be to stop companies who were backed by huge Chinese government subsidies or were buying at the behest of Beijing for political rather than commercial reasons.

Beijing has a policy called 'Made in China 2025,' in which it intends to acquire technology to give it an advantage over Western firms.

#China to establish national demonstration areas for "Made in China 2025" https://t.co/iTd3JfC234 pic.twitter.com/m574L7G4E1

"Look at Kuka and other recent cases in Germany. For cases like that, we want to have the right and legal base for deeper investment probes and want to be able to reject an investment, for example, if it's not market-driven but state-driven," said Mr. Machnig.

Beijing is angry about the moves being made by Mr. Juncker and Mr. Machnig.

"We are concerned about the relevant moves of Germany and Europe," said Geng Shuang, a Chinese foreign ministry spokesman earlier this month.

Even firms not based within the European Union could be affected by the move.

ChemChina recently completed the US$43 billion takeover of Swiss pesticide and seed giant Syngenta, the biggest overseas acquisition ever by a Chinese firm.

Although Syngenta is based in Switzerland the deal probably would not have gone through without EU anti-trust approval but ChemChina agreed to sell off a large chunk of its Israel-based subsidiary Adama's pesticide, herbicides and insecticides business.

"It is important for European farmers and ultimately consumers that there will be effective competition in pesticide markets, also after ChemChina's acquisition of Syngenta," said European Competition Commissioner Margrethe Vestager at the time.

Other major acquisitions made by Chinese firms in the last 18 months include Germany's largest machinery manufacturer, KraussMaffei, which was bought for 925 million euros (US$1billion) by a syndicate of Chinese investors — the acquisition was announced in January 2016.

Let's revisit the biggest story of the week: #KraussMaffei being bought by #ChemChina https://t.co/4qSTVJMOJB pic.twitter.com/ODrpfUVVG5

But not all of them are strategically important.

Last month a Chinese investment capital firm bought French crystal maker Baccarat, which was founded in the 18th century during the reign of King Louis XV.

And British mattress manufacturer Dreams is being pursued by MLily, the biggest memory foam manufacturer in China in a £400 million (US$520 million) deal.

Growing Appetite: What’s Behind China Acquiring Companies Across the World

Chinese Economy to Grow by 32% in Next Five Years