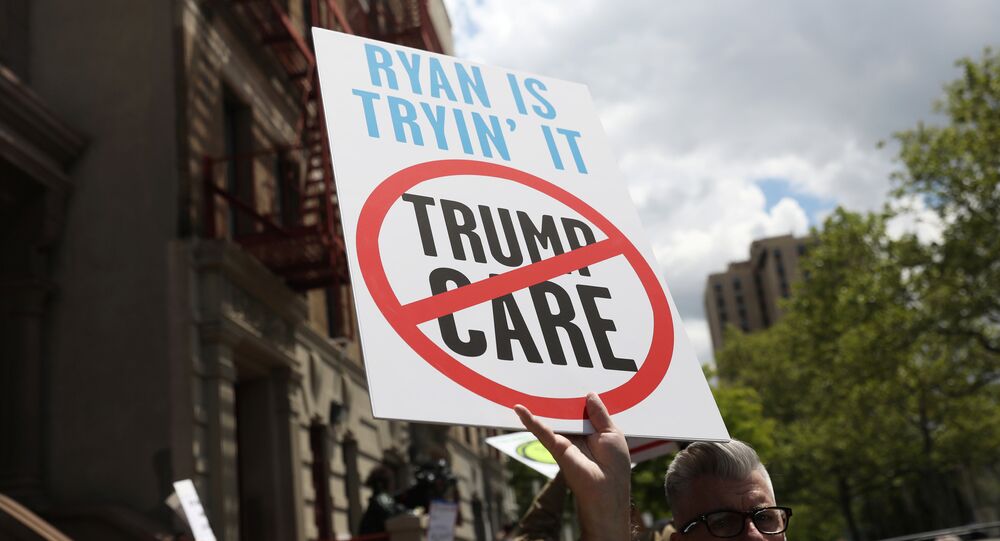 Washington politics is holding back the Trump administration’s reforms agenda, as evidenced by a yet another delay in the approval of the healthcare bill in the US Senate, meaning the tax cuts and infrastructure spending plans might be facing further delays due discord within the GOP.

© AP Photo / Jae C. Hong
Trump Urges Republicans to Repeal Obamacare, Work on New Healthcare Legislation
Kristian Rouz – Yet another setback to US President Donald Trump’s reforms agenda dealt a blow to the value of US assets, most notably, the dollar’s FX rate, on Monday, when Senate Republicans failed to uphold the healthcare reform bill.

Albeit the repeal of Obamacare is not directly connected with US economic growth prospects, the visible dysfunction in Washington politics puts into question the Trump administration’s plan to provide fiscal stimulus to the struggling economy.

On Monday, two GOP senators announced they would not support the new version of Trump’s healthcare reform bill. It is becoming increasingly apparent that, even though the Republican Party controls both Senate and the House, the President’s reform agenda is still facing stiff opposition from lawmakers of his own party.

Subsequently, the US dollar dropped against the basket of its peers, as market participants inferred from the Senate conundrum that Trump’s economic revival plan might be facing further delays, rendering the broader economy exposed to the threats of slower inflation, debt market risks, and a prospect of recession.

"We went along with a budget thinking we were going to do a repeal bill and a separate replacement legislation for Obamacare and instead we get this seven-month ordeal we’re still going through," Rep. Jim Jordan (R, OH) of the right-wing House Freedom Caucus commented on the lack of progress on the White House’s side providing a detailed reforms plan to the lawmakers.

The GOP lawmakers say they support Trump’s reforms agenda in general, but, given the White House has not yet provided a detailed outline of the proposed reforms, it is hard for the House and Senate Republicans to coordinate their actions.

© AP Photo / Matt Rourke
Republican Senate Version of US Healthcare Bill 'Fatally Flawed' - Sanders
Some GOP lawmakers tend to support a more radical approach to cuts in welfare benefits and budget spending, whilst others hold the viewpoint that proposed budget expenditures on military-industrial complex and infrastructure could be greater. Meanwhile, most Republicans agree the new budget should be revenue neutral, which is unclear whether it would be that, or not.

The stalemate in Washington politics produced a decline in the Dollar Index on Monday, whilst the US Treasury yields declined for a third consecutive day, contributing to an even flatter yield curve, and stirring fears of a looming economic downturn. US investment is being hurt by the unlucky combination of the White House’s indecisiveness and the GOP lawmakers’ reluctance to approve Trump’s ideas without looking at the details first.

"Any hopes of dollar support from a successful vote on the Senate’s healthcare bill look to be vanishing," Rodrigo Catril of Sydney, Australia-based National Australia Bank Ltd. said. "Near term, the dollar path of least resistance is down. We still think the data — inflation in particular — will provide the Fed with enough ammunition to hike in December and boost the dollar, but this is a fourth-quarter story."

The euro rose above $1.15, to its 14-month highest. Coupled with the lower US economic growth expectations, and the Federal Reserve’s more subdued tone of comments on further normalisation of monetary policies, traders and investors are opting for safe-haven assets, which is hardly encouraging as the 10-year US business cycle is drawing to its close.

"The reform momentum of the Trump administration has received another blow," Morgan Stanley analysts wrote in a note.

© AFP 2020 / BRENDAN SMIALOWSKI
US Economy Weakens in Fed Hike Aftermath, Trump to the Rescue
Despite the mounting obstacles on the fiscal policy side, the Federal Reserve is poised to start decreasing its bloated $4.5-trillion balance sheet in September, and the policymakers envision another interest rate hike in December if inflation and growth data aren’t a sheer disappointment by that point.

The Fed’s balance sheet includes US Treasury notes, and a selloff in these might push the yield up, easing the fears of the flattening curve and staving off the recession expectations, thus reinvigorating investment activity in the third and fourth quarter.

"The idea is that they (the Federal Reserve) announce balance sheet shrinkage at the September meeting and then hike in December. I think they have almost pre-announced those two decisions," Ethan Harris of Bank of America Merrill Lynch said.

Such moves on the monetary policy side give the Trump administration and the GOP lawmakers additional time to coordinate their efforts on the fiscal side. At this point, despite all protractions, the White House is planning to reach a consensus with lawmakers on the fiscal plan by September. Any visible progress on Trump’s reform agenda is expected to boost consumer spending, private sector investment, and inflation expectations by the year-end, making it comfortable for the Fed to adjust rates upwards in December.

© AP Photo / J. Scott Applewhite
US Republicans 'Must Work on 2018 Budget' Instead of Focusing on Healthcare Bill
However, the ongoing complications stemming from Washington politics might undermine such a prospect to reform implementation and policy adjustment, meaning the more disagreements arise between the Trump administration and the GOP, the closer a full-blown recession is.

"There’s a real risk that inflation expectations have already drifted down and might drift down further," Prof. Andrew Levin of Dartmouth College said.

The Trump administration’s current annual GDP growth target is 3 percent, whilst the President himself mentioned that under his fiscal plan growth could exceed 4-5 percent per year. Yet, the Fed Chair Janet Yellen in her Congress testimony last week said that in the current circumstances achieving Trump’s growth target would be "quite challenging."

US Charges Over 400 Medical Professionals With Healthcare Fraud