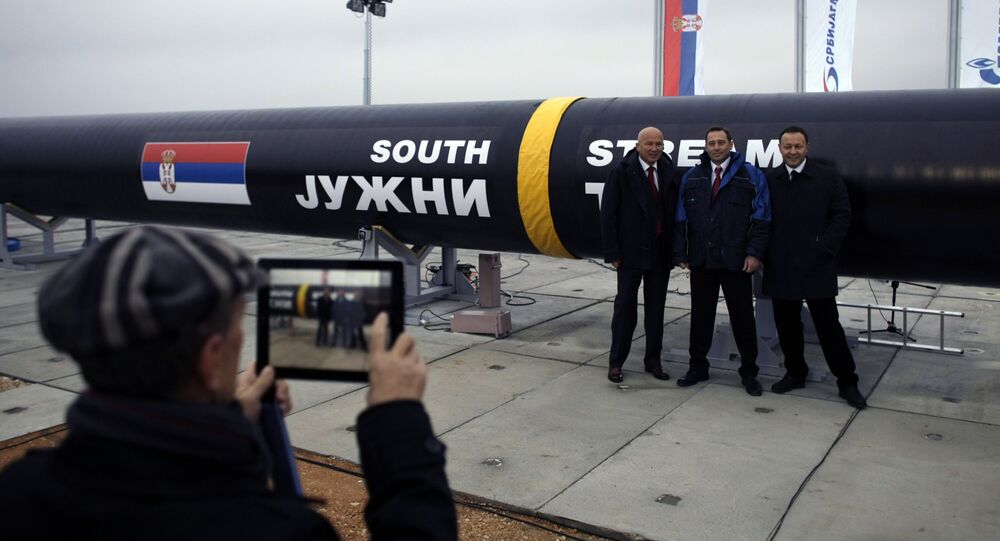 In a recent interview with Sputnik, Serbian President Aleksandar Vucic said that Belgrade hopes for Russia’s assistance in the construction of a transit gas pipeline from the border.

© Sputnik / Sergey Kompanichenko
Vucic: Serbia Hopes for Russian Help in Construction of New Transit Gas Pipeline
"At the border with Bulgaria, we will have to construct a downstream pipeline – ourselves or with the Russian help. So we will receive 9.8 billion cubic meter gas at the border. The branch lines will head for Republika Srpska, Bosnia and Herzegovina, Pristina, Croatia. And we will get the transit tax," Vucic said on Sunday.

According to him, the plan can be implemented if a gas hub in Bulgaria is constructed.

"When they create this hub somewhere on the way toward Varna, the gas will head for Sofia and from there – to Serbia," Vucic said.

The president added that if implemented the project could provide Servia with $114-171 million a year.

Experts reached by Sputnik agreed that the initiative would be good for Serbia, including additional incomes and a fresh impetus to certain industries of its economy.

© Sputnik / Sergey Guneev
South Stream Pipeline Project May Be Implemented- Russian Trade Representative in Bulgaria
"I think it would be very useful for Serbia, especially in case Gazprom does not sign a new agreement with Ukraine in 2029, and we will be left without gas. In that case, this pipeline would be the only way for the 'blue fuel' to reach [Serbia]," Vojislav Vuletic, the president of the Gas Association of Serbia, told Sputnik.

According to Vuletic, shipments of United States-produced liquefied natural gas (LNG) will not be able to meet the demands of the European market.

"This idea will not work for Europe. The German government understands this. This is why Berlin wants the Nord Stream 2 project to be implemented. As an industrial power German needs gas," he said.

© Sputnik / Sergey Guneev
Nord Stream-2 to Be Implemented Despite 'Games' Around It – Russia’s Envoy to EU
The expert added that Serbia is capable of building infrastructure for the possible pipeline project in Bulgaria in two years but Belgrade wants  guarantees from Brussels.

Economist Bozo Draskovic told Sputnik Serbia that energy is first of all a political issue. This was the reason while Bulgaria abandoned the South Stream project under open pressure.

"It is unclear whether Bulgaria will be able to protect its own economic interests, instead of serving the political interests of a third party. There are certain political risks for the project we’re talking about. Of course, such a pipeline would be very important for Serbia. First, it would reduce costs for transit via Ukraine and Hungary. Second, it would boost Serbia’s position as a regional player," Draskovic said.

© Photo : turkstream.info
Any Room for Serbia in Turkish Stream Gas Pipeline Project?
There are two possible scenarios for a second string of Turkish Stream, including running either across Greece to Italy or via Bulgaria to Serbia, according to Sergei Pravosudov, director of the National Energy Institute.

"At the moment, it is hard to say which option is possible because it depends on Brussels. South Stream would be a very beneficial project for all parties involved. But European politician were against it. Would they try to oppose a second string of Turkish Stream? Yes, So, Gazprom will decide depending on who is more reasonable – Greek and Italian or Bulgarian and Serbian politicians," Pravosudov said.

According to him, Gazprom is ready to consider the possibility of a transit pipeline from the Serbian-Bulgarian border. A joint venture could be established to implement the project, like it was done, for example, for South Stream.