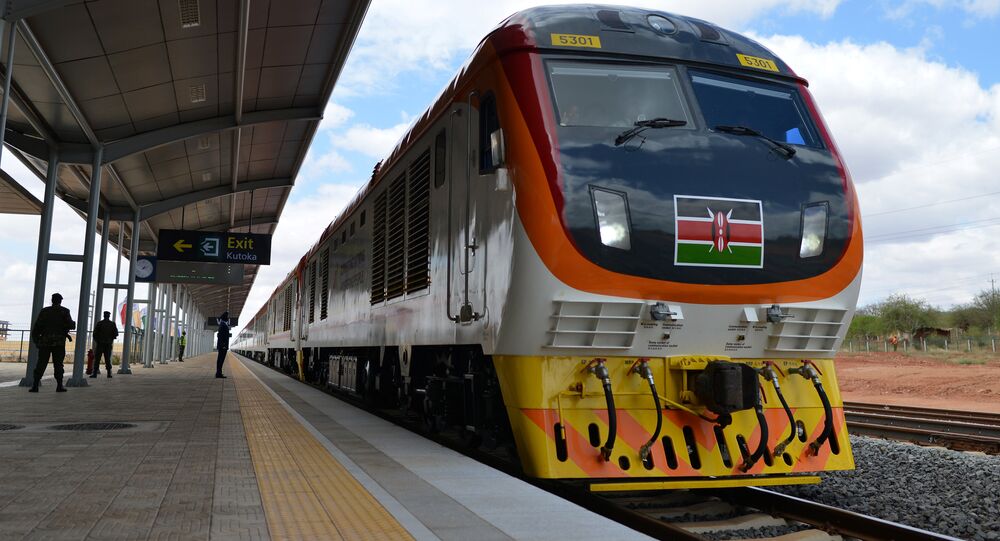 Earlier this week, a ceremony took place to launch the Mombasa-Nairobi Standard Gauge Railway, a major infrastructure project led by China in Kenya.

© AFP 2021 / SEYLLOU
Just Business: China Encroaches on Former French Colonies in Africa
As an integral part of the railway network in East Africa, the project is believed to significantly transform the economic landscape of the region.

The railway is the biggest infrastructure project in Kenya and a key component of the Kenya Vision 2030 development plan.

For landlocked Uganda, Rwanda and South Sudan, it creates the possibility to have access to the Indian Ocean via the port city of Mombasa. The next stage in the construction of the East Africa railway network is to connect the newly launched railroad to those three countries.

China is ready to invest nearly $4 billion in the project, with 90 percent of the sum already provided by the Export-Import Bank of China.

The new railroad will replace the Uganda Railway, commonly known as the Lunatic Express. It was built by Britain over a century ago and connected Lake Victoria with Mombasa. Currently, the railway is in a state of decay, with only parts of it remaining operational.

China continues to help East Africa create the economic base for political integration, according to Albert Khamatshin, an expert at the Institute for African Studies, at the Russian Academy of Sciences.

"Western countries are also presented on the continent, but they are not engages in such large-scale infrastructure projects. China has own economic and political interest to fund a railway in Africa. But it is not neo-colonialism. This railroad project is very important for development in East African countries. It increases their reputation on the continent and China’s reputation in Africa," Khamatshin told Sputnik China.

© AFP 2021 / Zacharias ABUBEKER
China Ramps Up 'Railway Diplomacy' in Africa Seeking Power Projection
According to the expert, the reason behind neo-colonialist allegations against China is the fact that the West is "losing its influence in Africa to China."

"Neo-colonialist rhetoric is unjustified. In the last two decades, there have been increased integration efforts in Africa. Initially, the process was complicated by the lack of modern infrastructure routes between countries. The new railway is a major step to accelerate regional integration in Africa. This project is very important for the East African Community, one of the most developed blocs on the continent," Khamatshin pointed out.
He underscored that China is currently laying the groundwork for economic integration in Africa.

"Initially, integration was political and commonly it had no economic basis. After China entered the region with its railway project Africa is ready to add the economic dimension to its integration process," the expert said.

According to him, cooperation between China and Africa generate advantages for both sides. At the same times, the project is not very beneficial for Beijing in terms of financial gains because China builds the majority of infrastructure as aid.

"Neo-colonialist claims are groundless. The railway in Kenya is an important component of the One Belt One Road project. It is a long-term initiative and it is very important for regional economic development. China is aiding Africa in different ways, including developing infrastructure. Infrastructure is the basis of cooperation between China and Africa. This is mutually beneficial cooperation," Wang said.

© AFP 2021 / AMIR QURESHI
China 'Taking Control' Over Infrastructure Centers of Asian Economy
The Mombasa-Nairobi railway was constructed by China Road and Bridge Corporation (CRBC). It is the first railroad outside China to operate and maintain in compliance with its domestic standard.

The Chinese company has an agreement with Kenya Railways Corporation (KRC) on maintaining the railway and its rolling stock. Moreover, CRBC will share technology with Kenya and prepare local specialists.