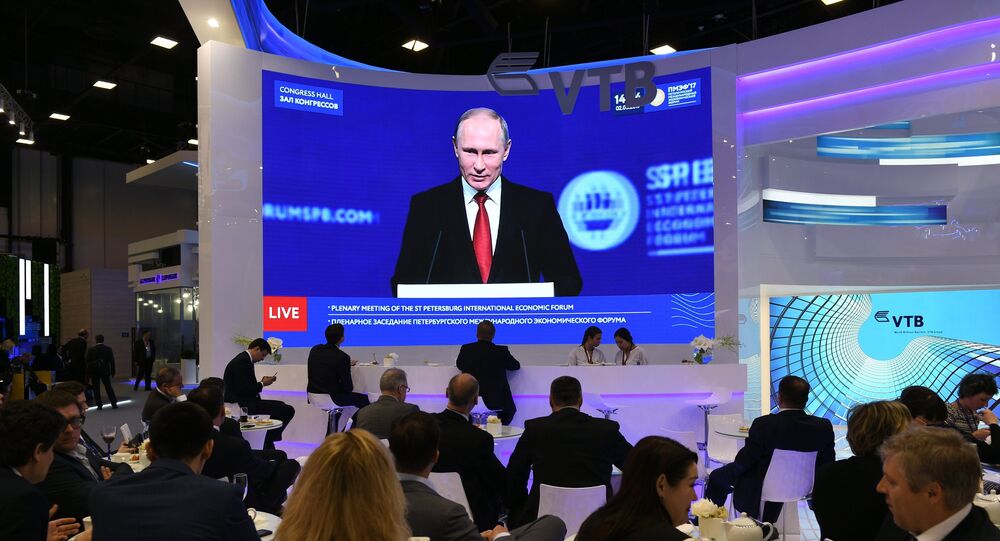 Issues Discussed by Putin and Foreign Businessmen at SPIEF Revealed

Representatives of foreign business circles focused on the discussion of their ideas on improvement of their projects in Russia at a Friday meeting with President Vladimir Putin on the sidelines of the St. Petersburg International Economic Forum (SPIEF), Russian Trade and Industry Minister Denis Manturov said.

ST. PETERSBURG (Sputnik) — SPIEF, a major global platform for communication between business representatives and discussion of crucial economic issues, kicked off in Russia’s St. Petersburg on Thursday and will continue through Saturday.

"They talked for the most part not about the problems, but about the ideas that the [foreign] business has on the improvement of the projects that they are implementing," Manturov told reporters following the meeting.

© REUTERS / Grigory Dukor
Putin on Allegations of Russia's Interference in US Election: 'Just Stop'
During his address at a plenary session earlier in the day, Putin said that foreign investors and experts have noted high quality of Russia's macroeconomic policy. The investment growth into Russia exceeds GDP growth, this trend should be maintained, he said.

"A meeting and a detailed discussion of those projects that foreign companies are implementing in Russia took place. It was noted that business was developing in Russia despite all sanctions and political issues," Oreshkin told journalists following the meeting.

"The sides discussed many specific questions… New projects were discussed. [It was] a constructive business conversation aimed at developing the Russian economy," the minister added.

"Businesspeople from different countries took part in the meeting, they spoke about their businesses, of the way they work in Russia. The investment climate was given a generally positive assessment. The meeting was of a constructive nature," Siluanov said.

Sputnik News Agency is the official media partner of the forum.