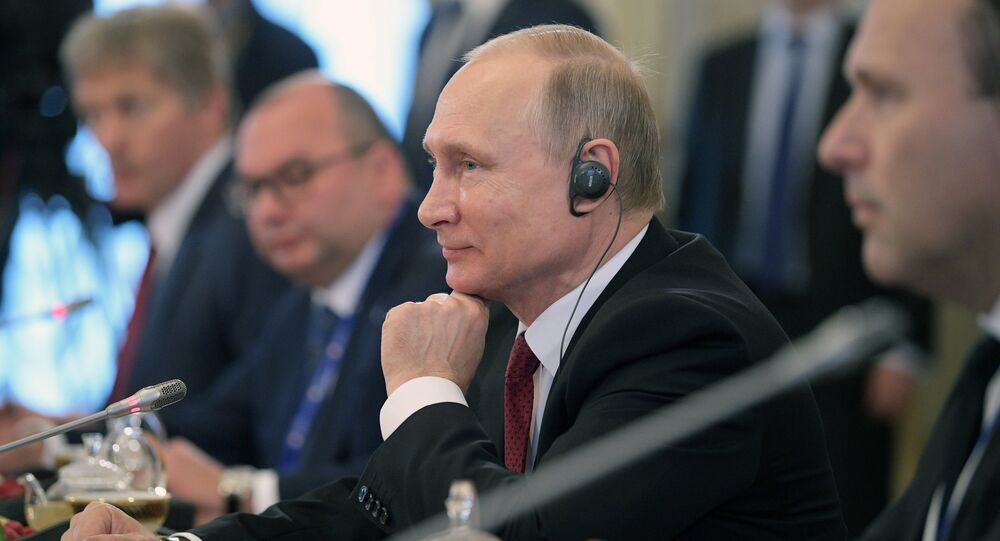 Christoph Leitl, president of the Austrian Federal Economic Chamber attended the International Economic Forum in St. Petersburg with his delegation. In an interview with Sputnik Germany, he explained how Europe and Russia could develop fruitful economic relations and shared his new idea that he would like to present to President Vladimir Putin.

© Sputnik / Igor Zarembo
Russia, Austria to Cooperate in Fighting Transnational Crime, Terror - Minister
Leitl noted that the St. Petersburg economic forum is one of the most important business events worldwide and for Austria, in particular.

"We want to further improve and intensify our very good bilateral economic contacts and strengthen the very friendly contacts with our Russian partners, especially President Putin," the entrepreneur said.

According to Leitl, contacts between Russia and Austria could be intensified in spite of the sanctions.

"Of course, it would be better for all of us if there were no sanctions. But the economy learns to exist in the given conditions and make the best of it. A lot of good things have already been achieved and there will be much more of them," Leitl said.

© Sputnik / Stringer
German Foreign Ministry Concerned About Kiev's New Anti-Russian Sanctions
In his opinion, anti-Russian sanctions proved to be ineffective and failed to force Russia to take the political steps desired by the West.

"I've said from the beginning that it's a mistake and nonsense. My opinion has only been confirmed so far," the entrepreneur said. "But perhaps there will be a time of rethinking when one sees how America and Europe drift away from each other. This also could be a time when Russia and Europe come closer," Leitl concluded.

The businessman also shared with Sputnik Germany an idea he would like to discuss with Russian President Vladimir Putin personally.

"I would like to propose to President Putin that we should start a Sochi dialogue between economy, science, education, tourism, technology and culture, and organize a big forum once a year — a stimulating meeting during which we could act independently from the sanctions and contribute to positive investments, economic development, as well as know-how exchange," Leitl said.

The businessman also shared an idea of creating a free trade zone that would include most of Europe and Russia.

"Yes, we have an idea of a free trade zone from Lisbon to Vladivostok. I am convinced that this idea would be advantageous for all parties, especially in terms of the global competition. I believe that the economy can have a positive impact in the areas where politics reached a deadlock," Leitl said.

The International Economic Forum kicked off in Russia's city of Saint Petersburg. The three-day meeting will bring together around 40 ministers from 26 countries, as well as top businessmen and representatives of various international organizations.