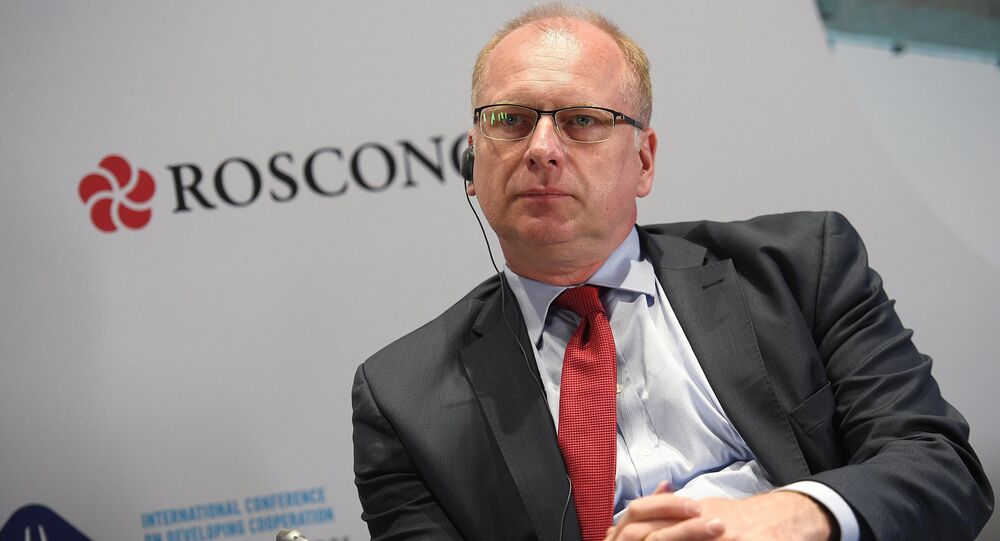 According to the CEO of the Association of European Businesses in Russia, European companies working outside the banking sector in Russia feel no effect of Western sanctions.

"Talking about the Western sanctions, the ones that are really relevant are the financial sector sanctions. These certainly have an effect on the European banking sector and its activities here in Russia. But if you talk about other companies in the manufacturing or service sector, this has a very limited effect on them. If you talk to our member who work in a non-banking sector and ask them about the sanctions, the vast majority would say that sanctions do not have any formal effect on them, which in the end is good," Schauff said.

© Wikipedia / BotMultichillT
American Chamber of Commerce in Russia Notes Stability in US-Russia Business Ties
According to him, European companies continue to work in Russia despite problems.

"It’s good news… Business has accepted that there is a political problem, which needs to be solved," Schauff said.

The current oil prices are satisfactory for the European businesses working in Russia, Frank Schauff said.

"Russia is a difficult economy, the oil price defines a lot of other economic indicators. The oil price is very hard to predict, but most probably I would say an oil price which is a good one is around the current price, maybe a little bit lower, for the reason that a low oil price leads to a lower exchange rate of the ruble, which increases the competitiveness of the Russian industry," Schauff said.

He added that high oil prices damage competitiveness and diversification in the industry.

"It’s better to have a medium oil price which allows the Russian consumers to buy imported goods and allows the industry to export," Schauff stated, adding that the current oil price is "not bad."

The Association of European Businesses represents interests of the European companies conducting business in Russia. The organizations is engaged in promotion of business activities and economic integration between Russia and the European Union, as well as in improvement of business and trade environment.

SPIEF, held in Russia's second largest city of St. Petersburg between Thursday and Saturday, is a major global platform for communication between business representatives and discussion of crucial economic issues. Sputnik News Agency is the official media partner of the forum.