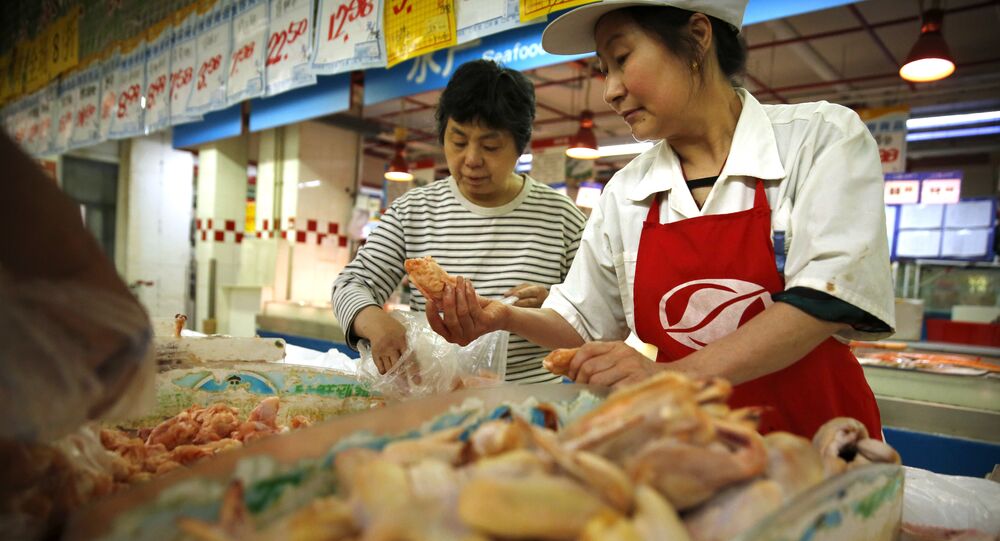 Doomed to Fail? US Tries to Muscle in on Chinese LNG Market in New Trade Deal

The US new trade deal with China is a "huge win" for US credit card companies and other service exporters, but efforts to enter the Chinese LNG market are likely to end in failure.

© AFP 2021 / Luis Acosta
Changing Sides? Mexico May Focus on Trade With China Amid Tensions With US
Last month, Chinese President Xi Jinping visited Washington to begin talks on economic cooperation with US President Donald Trump, who had repeatedly criticized the US trade deficit with China during his presidential election campaign.

On Thursday, US Commerce Secretary Wilbur Ross revealed the fruits of those trade talks. The trade agreements, which are set to enter force by July 16, will allow US firms more access to the Chinese market for goods and services.

Analysts said that the agreements, which are part of a "100-day action plan" announced by Trump and Xi last month, seem to represent a win for Trump and some compromise from China.

Despite Trump's threats, the volume of US exports to China makes the prospect of a trade war unpalatable to Washington, too. While the trade deficit in goods and services last year was $309.6 billion in favor of China, the US exported $169.3 billion, making China the country's third largest export market after Canada and Mexico.

"This is certainly a breakthrough for Trump, since it will clearly reduce the US trade deficit with China. According to our estimates, it will be reduced by 5-10 percent, if the US continues to expand trade in other sectors of the economy," Vadim Merkulov, an analyst from Russian investment firm Freedom Finance, said.

© AFP 2021 / HOW HWEE YOUNG
Global Leaders That Have Endorsed China's One Belt, One Road Initiative
The agreements cover ten areas, including agriculture, energy and financial services. Meat exports is one area of compromise, with China agreeing to allow beef imports from the US, while the US is to allow Chinese cooked poultry to its market.

Other winners are US credit card firms, which will be allowed to begin the Chinese licensing process and rival China's UnionPay system, which has enjoyed a near-monopoly there.

"This is a huge win for Visa, MasterCard and American Express. A huge, fast-growing Chinese market has opened up for these companies. Americans will get a share in the huge volume of non-cash payments in China, and the Chinese get the opportunity to pay with plastic outside mainland China without any problems," Merkulov added.

In addition, China is to allow foreign-owned firms in China to provide credit rating services. The agreement also stipulates that China will issue bond underwriting and settlement licenses to two qualified US financial institutions.

In an interview with Bloomberg, Ross trumpeted the agreement as a historically good deal.

"This is more than has been done in the whole history of US-China relations on trade," Ross declared.

In turn, China's Deputy Finance Minister Zhu Guangyao described the agreements as "balanced" during a briefing in Beijing.

"The 100-day China-US economic plan is a plan of cooperation, a plan of actions and a plan of win-win arrangements," Zhu said.

© Photo : goldenpassterminal.com
Golden Pass LNG Terminal on the Sabine-Neches Waterway in Sabine Pass, Texas
Ross also said that the US is hoping to export liquefied natural gas to China, which has agreed to allow private and state-controlled companies to import US LNG.

Australia and Qatar are currently the biggest exporters to China, but China has also invested heavily in Russian LNG. In April 2016, Chinese banks agreed to provide over $12 billion in financing for the Yamal LNG project in Sabetta, north-east of Russia's Yamal Peninsula.

In May 2014, the China National Petroleum Corporation signed a deal with Russian natural gas producer Novatek to supply the Chinese market with three million tons of liquefied natural gas annually for 20 years from the Yamal LNG.

© AP Photo / Ng Han Guan, File
US Saber-Rattling Over North Korea Aims to Cripple China's Global Economic Plans
The higher price of US LNG and the cost of transportation mean that it is unlikely to rival the market share of LNG from Russia or other, closer, exporters, Korobkov said.

"Now, the wholesale price of natural gas at Henry Hub, the largest US gas [distribution] hub, is 3.37 dollars per 1 million BTU, or $120 per thousand cubic meters. Taking into account the costs of liquefaction and transportation, this price could increase by 50 percent."

Despite the financial disadvantage of US LNG, Kapustiansky remarked that the US may try to force China to buy its LNG in return for political concessions. For example, Washington may offer to refrain from further exacerbating the strained situation in the Korean peninsula in return for gas purchases.

"China might buy more expensive gas from the US in exchange for support in the region regarding the North Korea issue, or the signing of new trade agreements," Kapustiansky explained.

As Trump's Rhetoric Pushes US Manufacturers Out of Mexico, China Leans In

US Environmental Agency Scientists Resign to Protest 'Obfuscation' of Research