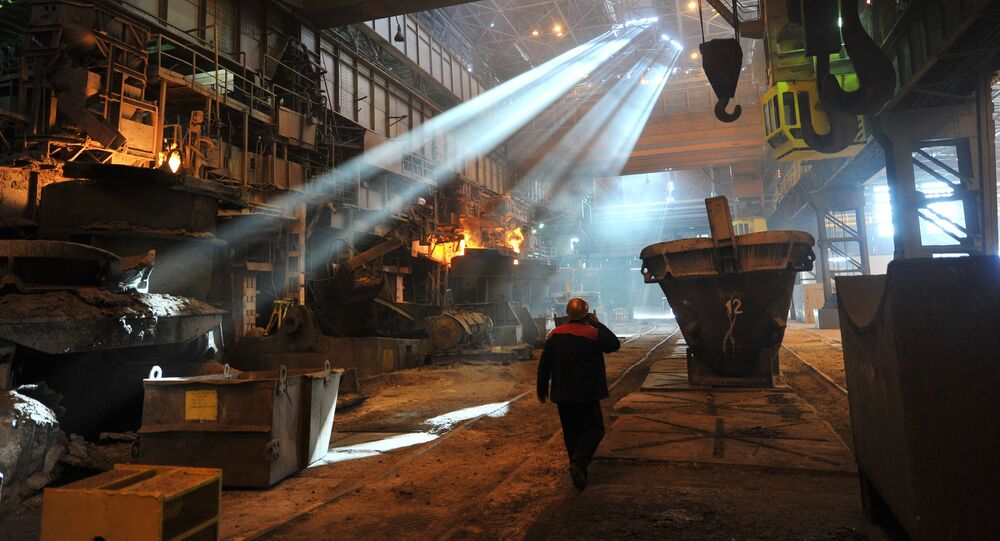 The Russian economy is expected to grow 1.2% in 2017, climbing to 1.4% annual growth in 2018, according to a new report from the European Bank for Reconstruction and Development (EBRD). The Bank's 'Regional Economic Prospects' summary for May associates growth with a rise in oil prices, a recovery in consumer demand and growing investment.

According to the EBRD report, Russia is slowly but surely recovering from the recession it has faced over the last two years, with positive growth forecast for 2017 following an estimated 2.8% drop in GDP in 2015 and a further decline of 0.2% in 2016.

"Russia's economy is projected to return to moderate growth after a cumulative output decline of 3 percent in 2015-16," the report noted. It indicated that in addition to stabilizing oil prices, Russia has benefited from increased capital flows into its bond and equity markets, including in the first months of 2017. The report also praised the Russian Central Bank's efforts to fight inflation, and their success in bringing inflation down to 4.3% in 2016, which compares well against the peak inflation rate of 16.9% in March 2015.

© Sputnik / Grigoriy Sisoev
Russia Effectively Shields Population From Sanctions' Effect - UN Rapporteur
The Bank also admitted that the return to growth in Russia would have positive knock-on effects for other countries in Eastern Europe, and particularly for those post-Soviet states which rely on worker remittances from Russia.

Pushing its own agenda, the EBRD emphasized that Russia needs to aggresively pursue reforms to support investment. Furthermore, in the face of continued geopolitical tensions and Western sanctions, annual growth will remain only "at around 1 to 2 percent annually" over the long term "due to low investment," the Bank said.

The EBRD isn't the only major institution to have offered a positive assessment of Russia's growth prospects recently. Last week, the International Monetary Fund published its own report, explaining that the Russian economy was on the road to recovery amid stabilizing energy prices, an uptick in private consumption and growth in manufacturing and credit. This followed on a report released last month, which revised earlier 1.1% and 1.2% growth forecasts for 2017 and 2018, respectively, to a forecast of 1.4% per annum in the same period.

© Sputnik / Ramil Sitdikov
Pedal to the Metal: Russian Commercial Truck Sales Jump Whopping 40%
Gurdgiev explained that in both the manufacturing and services sectors, the Russian economy's Q1 2017 performance outpaced global economic momentum, with Russia becoming "the strongest BRIC economy for the fourth consecutive quarter." The economist explained that the ruble too has enjoyed stabilization, appreciating by about 6.6% against the US dollar and 3% against the euro in the last three months. This trend, he said, serves to help curb inflation, which "in turn increases private and fiscal purchasing power." In 2016, the ruble had appreciated nearly 19% against the US dollar, stabilizing significantly following a steep depreciation against the currency in 2015.

Russian economic officials are even more optimistic, confirming that the country is on track to meeting its target of 4% annual inflation; the Federal State Statistics Service has reported that inflation was down to 4.1% (annualized) for the month of April, while the Ministry of Economic Development expects it to drop to 3.8% in May.

Ultimately, the Ministry expects Russian GDP growth to reach 2% in 2017, surpassing both the EBRD and IMF forecasts.

© Sputnik / Alexandr Kryazhev
Obama's Sanctions Keep on Giving: Russia Enters Agricultural Renaissance Thanks to Restrictions
Last month, Economic Development Minister Maxim Oreshkin said that the economy could reach an annual growth rate of 3%, but that this would require additional investment of about 5 trillion rubles ($87.5 billion) per year.

The minister explained that the government and Vnesheconombank, a state-owned development bank, are now working on a program of project-tied lending to help finance targeted development and minimize risks to investors at the different stages of the investment process.

Beyond Tomatoes: What Will Improved Bilateral Ties Mean for Russia and Turkey?

Russia Not Yet Considering Leaving EBRD as Shareholder - Economy Minister

Playing the Long Game: Russia, EU Should Brace for 'Decades Worth of Sanctions'

Finland Cheers as Trade Picks Up After Russian Market Turnaround