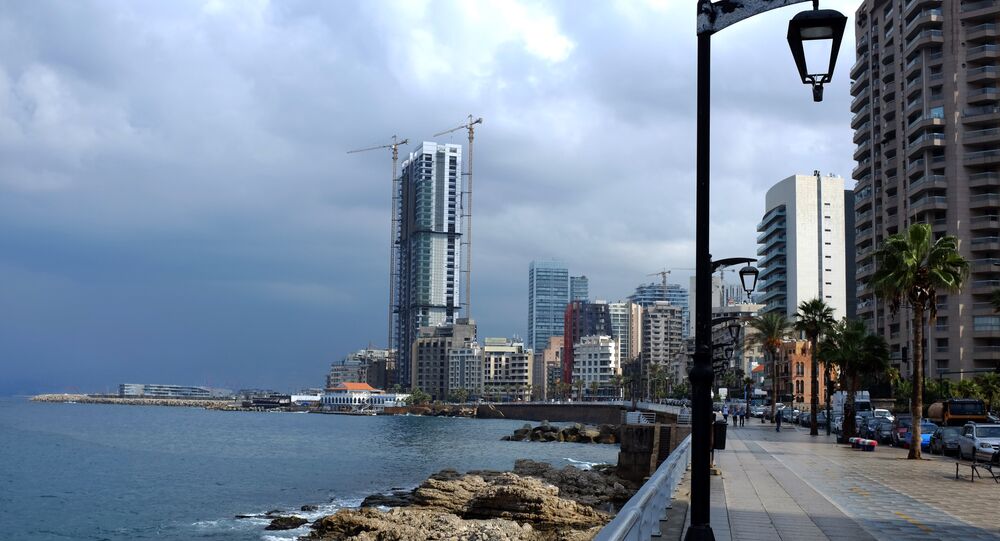 Lebanon's economy minister expressed hope that the trade with Russia would grow threefold within tow or three years.

MOSCOW (Sputnik) — Lebanon is hoping to boost its trade with Russia threefold to some $1.5 billion within two to three years by increasing exports, Lebanese Minister of Economy and Trade Raed Khoury told Sputnik on Wednesday.

"Now, the trade is around $500 million on Russia's side and Lebanon $10 or $20 million. It makes me happy if we go to eventually in 2-3 years to around $1.5 billion and Lebanon [exports] go to around $700 million for our products," Khoury said on the sidelines of a business summit hosted by the Russian-Lebanese Business Committee in Moscow.

He explained that Beirut would like to boost its exports of agricultural products, such as olive oil and juices.

"If we reach this figure and we will try to work to have this figure in front of us — we'll be very happy," the economy minister added.

© AFP 2020 / PATRICK BAZ
Lebanese Minister: Russia's Role in Mideast 'Annoying to Old Colonial Powers'
Russia's embargo on EU imports imposed in 2014 briefly increased trade relations between the two countries. However, the bilateral trade volumes have since been dropping, amounting to some $540 million last year, compared to $800 million in 2014, according to the Russian Federal Customs Service data.

The minister explained the drop by the recent dip in energy prices, with oil and gas making up much of bilateral trade, as well as the political turmoil in Lebanon which left the country in paralysis with no president for two years. The impasse ended in late 2016 with Michel Aoun becoming the new president.

"The reason for [the drop in value of the total trade turnover] is two things. First, 70 percent of this amount comes from importation of fuel, gas and oil. The prices went down, as you know, so the value went down, although the amount has not gone down. So this is the first reason- because the price of oil went down. The second reason is because Lebanon's GDP has not been increasing lately because of the socio-political events," Khoury explained.

Beirut would like to sign bilateral agreements on the exchange of technology knowledge with Moscow and also hopes for Russia's investments in pharmaceuticals industry.

"We would like to have mutual agreements in transport of technology knowledge between the two countries. We would like [Russia] to invest in our pharmaceutical products as well," Khoury told Sputnik.

He added that the tourism industry and attracting Russian visitors to Lebanon were also on the agenda for Lebanon's relations with Moscow.

"In terms of products, we are looking for Russian tourism. We would like to see Russian tourists come to Lebanon, they are most welcome. Lebanon is a very important tourist destination with many advantages in the region" Khoury said.

The economic minister also emphasized the importance of mutual investments, especially in the banking sector.

Lebanon launched its first oil and gas production licensing auction in January, opening five of ten of its Mediterranean blocks up for international bids.

"We have now discovered gas in Lebanon and we would like for Russia to have a play there in the region, in our country… We would like Russia to participate in the bidding process," Khoury said.

He added that projects in fields of electricity, power, oil and gas were important for Lebanon's cooperation with Russia.

"In Lebanon, we are doing bids for reconstruction of big factories of energy, so we would like Russia to be involved to be part of this bidding process. If they win, I'll be very happy," Khoury noted.

The bidding for rebuilding of energy factories across Lebanon is set to start later this year, according to the economy minister.

Lebanon, together with Israel, Cyprus and Egypt, sits on the Levant Basin in the eastern Mediterranean, where new gas fields have been revealed in 2009. Lebanese exploration has been delayed since then due to political paralysis that left the country without a president for two years. The standoff was finally resolved last year when Michel Aoun became president. Two Lebanese offshore blocks now lie within a triangle of maritime territory claimed by Israel.

"We hope that Mr. Putin and Mr. Aoun will meet in the near future to confirm this [Russian-Lebanese] economic partnership and to develop this strategic relation," Khoury said.

The minister added that after returning to Lebanon he would meet with Aoun to update him on the Moscow visit and discuss the potential meeting between the two presidents.

"The president has strong feelings and relations towards Russia and he always expresses this in public. I will ask him about this potential visit which I think he is either [already] preparing for it or he will prepare for it, definitely," the economy minister said.

Beirut's trade turnover with Moscow has suffered from falling oil prices in recent years, totaling approximately $540 million last year, compared to $800 million in 2014, according to the Russian Federal Customs Service data. However, bilateral trade showed an upward economic trend in January, partly due to the recovery of oil prices.

Khoury told Sputnik that his ongoing visit to Moscow would hopefully help the country establish economic cooperation with Russia paving the way for its involvement in rebuilding Syria.

The Lebanese delegation including Khoury, Minister of Industry Hussein Hajj Hassan, Tourism Minister Avedis Guidanian arrived in Moscow earlier in the day to participate in an inaugural Russian-Lebanese business forum and to conduct high-level meetings with Russian officials.

"I can see that the potential partnership between the Lebanese and the Russian business people, especially not only trade but investments in Lebanon in preparation for the reconstruction of Syria is for me clear and makes perfect sense. So we hope that this visit will initiate this economic relation," Khoury said.

Lebanon has the biggest advantage in becoming a base for rebuilding its war-torn neighbor due to its proximity and strong economy, the minister emphasized.

"Lebanon could be one of the most strategic economic partners with Russia for the Middle East and Africa. Geographically it's well placed, it has a free economic system and stability and Lebanon has strong ties with all Arab regions, especially Syria and Iraq and can play instrumental role in the redevelopment and reconstruction of Syria and Iraq," Khoury said.

Since the beginning of the military crisis in Syria in 2011, Russia has been supporting Damascus in the fight against terrorist groups and providing Syrian civilians affected by the conflict with medical help and regular humanitarian aid deliveries to help them survive until peace is restored.