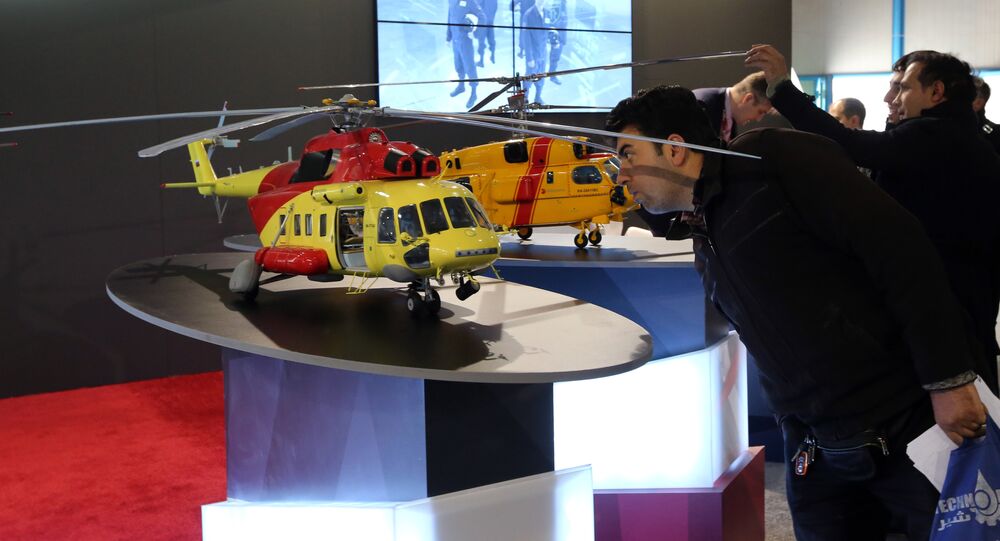 Iranian-Russian trade relations are set to rise further this year after increasing almost twofold in 2016, Alexander Maksimov, honorary representative of the Russian Chamber of Commerce and Industry in Iran, told Sputnik.

© AP Photo / Richard Drew
Ahmadinejad's Back: Ex-President Registers to Run in Iranian Election
In 2016, the volume of trade between Russia and Iran increased by 70 percent in comparison with the previous year, thanks to the removal of barriers to trade, Alexander Maksimov, honorary representative of the Russian Chamber of Commerce and Industry in Iran, told Sputnik.

Last year's bilateral trade was worth $2.2 billion, most of which was comprised of Russian exports of machinery, equipment, transport, food and metals. Iranian food exports to Russia made up just $0.3 billion of the trade balance.

"We think the increase in trade is connected with the improvement in bilateral relations between our countries and the growing interest from Russian and Iranian businesspeople in joint commercial activities. In addition, the two governments are creating the necessary trade conditions with the opening of specialized banks, joint ventures, free trade zones, free economic zones, the restoration of transport links and the introduction of new measures including the creation of 'green corridors' and the easing of the visa regime," Maksimov said.

In January, Russian exports to Iran of machinery increased by 7 percent and high-technology goods by 3.7 percent in comparison with a year earlier. The Russian Chamber of Commerce and Industry is keen for the increased co-operation to continue and to this end wants to see Iran undertake measures to further ease bilateral trade, including a relaxation of its customs regulations.

"In 2017, there has been a sharp increase in the above sectors primarily due to recently signed contracts in the transport sector (for the construction of roads and bridges), for high-technology equipment including oil production and refining, as well as new contracts for the repair of aviation and rail equipment and energy systems, for example, in the nuclear sphere."

"Trade turnover can also be increased without additional state intervention, however, it is very important that Iran reduce customs duties and remove non-tariff barriers, such as the requirements for additional certificates and limits on the supply of Russian wheat, which led to a sharp reduction in the volume of Russian exports in 2016."

Maksimov said that a range of projects are being planned which will further increase bilateral trade in the transport and energy sectors.

"The implementation of joint industry projects in the coming years, particularly the participation of Russian oil and gas companies in the development of 11 deposits in Iran, will increase the amount of bilateral trade between our countries up to $10 billion."

© REUTERS / President.ir
Iran's Homegrown Bavar Ground-to-Air Missile System Still Lags Behind S-300
Russia and Iran have also been stepping up their co-operation in the services industry. Last autumn Russian banks said they were making preparations to enter the Iranian market following the lifting of sanctions associated with Iran's nuclear program.

In December, Russia Energy Minister Alexander Novak told the Iran-Russia Trade Conference that the two countries' central banks have been are working closely together and allowed ten large banks to resume activities in Iran and Russia, Mehr News reported.

Bahram Amirahmadiyan of the Russia-Iran Friendship Society told Sputnik Persian that further banking co-operation between the two countries would enable them to carry out bilateral trade in local currencies rather than in dollars or euros.

"Of course, the prospect of Russian banks opening in Iran is very attractive and important because it can widen and improve our economic cooperation. At the moment, all banking operations between Russia and Iran are carried out in dollars or euros. It's very inconvenient, because all these operations are controlled either by the EU or US central banks," Amirahmadiyan said.