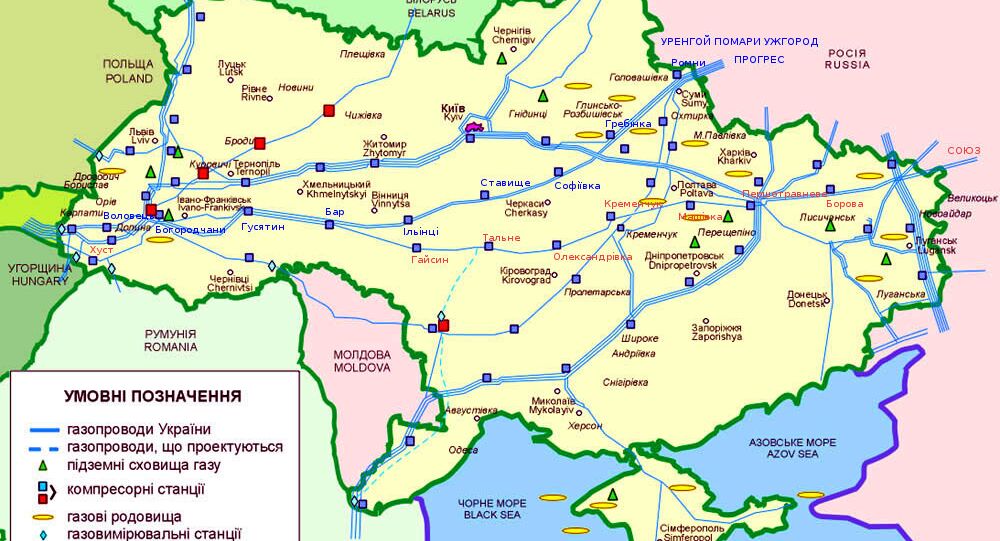 Gazprom's projects aimed at bypassing Ukraine amid the ongoing crisis facing that country have put Kiev's status as a transit state in jeopardy. Experts warn that a perfect storm of negative factors is making it increasingly likely that the value of Ukraine's impressive network of pipelines will soon be equivalent to that of scrap metal.

This week, Russia and Ukraine's years-long legal row over gas prices and delivery terms took a new turn, with Naftogaz chief commercial officer Yuri Vitrenko revealing that Gazprom may claim up to $80 billion from Kiev at arbitration hearings in Stockholm. The Russian energy company initially sued Naftogaz in 2014, making the claim that Kiev had not paid for supplies it had received in 2013 and 2014, and switching the country to a prepayment scheme. Ukraine responded with a counter-suit, demanding a retroactive revision of prices, and that Gazprom compensate Naftogaz for sums it allegedly overpaid.

© AFP 2020 / ANDREY GOLOVANOV
Russia's Gazprom Seeks $50Bln at Stockholm Arbitration Hearings - Ukraine's Naftogaz
Last year, Naftogaz's own financial accounting indicated that it had an outstanding debt to Gazprom of nearly $8 billion for the period between 2009-2013, with Gazprom calculating that the figure was actually $26.7 billion only for the years 2012-2014.

The Stockholm arbitration court is expected to make its final decision on the dispute at the end of this month and, according to most analysts, Gazprom stands the better chance of winning, given the solid case it has presented. This in turn has left Naftogaz officials nervously pondering about where they will be able to get the money for the settlement; the company, already paying 20% more for 'European' gas supplies (most of which is really Russian gas resold to Kiev by European companies), is drowning in debt as it is.

On Wednesday, Naftogaz director Vitrenko admitted that in case of a loss to Gazprom in Stockholm, Naftogaz will face bankruptcy, and may be forced to sell off its assets, with the exception of its pipeline infrastructure, which belongs to the state.

Speaking to Radio Sputnik, Professor Igor Yushkov, a senior expert at Russia's National Energy Security Fund, warned that even if the arbitration court comes to a compromise decision, Naftogaz may still go bankrupt.

"Naftogaz," Yushkov stressed, "does not have $80 billion; they do not have the $50 billion which Gazprom has already calculated in its claim. And even if we subtract the [approximately $14 billion] demanded by Naftogaz from Gazprom, they still do not have so much money. Gazprom's claim against Ukraine, if I'm not mistaken, exceeds the entire budget of Ukraine. Therefore, even in the case of some kind of compromise solution, Naftogaz will go bankrupt."

© AP Photo / Sergei Chuzavkov
Berlin Trying to Sneak Ukraine Gas Transit Guarantees into Nord Stream II Deal
The expert noted that even without Gazprom's claims, Naftogaz's financial situation is very difficult. Ukrainian households aren't a good source of profit. Industrial and business consumers, meanwhile, are switching to private companies. Meanwhile, political decisions taken by Kiev mean that Naftogaz is spending $230-240 per thousand cubic meters of 'European' gas, compared to the $180 it would have paid if it had kept its contract with Gazprom. Ukraine stopped buying gas from Russia in 2015.

Furthermore, Yushkov explained that Ukraine's "pipeline system is outdated; it needs to be repaired, but there's no money. Without guarantees that the pipelines will be loaded up in the long term, no one is going to come and invest the necessary funds – neither the Europeans nor Ukrainians themselves. So I think that the history of Ukraine's status as a transit state is coming to an end, and after 2019 [when the transit contract with Gazprom expires] it will be unlikely to get any long-term transit contracts."

© Sputnik / Sergey Guneev
Nord Stream 2 Not Directed Against Any of Our Partners - Putin
For his part, Radio Sputnik contributor Oleg Obuhov suggested that in light of the impending crisis, even the state's principle of holding onto the pipeline network may be jettisoned, with the network sold off to the highest bidder.

"Naturally, Gazprom's participation will be immediately rejected, but European and American companies will be invited to participate until Kiev tires of asking."

In principle, Obuhov noted, "there is interest in the Ukrainian gas transit system. For example, German companies Ruhrgas and E.O. have long had their sights on it. But these pipelines have value only if Russian gas is pumping through them. And since [the construction of] Nord Stream 2 is approaching, the value of the Ukrainian system is falling to near the cost of scrap metal."

© Photo : turkstream.info
Turkish Stream: Prospects of Delivering Russian Gas to Europe Bypassing Ukraine
Obuhov too stressed that it seems unlikely for any company, Ukrainian or otherwise, to buy the network, much less invest the necessary funds in its upkeep and modernization.

"After 2019, it's hardly worth expecting any long-term contracts for gas transit through the Ukrainian network. Poland has announced that it will buy re-exported Russian gas from Germany. Looking at Warsaw's example, other of Ukraine's neighbors will support the initiative. The once-needed gas networks will become redundant, after which those who know how will come and pull it apart. After all, waste not, want not," the observer concluded.

Thus the history of Ukraine's energy transit network, which provided most of Eastern Europe with its gas supplies during the Soviet period, and gave Ukraine about $2 billion per year in transit fees in the post-Soviet period, will come to an end.

Nord Stream 2 Not Directed Against Any of Our Partners - Putin