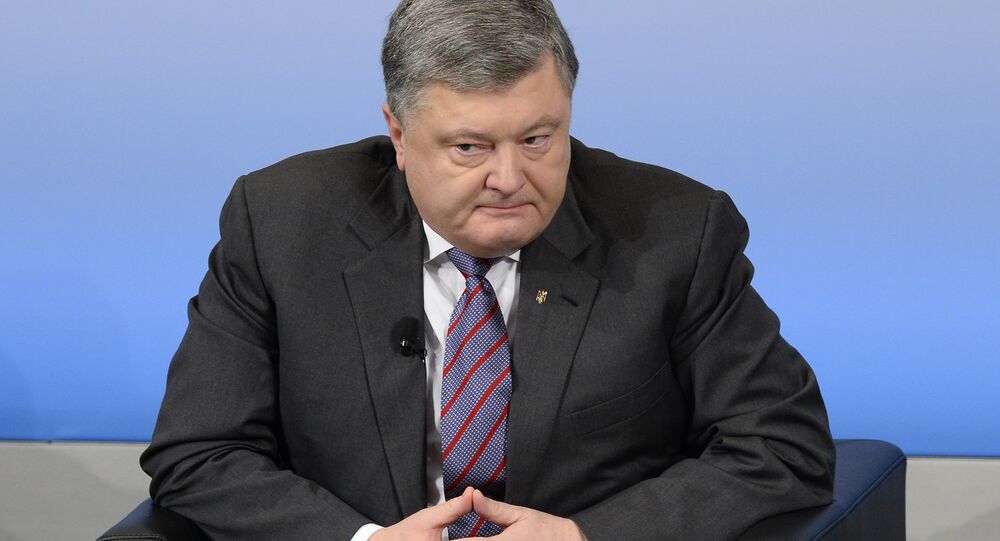 The Ukrainian government has been concerned over a recent decision by the International Monetary Fund (IMF) to postpone the review of the third financial tranche for Kiev.

IMF Puts $1 Bln Tranche to Kiev on the Backburner

"The IMF Executive Board postponed for a short period looking into the third review of increased loans to Ukraine, which was planned for Monday," the Ukrainian Finance Ministry said in a statement.

The planned meeting was expected to result in the disbursement of a $1 billion loan to Ukraine.

© AFP 2021 / WOJTEK RADWANSKI
Kiev Lost Control Over Donbass Due to Blockade - Poroshenko
The ministry also clarified that the delay was due to the need to re-evaluate the economic consequences stemming from a cargo blockade imposed by Kiev against the self-proclaimed Donbass republics.

The blockade of railway tracks between the self-proclaimed Donbass republics and Ukraine began in late January by former participants of military operations in Donbass. It has led to disruptions in deliveries of anthracite coal to Kiev-controlled territories.

© AFP 2021 / TOBIAS SCHWARZ
On the Precipice: Poroshenko's Own Gov't, US, EU Attack Him Over Donbass Blockade
The blockade led to irregularities in supplies of anthracite coal from Donbass, leading to power shortages in Ukraine and prompting Kiev to declare an energy emergency.

Last week, President Poroshenko legitimized the blockade, having signed a decree to terminate cargo transportation with Donbass areas not controlled by the Ukrainian government.

Meanwhile, Finance Minister Alexander Danilyuk expressed hope that the delay would be short-term and the government would manage to resolve the difficulties as soon as possible.

The decision by Poroshenko to legitimize the blockade has been criticized by France, Germany and Russia.

In addition, the United States warned that the move could have a negative effect on the implementation of the Minsk peace agreements to resolve the Donbass conflict.

"We are constantly monitoring this blockade in eastern Ukraine. With respect to the Minsk agreements, I think it is a fluid situation, but it is one with potentially serious consequences, and that is why we want to see this resolved," US Department of State spokesperson Mark Toner said at a press briefing.

In turn, Poroshenko commented on the delay of the third IMF tranche, saying it was a result of the Donbass blockade.

"On Saturday, the review of the matter was removed from the agenda of the IMF board of directors. This is a result of the current political risks. The reason was the consequences of the blockade," the Ukrainian president said.

© AFP 2021 / TOBIAS SCHWARZ
Wake-Up Call: IMF Delaying New Loan to Ukraine Signals Major Shift in West's Stance Towards Kiev
Poroshenko added that the next tranche from the IMF is crucial for Ukraine to replenish the country’s gold and exchange reserves and to maintain the hryvnia exchange rate.

On Tuesday, The National Bank of Ukraine said it has downgraded this year's economic growth from 2.8 percent to 1.9 percent to take into account the ongoing blockade in Donbass.

The regulator added it had provided the IMF with a new macroeconomic forecast needed to receive the next tranche of financial aid, taking the blockade into account.

Kiev Will Have to Wait

Andrei Zolotarev, director of the Ukrainian think-tank Third Sector, suggested that Kiev will finally manage to receive the money, but much later than the previously agreed deadline.

"The tranche is unlikely to be unveiled in the coming days. The IMF does not work day-and-night and Ukraine is not what it would discuss every day," Zolotarev told Sputnik.

© AP Photo / Sergei Chuzavkov
Kiev's Sanctions Against Russian Banks to Backfire on Ukrainian Economy
The expert also said that the IMF may tighten the terms of the next loan.

"The terms [were agreed in a memorandum between Ukraine and the IMF]," Zolotarev said, adding that the size of the loan may be reduced.

"A reduced tranche will not work. In the light of recent economic losses, Ukraine should discuss increasing the loan," he said.

Ruslan Bortnik, a political analyst and director of the Ukrainian Institute for Political Analysis and Management, also suggested that the loan will be provided much later and on different terms.

"I think that Kiev will receive the loan, but later. Possibly, its size will be reduced and the terms will get worse. The reason is that de facto Ukraine violated its agreements with the IMF. The blockade has changed the main economic indicators, including the fiscal deficit and inflation rate," Bortnik told Sputnik.